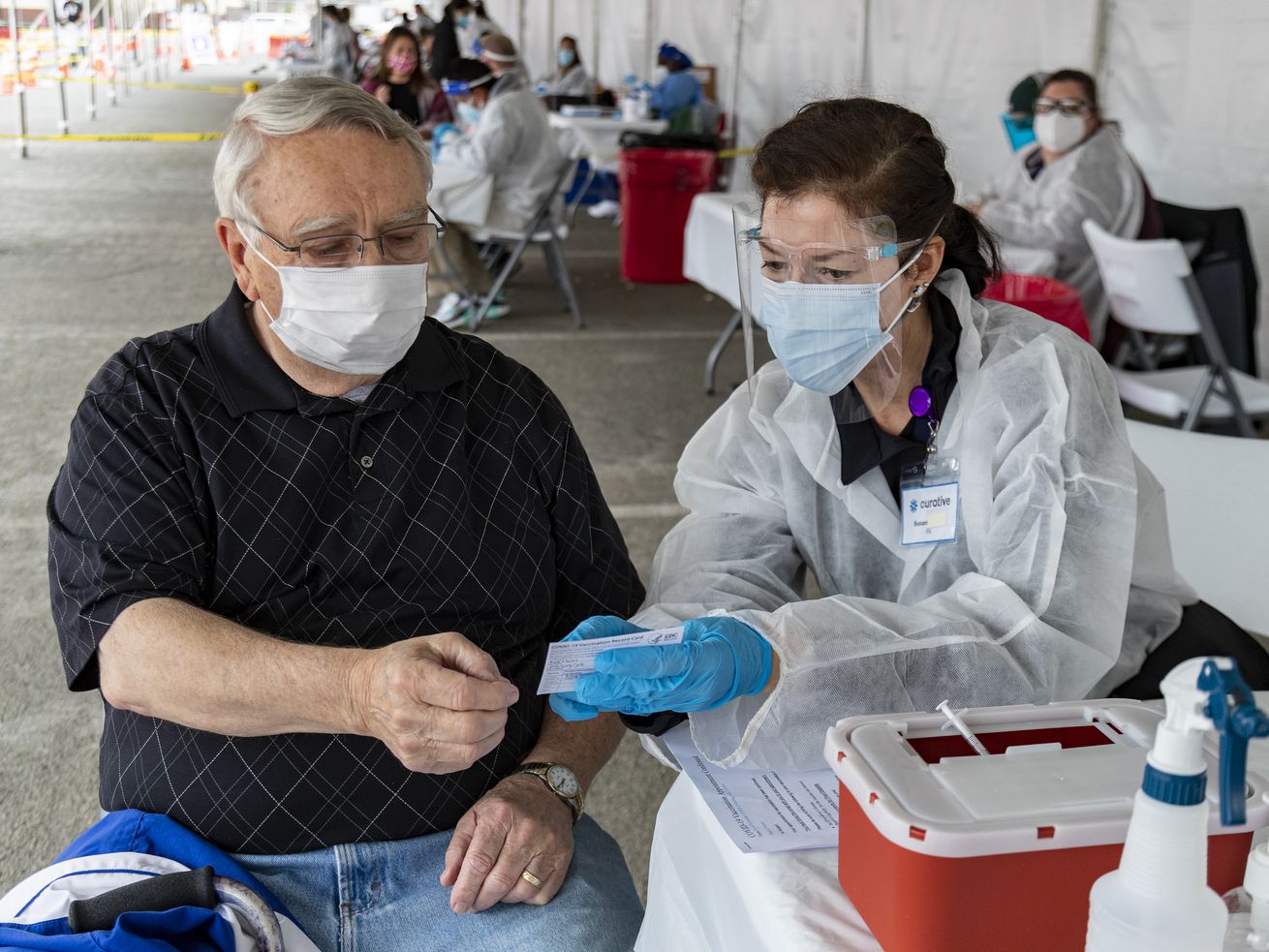 From forged vaccine cards to fake appointments, here are the online Covid-19 scams to watch out for.

Many Americans are eager to get the Covid-19 vaccine as quickly as possible. But that inevitably means there are scammers ready to use the internet to take advantage of these vaccine seekers to steal their money and personal information.

Similar to earlier in the pandemic, when fraudsters flooded the internet with ads for sketchy “cures,” bogus Covid-19 tests, and scarce personal protective equipment, online schemers are now selling fake vaccine appointments and knockoff vaccine cards. (These cards document the date that vaccinated people received their doses, the manufacturer of their vaccine, and its batch number; they’re seen as a record of vaccination.)

Vaccine schemes are alarming. In late January, one man in Washington State was arrested after advertising fake Covid-19 vaccines online for as much as $1,000, and even injected people with an unknown substance, according to the Department of Justice, which is investigating these types of fraud cases.

“We’re not surprised scammers are taking advantage of this opportunity because each of the states are rolling out the vaccine a little bit differently,” Sandra Guile of the Better Business Bureau, a nonprofit that focuses on consumer and marketplace trust, told Recode. The organization has warned people that posting images of their vaccine cards on social media — in order to celebrate their inoculation — is only making things worse. Not only are these images making it easier to copy the cards, but social media users are also exposing their personal information and making themselves more vulnerable to identity theft.

The target audience for fake vaccine cards is people who think the cards might help them move around and travel more quickly — or avoid getting vaccinated. Tracy Walker, who lives in Hawaii, told Recode that one of her neighbors has been using their personal Facebook page to offer others fake vaccination cards, which were — according to the post, which was viewed by Recode — “[p]rinted on cardstock with laser.”

Right now, these cards are primarily being used as a way for people to record their own vaccination histories, and the card does remind users to keep it handy. It’s possible that this card might be used as proof of inoculation for other purposes sometime in the future.

Walker said she reported the post as “a fraud or scam” to Facebook, only to receive a notice that the post did not violate Facebook’s rules. She said she also reported the post to both the CDC and her police department (who reported it to the state health department). The post is still up as of publication time. Facebook did not respond to a request for comment about this post.

”If that’s something you have to do to be able to move about your life, assume the scammers are going to create a scam around it,” says Kristin Judge, of the Cybercrime Support Network, pointing to both fake Covid-19 vaccination cards and fake Covid-19 test results that have popped up amid the pandemic.

Chad Anderson, a senior researcher at the cybersecurity threat intelligence firm DomainTools, where he’s been regularly tracking vaccine-related websites throughout the pandemic, told Recode he thinks that the fake card business is only likely to bloom. He’s already seen them being advertised on everything from Shopify-supported shops to the dark web.

“You can just go to Instagram and siphon off people’s batch numbers and just put it on your own fake vaccine card,” he told Recode. “In the US today, we are relying on these cards. They’re extremely easy to fake. Anyone can print one out with the right cardstock.”

Authorities, including the CDC, told Recode they’re aware of the problem, and a spokesperson for the inspector general’s office at the Health and Human Services Department said it has received several reports of scams involving fraudulent vaccine cards. “It is unconscionable that scammers would prey on people’s fear and use the ongoing public health crisis for personal gain,” the representative told Recode.

The World Health Organization added that fake vaccine paperwork can be especially dangerous because it’s unlikely to be reported to national health authorities, and can exacerbate the spread of disease.

And these fakes aren’t just popping up on social media. On eBay, at least one seller had sold nearly 60 “4 packs” of fake Covid-19 vaccination cards (for $35 each), according to a posting on the site, which was viewed by Recode before the platform removed it. After Recode asked about them, eBay also took down another post selling fake “vaccination exemption” cards. Company spokesperson Ashley Settle said the company has been taking down vaccine card sales and is using both manual searches and technology to find the fakes when they’re posted to the site.

Google also took down ads it was running for two websites that purported to sell such cards after Recode reached out to the company. One website using these ads offered a four-pack of Covid-19 vaccine cards for $50, while another claimed to sell a “proof card” for both Covid-19 vaccinations and antibodies. “Early on we implemented our sensitive event policy for Covid-19, blocking most ads referencing the virus, to protect people from bad actors attempting to capitalize on it,” a Google spokesperson told Recode, adding that the company is adapting its approach as it continues to intercept ads for scams.

Some scammers are even calling up seniors in the US, requesting personal information in exchange for a special Covid-19 Medicare card — a card that is not a legitimate Medicare benefit — warned Jennifer Stewart, a senior director of fraud investigation at BlueCross BlueShield Massachusetts.

“You’ll get to them and they might have the seal of the state on it. They’ll have information. They try to make them look as plausible as possible, though rarely do they exactly match the legitimate site,” she adds.

The vaccine rollout varies widely depending on where you live, which can add a lot of confusion to the process and make it easier to fall victim to a scam. So as vaccinations continue in the United States, and even speed up, it’s important to keep your eyes open for potential scams and fakes, and avoid sharing personal information before double-checking the legitimacy of the website you’re on or an email you receive.

There are things to watch for that the Federal Trade Commission says should give you pause. No one should be asking you for money to get the vaccine early — or reserving a spot on a waitlist — and you should avoid any vaccine offers that ask for a credit card number, bank account information, or your Social Security number. If you’re looking for a real vaccine appointment — and to check if you’re eligible — it’s best to visit your local public health department’s website and go from there.

Bullshit jobs: why they exist and why you might have one
Kevin Hart’s Oscars controversy feeds the stereotype of the black homophobe
What it’s like to be a professional twin
“It’s kinda like a first date”: How to make the most of starting a new job remotely
HBO’s Random Acts of Flyness is starting to fulfill its enormous potential
How Silicon Valley’s secretive donor group plans to beat Trump