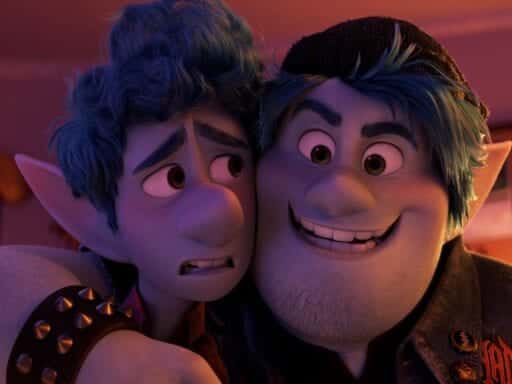 Structured like a Dungeons & Dragons-style fantasy quest, Onward is gentle, charming, and lovable.

Onward, Pixar’s latest adventure, takes place in a world that was once enchanted, full of magic you could use to start a fire for some goblins or spark fireworks for a celebration. But the magic wasn’t easy to master, and so “the world found a simpler way to get by.”

That simpler way was science — you don’t need to learn spells and harness magic to turn on the lights if you can just flip a switch. Anyone can do it. So over time, as the narration at the beginning of the film explains, magic faded away.

Yet the world of the movie, as we find it at the start of Onward, is still plenty magical compared to ours, populated by creatures like elves and centaurs and cyclopes. Written and directed by Monsters University’s Dan Scanlon, the film is gentle and fun. It’s not top-tier Pixar; it’s been a long time since the studio, which is owned by Disney, has turned out a truly innovative film, and even 2017’s Coco, which broke ground in terms of onscreen representation, hit very familiar story beats.

But it’s better than most of the entertainment aimed at children that studios churn out these days. There aren’t any annoying nonsense characters (like in the unending Minions saga or, god help us, The Emoji Movie), and there is an actual story (in contrast, say, to the bizarrely disconnected Secret Life of Pets 2). It’s not pitched at a frantic pace, or loud and grating, or reliant on musical numbers that will eventually drive loving parents out of their ever-loving minds. It’s just a movie that has a big organizing concept — and it’s also got a heart.

Onward’s plot cleverly employs the structure of the sort of campaign you might play in a fantasy role-playing game such as Dungeons & Dragons, with heroes, a quest, a number of obstacles and monsters, puzzles, spells, and some surprises thrown in here and there. That it’s set in a world that once was ruled by magic — and in which a character’s love of role-playing games is a key plot point — is fun for both kids and non-RPG-playing audience members, and a bit of an Easter egg for any adults who look fondly on their D&D-playing days. (Which might have been as recent as last weekend.)

But in Onward, the fantastical, Tolkien-lite elements are mixed with more banal workaday realities. So it’s a lot like our world. Unicorns paw through the trash cans; small domesticated house dragons are kept as pets and sleep in kennels. Everyone drives cars and uses cellphones. Kids learn normal things at school, like math and science and history. Nobody’s using magic to get through the day.

The world that Onward sets up is explicitly “disenchanted,” a concept that some philosophers (notably Charles Taylor) have identified as a characteristic of our own unicorn-free world. (Others have argued about it, of course.) Those thinkers aren’t theorizing that magic once existed, exactly, but rather that at a past point in human history, people routinely believed that it existed, and that colored how they saw the world. Problems with the weather or with fertility or relationships or many other things were indications that you needed to petition a deity or a supernatural being, or practice a spell, or something like that.

But — to oversimplify a tad — when modern science came along, it made the world seem like a place that could be studied, understood, and explained. Thus the feeling of enchantment evaporated. And that seems to have happened in the world of Onward, too. Life is predictable, explicable, normal.

That’s the life the Lightfoot family lives, in a comfortable suburban home. They’re elves: Laurel (Julia Louis-Dreyfus) and her two sons, nerdy teenager Ian (Tom Holland) and goofy older brother Barley (an excellent Chris Pratt), who is mostly interested in his favorite RPG, called Quest of Yore. (It’s a stand-in for Dungeons & Dragons, except in the world of Onward, dragons and wizards once were real, so when his mother gently prods him to stop playing games, Barley protests that it’s “historical.”) Ian and Barley’s beloved father died long before Ian could remember him, and they’ve grown up wishing he could be around, though life with their mother is good.

But a surprise left by their father to be opened on Ian’s 16th birthday launches the brothers on a quest, with the promise of the boys getting to spend a few precious hours with him, via a magical spell. Their journey is littered with dangers and roadblocks both magical and pedestrian, from enchanted puzzles to traffic stops. At one point they arrive at a mysterious pub ruled by a manticore (Octavia Spencer), only to find out it’s become a family eatery, more or less an Applebee’s, and the winged-lion proprietor must be reminded that she has powers that go beyond delivering burgers to diners’ tables.

Onward is familiar in many ways, but it succeeds in reenchanting the world for its audience

The point of this quest, of course, isn’t really to find what they’re looking for. It’s to let Ian realize things about his own powers and learn boldness, and for him and Barley to strengthen their bonds as brothers while traveling through frightening distant lands. This is not exactly shocking territory for a Disney movie. (Frozen 2 is still in theaters, after all.)

But one more added layer — the brothers’ yearning to see their father just for a little while, and the basic impossibility of recovering the past, even through magic — brings a kind of magic. One of Pixar’s most profound strengths has always been confronting the bittersweet along with the purely sweet and funny, in stories that kids and parents can watch together. The studio has been especially good at dealing with loss and even death, in movies ranging from Inside Out to Up to the Toy Story series, and Onward pulls at those same heartstrings.

Which is a bit of enchantment all on its own. Death is natural, and loss comes to us all. We know that, and we can explain it, and the older we get, the more we accept that it’s just a fact of life. But a movie like Onward gives us a moment to pause, to sit with our feelings, and then to feel some hope for the future. It may not be as revolutionary as some of Pixar’s past offerings — and in that sense, it offers a glimpse of the studio’s likely future — but it still retains a spark of that old-time magic.

Onward opens in theaters on March 6.

Elected US Congress member Luke Letlow has died of Covid-19
I was sexually abused as a Boy Scout. Thousands like me deserve a reckoning.
How to watch Trump and Biden’s dueling town halls on Thursday
How to help a friend through a tough time, according to a clinical psychologist
Vox Sentences: Don’t call it NAFTA
WandaVision is at its best when it gets weird