The best $20 I ever spent: My first tote bag 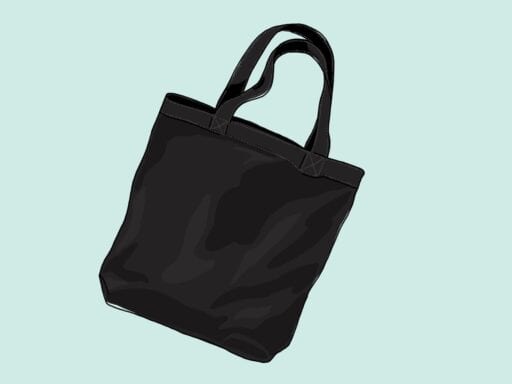 As a guy, I hadn’t given much thought to what I did (and didn’t) carry around with me, until my partner opened my eyes.

On one of the last nights of summer last year, my partner asked if she could read me an essay by Lisa Miller titled “Men Know It’s Better to Carry Nothing.”

“Yeah, definitely,” I said, and she started to read a meditation centered on the meaning behind why women carry purses, while men, notably, do not. How women fill and carry their bags to respond to all the tiny, unremarkable crises that may call for an umbrella, a tampon, a condom, a Band-Aid, while men enjoy the freedom from being expected to carry anything or respond to messes.

My partner read with equal parts delight (“men are walking around empty-handed, uncompelled to be useful”), disappointment (“as humans who menstruate, we simply learn early to be ever vigilant against accidents”), and disdain (“A woman’s responsibility for everyone else’s spills extends to the most primal level”).

I felt a dazzling wave of guilt as she read. It was clear that she wasn’t reading this to me because the angle was compelling and the language hypnotic, but because Miller had put words to an inequity my partner felt in our relationship. Soon, we were openly talking about how I almost never helped when something spilled in public, or took it on myself to be the one to sneak weed into concert venues. I acknowledged the unfairness in both the essay and our relationship, and we moved onto something else.

Still, I thought about the conversation a lot in the following weeks. So when the company I work for started selling branded tote bags, I figured I’d buy one for $20. The design was cool and I felt as though I would show my employers some sort of support, but also I figured this would be a chance to address the inequity (and guilt) I’d been aware of since that late-night reading.

I realize just how much of a cliché that is: girlfriend reads her boyfriend an article, he feels guilty enough to half-heartedly make an empty gesture. There’s an episode of That ‘70s Show where Jackie makes Kelso read an article from Cosmopolitan magazine. Jackie reads “This article says that cheating is a symptom of a deeper problem,” and Kelso bemoans “Deeper problem? No, I don’t want a deeper problem. I want a quick fix!” I remember being 14 and thinking that was funny even though I had never had a romantic relationship, nor would I for many years, so I’m not really sure why. I think the laugh track helped.

Now as a man in his 30s and in a serious relationship, I understood that just buying the tote bag was my version of a “quick fix,” and that it would be an empty gesture if I didn’t consider the deeper problem — the person I loved was telling me something was unfair. There’s nothing really funny about that, and there are no laugh tracks in real life.

I decided that I would be earnest about filling the tote with the stuff I needed and always having it with me. After I took it home, filled it with items I thought might be helpful at any given moment, and left my apartment with my tote slung over my arm for the first time, I felt the immediate benefits: undeniable improvements to my day-to-day wellbeing and a newfound sense of self-reliance.

As any longtime carrier of bags, purses, or packs can tell you, there is both an art and a strategy to what you decide to put in your bag — there is only so much room in the tote, after all. What do I need? pushes up against What do I want? Decisions, whether you want to make them or not, must be made.

I decided my tote would contain a mixture of the required and desired. At any given moment, the tote contains a reusable water bottle, my pocket items (wallet, phone, keys), some pens, a notepad, knockoff Apple earbuds, a glasses case, a pack of gum, tissues, some weed and a vaporizer, an old checkbook, a magazine, and a book.

Now, I can sneak in a few pages of reading while waiting for coffee or on work breaks. I really no longer have an excuse for dehydration or smudged glasses. When my partner and I are at dinner trying to figure out our favorite movies of the last decade, we can jot down our long list on a notepad and whittle the list down from there.

These are the minor messes we encounter every day — difficulty finding reading time, being thirsty, having blurred vision, being without a pen and paper to make a list — that I wasn’t able to even recognize as messes until I had the tools to clean them.

Something I often think about is how solvable these situations are, how very little effort they actually require, and I can’t help but feel a sort of embarrassment worm its way into my brain: If all these situations were so easily solved, why did I take so long to solve them?

Perhaps the answer lies within what I found to be a surprisingly common occurrence: male friends or colleagues seeing the tote and dubbing it a “man purse.” The tone doesn’t outright indicate maliciousness, but the choice of words always reveals the judgment — “You know bags are for women, right?”

Men, culturally, have had a hypersensitive, almost fearful relationship with the idea of a man having a bag. I’ve noticed that unless it acts as a status symbol of ridiculous wealth or superior taste, a man using a bag to hold practical items to get through his day is considered distastefully feminine. And yet, I’ve also noticed that the more masculine route of carrying … well, nothing … can lead to men resorting to wiping their noses on their sleeves and their hands on their pants, or having terrible breath from drinking coffee or smoking a cigarette. These small details usually get me thinking about whether men don’t have these items because they can get away with these things, or is it because they can get away with these things that they don’t have these items?

It didn’t take too long for me to make the rookie mistake of bringing too many things with me, making the bag heavy and awkward to carry and nearly impossible to find anything in. Even now, I grapple with some of the decisions. The book I’m reading is brilliant, but it’s still in hardcover. It will often sit in the middle of the bag, acting as a kind of wall separating my keys from my wallet and glasses case. When I have two sets of knockoff Apple earbuds tangled in the mix, I usually have to dump everything out just to pay for coffee.

It’s made me realize I can only comfortably carry so much before I have to make decisions for myself. It’s a fine balance of how useful I want to be to others and how nimble I need to stay for myself, one that I’m constantly considering. But the tiny, unremarkable crises and deeper problems are now considered in a way they weren’t before, and while I’m still figuring out how to continually address as many as I comfortably can, I’m finding life’s minor messes are more manageable when I have my tote bag with me.

Nic Juarez is a writer and editor living in Long Beach, California.