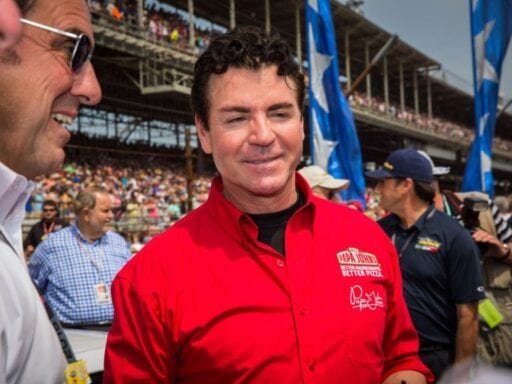 He was undergoing an exercise on how to handle controversial situations when he made the comment.

Papa John’s founder John Schnatter is facing fallout after he admitted that he used a racial slur on a conference call that was set up to teach Schnatter how to not say offensive things.

Forbes first reported Wednesday that Schnatter had used the n-word and described a scene of violence against African Americans on a corporate conference call in May. The call was set up to help take Schnatter through a “role-playing exercise” to help him deal with racially sensitive situations. Schantter stepped down as CEO from Papa John’s last year, after he blamed NFL leadership for failing to stop NFL protests.

On the May call, Schnatter was asked how he would distance himself from racist groups online. He responded by downplaying the significance of his NFL statement. “Colonel Sanders called blacks n—–s,” Schnatter said, before complaining that Sanders never faced public backlash.

Schnatter also reflected on his early life in Indiana, where, he said, people used to drag African-Americans from trucks until they died. He apparently intended for the remarks to convey his antipathy to racism, but multiple individuals on the call found them to be offensive, a source familiar with the matter said.

Schnatter confirmed to Forbes that he made those comments and apologized. “News reports attributing the use of inappropriate and hurtful language to me during a media training session regarding race are true,” he said in a statement. “Regardless of the context, I apologize. Simply stated, racism has no place in our society.”

Schnatter remained as chair of Papa John’s board after the NFL incident, and according to Forbes, the founder who notoriously featured himself in lots of commercials, wanted to stage a comeback. The NFL replaced Papa John’s with Pizza Hut as the official pizza of the league, and Papa John’s had been dealing with slowing sales. The conference call was an attempt to avoid future PR disasters — and ended up seriously backfiring.

ALERT: Just announced by @uofl @IAmPapaJohn has resigned from the University of Louisville Board of Trustees. Please see below: pic.twitter.com/KtC5zoR3ao

Schnatter has deep ties to Louisville. He was appointed to the Board of Trustees by Gov. Matt Bevin (R-KY), but has long been a fixture at, and financial backer or, the university. The football stadium bears the name of the company he founded — Papa John’s Cardinal Stadium — and he donated millions to found an eponymous Center for Free Enterprise at Louisville. The pizza company founder was also a fixture at sports games.

Another city also responded: The mayor of Jeffersonville, Indiana — Schnatter’s hometown — ordered his name removed from its local field house on Wednesday. Schnatter had donated hundreds of thousands of dollars to renovate the aging facility last year.

ALERT: @CityofJeff Mayor Mike Moore (not him but a city worker) has removed the name of the @IAmPapaJohn from the Nachand Fieldhouse in Jeffersonville, Indiana. This is from @wave3news Photojournalist Miles Jackson. pic.twitter.com/pVhso1gSyI

Schnatter has faced controversy even before his NFL remarks last year. The Papa John’s founder got slammed in 2012 for saying that the cost of insuring his employees under the Affordable Care Act would raise the cost of pizza.