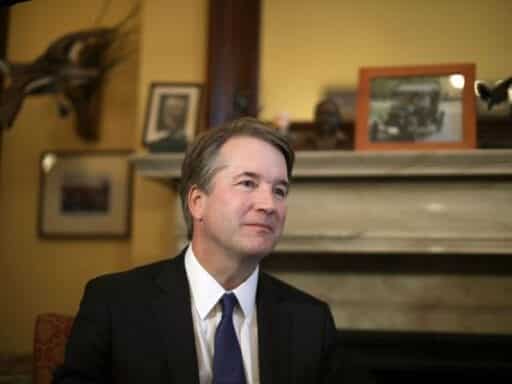 The White House says his friends paid him back and he stopped buying tickets.

Brett Kavanaugh, President Donald Trump’s nominee to the Supreme Court, wracked up tens of thousands of dollars in credit card debt — some of it from allegedly splurging on Nationals tickets.

The Washington Post’s Amy Brittain reviewed Kavanaugh’s financial disclosure forms and spoke to the White House about some startling details that appeared in the filings. According to the Washington Post:

In 2017, however, the Post says that the debt and loan were either “paid off or fell below the reporting requirements.” White House spokesperson Raj Shah told the Post that Kavanaugh’s friends reimbursed him for the tickets and that the judge stopped buying season tickets.

Kavanaugh’s love of baseball isn’t at issue here. As the New Yorker’s Eric Lach pointed out on Twitter, it’s really what’s not on the filings that raises potential red flags: exactly how, or why, that debt got paid off in 2017.

Like, shouldn’t the headline be “SCOTUS Nominee Mysteriously Had As Much As $200,000 In Debt Wiped Out Last Year”?

Kavanaugh’s filings revealed assets between $15,000 and $65,000, although the value of his Maryland home (worth $1.2 million in 2006) and another half-million dollar retirement account weren’t required to be listed on the forms, according to the White House.

Kavanaugh’s debt — or the general state of his finances — isn’t automatically disqualifying when it comes to his potential confirmation to the Supreme Court. The financial disclosures are intended to reveal any potential conflicts of interest. They offer a broad and incomplete picture of Kavanaugh’s financial situation.

But the Post’s analysis suggests that this may be another source of questioning as Kavanaugh gets set for what could be a grueling confirmation process. This also wouldn’t be the first of Trump’s nominees (or Trump himself) to face scrutiny over financial disclosure forms — it seems to be somewhat of a running theme of the administration.

Kavanaugh, of course, is in a different position, with a lifetime appointment to America’s highest court. Democrats are currently fighting Kavanaugh’s nomination over health care and women’s reproductive rights. Some have raised concerns about his past work for Ken Starr on the Clinton investigation and his abrupt change of heart about presidential investigations. Add some — albeit unexpected — queries about baseball tickets to the list.

Why is SMS texting a mess? Fixing it is harder than you think.
Here are the few Republicans who have called for Trump’s removal
A Baltimore police officer brutally beat a black man. It’s creating new problems for the department....
Kentucky AG releases Breonna Taylor grand jury audio recordings
The EU can now punish human rights violators all over the world
The Handmaid’s Tale gives Elisabeth Moss a dynamite showcase in “Holly”