Plane ticket prices are dropping because of the coronavirus 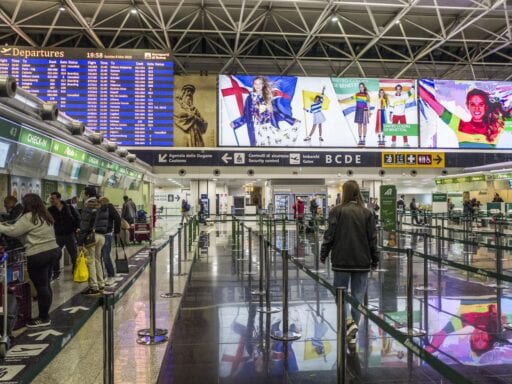 The CDC says Americans should avoid nonessential travel, especially long plane trips, and crowded spaces, which is basically the definition of all airports.

As more and more people grow hesitant to travel by plane because of concerns about the coronavirus, domestic and international fares have plummeted. Expedia is marketing a New York to Los Angeles round-trip flight for $142, which costs, on average, about $300 one-way. A Miami to Chicago flight is usually about $193, but Frontier Airlines is advertising a $67 round-trip ticket. Prices for international flights are also shockingly low: A round-trip fare from Boston to Barcelona is $196, compared to an average of $681.

It might seem tempting to snatch up these deals, if not for the Centers for Disease Control and Prevention’s warning to avoid nonessential travel, especially long plane trips, and crowded spaces, which is pretty much the definition of every airport. These precautions are extremely important to heed, especially for older and sick people as the outbreak continues, and the CDC has travel alerts for South Korea, China, Italy, Iran, and Japan — places Americans are advised to avoid.

So why the bargain-basement prices? Travelers are postponing if not outright canceling plans, meaning airlines have to scramble to fill those seats. According to Austin Horowitz, senior aviation management consultant at the global consulting firm ICF, cheap airfare is a result of multiple factors, namely the drop in flight demand. “It’s almost a negative price that airlines will have to pay to get people to fly,” he told me. “But there are some takers, and right now, they’ll have to keep prices down until people start traveling again.”

Most US airlines are offering travelers who’ve booked within the past month the opportunity to change or cancel flights without fees, something that has angered customers who scheduled their trips months ahead of time. Airlines aren’t likely to promote discounts during a disease outbreak, Horowitz said, so offering cancellation and change fees is another way to incentivize people to purchase a plane ticket.

Since people are flying less, airlines need to keep operating so they don’t lose even more revenue or coveted airport slots for future flights. There are certain costs that come with operating an airline, such as aircraft insurance, fuel, and labor, that a carrier has already paid for. “From that perspective, as long as you can cover these costs, you might as well fly because you end up bringing in more cash than you would not operating,” Horowitz added.

In Europe, airlines are flying empty “ghost” flights to avoid losing their airport landing slots, the British newspaper the Times reported. In more than 200 airports worldwide, airlines operate under a slot system with assigned take-off and landing times, which ideally prevents airport overcrowding by creating an organized system for planes to arrive and depart. For example, Reagan National Airport in Washington, DC, is limited to 60 slots (arrivals and departures) an hour.

European carriers and ports abide by the “use it or lose it” slot policy, which means an airline is required to fly at least 80 percent of its slots or risk having that time reallocated to a competitor. Grant Shapps, the UK secretary of state for transport, called for British slot regulators to reconsider this rule last week, as did the International Air Transport Association, but no changes have been made.

People are motivated to travel or stay at home based on a variety of perceived risks. “This risk-averse nature is not unusual during times of crisis,” Rian Mehta, an assistant professor of aviation at the Florida Institute of Technology, told me. The lack of control and knowledge of the virus’s spread is a “psychological driving factor” that might lead people to cancel plans, he added. “Every new piece of negative news has the ability to negatively impact perceptions,” Mehta said, but if there’s positive news of the outbreak’s containment, he predicts that people will start traveling again.

Horowitz said the “recovery time” for travelers to feel comfortable flying again is dependent on the “period of disruption.” In the case of the 2003 SARS crisis, which lasted about six months, it took a few months for travel to pick back up to the level it was before the outbreak, he told me.

On social media, some people are openly weighing the risks and benefits of traveling while others are stocking up on household goods. “Flights are so cheap rn I might risk coronavirus,” one Bachelor contestant recently tweeted. “WE’RE HERE FOR A GOOD TIME NOT A LONG TIME,” wrote another.

The media: “CORONAVIRUS PANDEMIC IS GETTING WORSE EVERYONE PLS WASH UR HANDS AND QUARANTINE URSELVES DON’T MOVE WE’RE GETTING CLOSER TO THE END“

Millennials on our way to the airport cuz flight prices dropped: pic.twitter.com/WKtfnWEwJW

As Vox’s Brian Resnick reported, health experts have said that containment in the US so far isn’t working. People can ideally help slow the spread of the virus by taking measures like staying home, washing hands, and avoiding large crowds of people, but Resnick wrote that “the outbreak might be further along — and therefore harder to contain — than authorities currently realize.”

That means there’s a lot of uncertainty as to where and how aggressively the virus might spread next, and it seems like many travelers aren’t willing to take the risk of boarding a plane. So long as the outbreak continues, aviation experts predict that airfare will probably stay low — at least for a few weeks after the disease’s eventual containment.