Poll: Americans are really worried about making sure $1,400 checks go to the “right” people 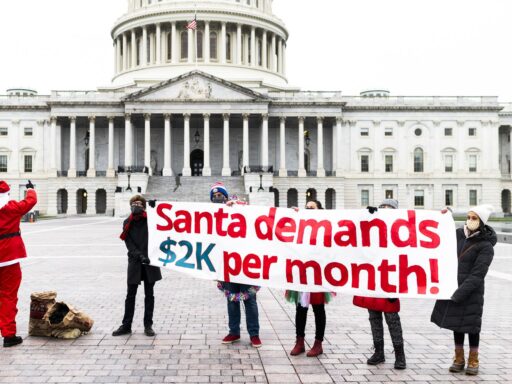 Are voters willing to sacrifice lives and financial stability to keep Covid-19 stimulus checks out of the “wrong” hands?

Amid one of the worst health and economic crises the US has seen in decades, Americans are as concerned about making sure aid goes to the “right people” as they are about getting aid out at all.

A new poll of 1,164 likely voters conducted January 15 to 19 by Vox and Data for Progress (DFP) reveals an oft-ignored truth: Sometimes the reason optimal policy doesn’t happen isn’t because of bad politicians; it’s because voters don’t want it to pass.

In the poll, 60 percent of likely voters said they would support sending a $1,400 one-time payment to most Americans as part of Covid-19 relief. That’s great news — the $1,200 stimulus checks last year were shown to have reduced poverty and helped Americans stay afloat in the first months of the crisis.

But that same number (60 percent) support means-testing the aid, agreeing with the statement: “Checks should be phased out based on income so higher income people receive less money.” The poll, which has a margin of error of 2.9 percentage points, also found that nearly as many likely voters (56 percent) are opposed to sending stimulus checks to undocumented people.

Voters may not fully understand the trade-offs to means-testing and restricting aid to undocumented Americans (namely, that many people experiencing financial difficulties may be left out due to poor targeting). But the stance is consistent with another DFP finding, which Matt Yglesias wrote about for his newsletter Slow Boring, revealing that voters would rather some vaccine doses expire than allow “some people to cut in line.” In essence, that means most voters would rather have more people get Covid-19 and potentially die than have someone get a vaccine dose before they “should.”

Opposition to the wealthy receiving financial assistance from the government and hostility to undocumented immigrants isn’t surprising, but these findings showcase something very important: Voters are so concerned about the perceived “fairness” of the economic response that it could hamstring optimal policymaking.

What could this commitment to “fairness” have cost us? A lot.

The cost of “fairness” in a crisis

Last March, Vox’s Dylan Matthews wrote about why Congress should not means-test its aid:

Do not try to means-test or prevent payments from going to rich people; if we’re worried money going to people who don’t need it, just tax the rich later when we’ve survived the outbreak. If you must means-test, this plan endorsed by Reps. Tim Ryan and Ro Khanna strikes a good balance.

The argument is simple: America is in a crisis, and it’s a trade-off between speed and accuracy. Yes, some people who get the money may save it, they may not be financially harmed by the pandemic, and it may feel unfair, but it’s better that everyone struggling gets the money as quickly as possible than we slow down the process over a flawed conception of justice.

Nearly a year has passed, but the crisis is still horrific and still progressing rapidly. The US exceeded 400,000 deaths this month, and as Vox’s Emily Stewart reported, “The week before [President Joe] Biden took office, 1.4 million Americans filed for unemployment.” Biden has proposed a $1.9 trillion Covid-19 relief package to respond to the continuing economic toll.

Proponents of means-testing may point to recent data that stimulus checks to Americans earning over $75,000 don’t benefit the economy — in essence arguing it’s a waste of government spending. However, as Matthews pointed out, the simple fix to this would be to just tax rich people more later to recoup the costs instead of wasting time during a pandemic trying to design the optimal program. Additionally, we only have this data in hindsight — at the time, it wasn’t obvious where the dividing line between “affected by the pandemic” and “unaffected” was.

What happened with $600 stimulus?
Households under ~$50k mostly spent it ASAP
Households over ~$75k mostly save ithttps://t.co/48Q1mUgrHS data via @OppInsights pic.twitter.com/tO2hiJA95E

Further, there’s a real cost to trying to be fair in this way. Take the US-born or naturalized citizens who share a household with immigrant family members who aren’t citizens. Though they themselves would have qualified for aid, because of the way the CARES Act was written, they were excluded because they lived in a mixed-status household. As Vox’s Nicole Narea reported in May, that meant “an estimated 16.7 million people who live in mixed-status households nationwide, including 8.2 million US-born or naturalized citizens,” were at risk of not receiving their stimulus aid.

In the second stimulus package passed at the end of 2020, Congress attempted to rectify this by allowing “mixed-status households with undocumented family members to receive stimulus checks that they were denied … in the spring,” reported CBS News. It also made the CARES Act stimulus retroactive, but there could be millions of families for whom it’s too late. (Biden’s $1.9 trillion proposal also seeks to ensure mixed-status households receive aid, though he has not proposed allowing undocumented immigrants to receive the benefit.)

To some, it seems individually rational for a documented American earning under $75,000 to be in favor of means-testing and excluding the undocumented during a crisis. From a humanitarian perspective, undocumented immigrants, who have been disproportionately affected by the crisis and make up a large portion of the country’s essential workers, deserve aid. But from a purely self-interested perspective, it makes sense for other Americans to support direct aid as well: Financial instability among groups living on the margins of society has ramifications for everyone — recent studies have shown that evictions and homelessness increase the rate of infection for the community, not just for the individuals in crisis.

One silver lining in the poll is the finding that 51 percent of Americans are in favor of automatic stabilizers that “automatically trigger more spending on programs like unemployment insurance or SNAP if the economy experiences a contraction.” It’s something Biden has signaled his support for and could help the nation avoid wasting precious time the next time there’s a recession.

How the Pittsburgh shooting changed American Jews
University of North Carolina at Charlotte shooting: what we know
Remote voting is likely coming to the House of Representatives
Rent the Runway customers are reporting horror stories of canceled dress deliveries and customer ser...
Netflix’s Death to 2020 rehashes jokes we all spent the last 12 months making
Photos: what Hurricane Michael’s destruction looks like on the ground