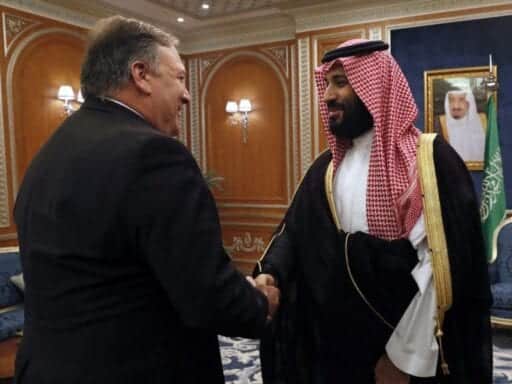 What a horrible, no good, very bad photo op.

Secretary of State Mike Pompeo just took some smiling photos with Saudi Crown Prince Mohammed bin Salman — the person who reportedly ordered an operation that may have led to a prominent journalist’s death.

Pompeo is in Riyadh to meet with Saudi leadership and to discuss the fate of Jamal Khashoggi, a US resident and well-known Saudi journalist, who disappeared after visiting the Saudi Consulate in Istanbul on October 2.

According to multiple outlets, Riyadh may soon admit that it killed Khashoggi during an interrogation gone wrong.

The US secretary of state met with King Salman, the country’s leader, on Tuesday. But he also met with the crown prince, known as MBS, who is the de facto ruler of the country and would certainly know if Saudi Arabia played a role in Khashoggi’s disappearance.

But considering the information that has emerged about MBS — like US intelligence reports that say he ordered an operation to capture the dissident and bring him back to the country — Pompeo’s decision to appear next to him in photos, smiling and looking happy, is questionable at best.

It’s terrible optics for the secretary of state to be seen with the person America’s spies say may be most responsible for Khashoggi’s disappearance — and it’s quite the public relations win for Saudi Arabia.

As much of the world, including US lawmakers and top members of America’s business community, condemns Riyadh for its alleged actions, President Donald Trump’s chief diplomat is jovially hanging out with the likeliest culprit.

And while it’s not odd for a US administration to cozy up to authoritarian rulers, especially Saudi ones, it’s quite jarring to see a US Cabinet member warmly palling around with MBS in the midst of such a huge scandal.

According to a State Department readout of Pompeo’s MBS meeting, “The Secretary reiterated the President’s concern with respect to Jamal Khashoggi’s disappearance, as well as the President’s desire to determine what happened.”

The State Department declined to comment on why Pompeo felt it was appropriate to meet with MBS.

Why Pompeo did this

One State Department official familiar with the matter told me that Pompeo is in Riyadh for one reason: to deliver Trump’s message that the US doesn’t really want to punish the kingdom for the Khashoggi incident.

“Pompeo focuses on what the president wants,” the official told me on the condition of anonymity to discuss sensitive talks, “and they seem to want a way to climb down” from punishing the country.

“It’s a terrible signal to send, but they seem intent on plowing ahead,” the official continued.

That tracks with Trump’s latest comments on how he plans to respond to Khashoggi’s disappearance.

“There’s a lot at stake. And maybe especially so because this man was a reporter,” Trump told CBS’s 60 Minutes on Sunday. “There’s something really terrible and disgusting about that, if that were the case. So we’re gonna have to see. We’re going to get to the bottom of it, and there will be severe punishment.”

But Trump has also repeatedly said he doesn’t want to take any actions that could imperil a litany of arms sales to Riyadh, totaling $110 billion. What’s more, he’s implied he doesn’t want to put the weapons deal on the line because Khashoggi was only a US resident, not a citizen.

And on Monday, he said that perhaps “rogue killers” were at fault — not the Saudi regime.

In other words, Pompeo’s smile seems like a metaphor for Trump’s Saudi policy: The US will maintain its friendly stance toward Saudi Arabia — no matter what.

Amazon now has more than 150 million Prime members across the world
Who is winning the Super Tuesday delegate count so far
Terrazzo used to be kitschy. Now it’s on everything from Spalding basketballs to Madewell dresses.
Do “untranslatable words” really exist?
Could this be Trump’s orange makeup?
Facebook is the latest major tech company to let people work from home forever

Days before the election, the Senate will take time to grill Big Tech CEOs — again

The misunderstood Rust Belt worker vote, and its importance in 2020, explained