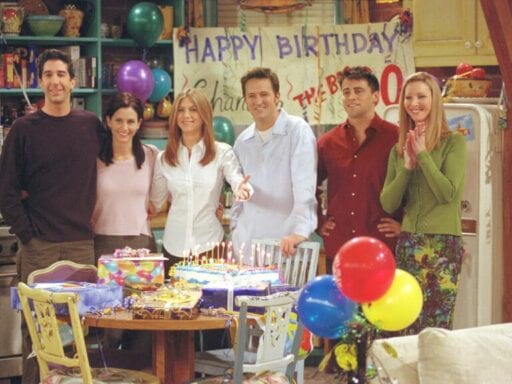 It raises some new (and old) questions about what “product placement” actually means.

Back in 2000, Friends made Pottery Barn’s apothecary table — a dark wood storage bench with a bunch of brass-knobbed drawers — famous when it cast it as the centerpiece of the aptly named episode “The One With the Apothecary Table.” This month, Pottery Barn will rerelease the piece in collaboration with Warner Bros. to commemorate the 25th anniversary of the sitcom’s premiere.

“[W]e brought back the beloved Apothecary Table (from the days of yore),” reads a temporary landing page for the new collection launching online July 30. It’s already on sale in the current Pottery Barn catalog for $1,099. (The apothecary table in the episode set Rachel back $500.) “Could we BE any more excited?” reads the catalog copy in Chandler Bing cadence.

“We are thrilled to partner with Warner Bros. to bring an inspired collection to life for FRIENDS fans,” a Pottery Barn spokesperson told Vox in an emailed joint statement with Warner Bros. “The iconic Apothecary Coffee Table is just one of the items featured in this special collection.” The other pieces remain under embargo until the end of the month but appear to include a tasseled pillow embroidered with “Welcome Friends” in the series’ recognizable font for $49.50, and Central Perk mugs for $14.50 apiece.

The rerelease revives an old conversation on what’s generally thought of as product placement in film and TV (although “product placement” suggests that money has changed hands, which isn’t always the case — more on that later). It also raises a new question: Is there such a thing as retrofitted product placement?

Five of the six core friends on Friends utter the words “Pottery Barn” a total of 18 times in the apothecary table episode. “You got it from Pottery Barn?” Monica asks, aghast, as Rachel pores over the pages of a mailer from the store. “Yeah! It’s an apothecary table,” says Rachel. But Monica knows something that Rachel does not: Phoebe refuses to shop at the store that Rachel adores.

The apothecary table isn’t the only one of Pottery Barn’s 2000-era products to appear onscreen: There’s something called an “ornamental birdcage,” and the “Sahara desk,” and the “Parker console table.” Says Ross, “Your place looks like page 72 of the catalog.” Later, Rachel and Phoebe stop in front of a store window, Pottery Barn’s logo affixed to the glass, before heading inside to buy a Pottery Barn lamp.

Scholars cite this episode as a hallmark template for product placement in entertainment. “This well-integrated reference to a brand is a prime example of the proliferation of product placement, the practice of placing branded products in the content of mass media programming,” writes Cristel Russell, a marketing professor at American University specializing in product placement, for the Journal of Consumer Research in 2002, adding that marketing resources in 2000 estimated that advertisers paid Hollywood studios $360 million a year to showcase their stuff.

But Pottery Barn has maintained that no money exchanged hands. The home goods retailer told BuzzFeed last year that Pottery Barn did not pay for its product to appear in the episode: “The table was donated and we continue to be grateful for inclusion in this episode.”

Production designer Greg Grande, who worked as the set decorator on Friends for the entire 10-year run of the series, backs that up. He regularly received product offers from companies, “with the right to use it for free and not ‘greek’ out the name,” he says, referring to the art design practice of replacing text with nonsense words. In the show’s heyday, he tells Vox, it was common practice for brands to donate props and set decoration to Friends, ostensibly in exchange for visibility of their brands.

“Name recognition today is different from back then,” says Grande, a veteran of the entertainment industry for the past three decades. “Name recognition back then would most likely just be the product use for free. Today it is negotiated with a fee.”

Most often, he received donated food, beverages, wine, and “stereo-type” stuff. “Furniture pieces didn’t really have the same recognition value as products on a shelf,” he adds. “In this case, the apothecary table was definitely a ‘thing,’” since Pottery Barn was so popular with Friends’ target audience already. Once producers ironed out the arrangement, Pottery Barn gave Grande “carte blanche” to shop its store at the Beverly Center in Los Angeles, “and outfit Phoebe’s apartment however I chose to.”

The apothecary table started not as a prop to be worked into the script, says Grande, but on the page as a “story point.” The original outline and story he received featured the apothecary table prominently, and it was then the task of Grande and his team to source the right product. Says John Shaffner, the episode’s production designer, “I do remember the table and some discussion about it as being the exact thing we needed.”

Patrick Connolly, then executive VP and CMO of Pottery Barn’s parent company Williams-Sonoma Inc., told attendees of the 2004 Catalog Conference that syndication of the apothecary table episode is “the gift that keeps on giving. The phones light up with catalog requests every time it airs.” And the 2002 book Big Media, Big Money: Cultural Texts and Political Economics cites that Peter Roth, then president of Warner Bros. Television, said the deal helped “offset the high cost of production.”

As Kaitlyn Tiffany writes for Vox, brands are increasingly tying products to popular properties and marketing against their premieres. The third season of Stranger Things is a recent example. Plenty of 1980s-era products, like New Coke, appear in the show — and could appear to be product placement. But as Netflix told Vox, “None of the brands and products that appear in Stranger Things 3 were paid for or placed by third parties. They’re all part of the Duffer Brothers’ storytelling, which references 1980s consumer and popular culture.” The payment, in effect, is brand awareness. You watch Eleven eat an Eggo waffle on Stranger Things. Later, you might pick up a box of Eggo waffles at the store.

Eggos and New Coke help tell the story of the time, too — they’re narrative tools just as much as they are advertising tools. In the case of Friends, Rachel and Ross’s spend-a-thons at Pottery Barn tells the story of Pottery Barn’s ubiquity in the early 2000s. Entertainment Weekly’s review lauded “the mockery of omnipresent Pottery Barn, which almost makes its mailbox-clogging catalogs seem worthwhile.”

What remains unique about Friends and “The One With the Apothecary Table” is that the episode’s references to Pottery Barn are not always positive. Phoebe hates Pottery Barn — hates it! — because “she hates all mass-produced stuff.” She wants her furniture to “have a history, a story behind it.”

Pottery Barn’s $1,099 Friends Apothecary Table, does, in a way, have a history and a story: It starred on Friends.

Nancy Pelosi is elected to a fourth term as House Speaker
Donald Trump, Vladimir Putin, and America’s “geopolitical suicide”
Money Talks: They’ve been together for 15 years and are never getting married. It makes money compli...
Tolkien wrote Lord of the Rings to procrastinate on the academic work he was supposed to be doing
Boris Johnson out of the ICU, Yemen reports first Covid-19 case: Friday’s coronavirus news
The GOP plan to get Americans off food stamps puts 4 million children and seniors at risk