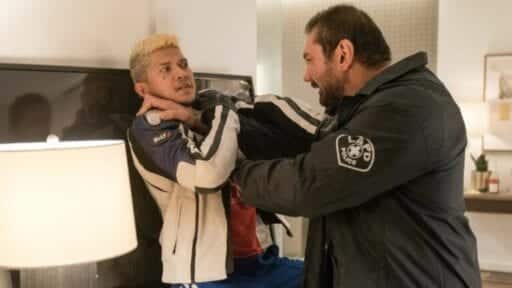 Stuber, starring Dave Bautista and Kumail Nanjiani — who is the movie’s bright spot, such as it is — is about a guy named Stu, who drives an Uber. That’s the joke!

Sigh. Stuber is part of a breed of summer movies that I think of as “aggressively fine”: They’re not unwatchable, and you’ll laugh sometimes, but they’re also not very good, and there’s no particular reason they couldn’t be. That’s what Stuber is. It’s a movie about masculinity and being a man. It’s a movie about two dudes who are opposites in many ways, cruising around in a rideshare car and becoming friends while fighting both each other and crime. It is, in essence, a buddy comedy.

Or is it? Watching Stuber, directed by Michael Dowse (What If, Take Me Home Tonight), I started to wonder if the movie is really aware of its true colors. Yes, Nanjiani and Bautista are an odd couple; yes, they are in a car chasing some criminals. Sure, that seems like a buddy comedy.

But in fact, Stuber’s trappings belie the twisted heart that beats beneath. A better way to watch Stuber — one that makes it almost kind of good — is to think of it as a dystopian nightmare dressed up as an action comedy. A strangely funny Black Mirror episode, if you will. Stuber reminds us of the special horror of trying to paste together a life in the world we live in today. Watch it, if you dare.

In fairness, the titular joke is supposed to be bad. “Stuber” is a nickname coined by the bro-y manager of a sporting goods store, Richie (American Vandal’s Jimmy Tatro, with far too few scenes), and applied to Stu (Nanjiani), who works there. Stu cordially hates Richie. But he has a problem.

Stu works two jobs: retail and driving for Uber. He could probably live on his clerk salary at the sporting goods store, except that it doesn’t leave him any extra cash, which is exactly what he needs. Why? He’s in love with his best friend Becca (Betty Gilpin), who wants to open a spin gym for women called “Spinster,” and he’s agreed to be her business partner. That’s what the Uber money’s for.

But when Richie calls Stu’s car right as they’re both leaving work for the day, then persists in calling him Stuber and being a general lunkhead during the ride, Stu’s too nice to do much more than request that Richie please not call him that. Plus, he can’t risk making Richie mad because Stu has a ratings problem: He keeps getting one- and two-star ratings from customers, often accompanied by racist commentary — “massive eyebrows obstruct vision”; “I thought those people were good at customer service” — and he needs to improve his rating so he can keep driving.

Meanwhile, down-on-his-luck LA police detective Vic Manning (Bautista), who despite his fearsome size and strength could not save his partner Sara Morris (Karen Gillan) in a shoot-out with some gangsters, is relentlessly tracking down the kingpin Oka Tedjo (Iko Uwais). Unfortunately, the day he gets the call informing him of Tedjo’s whereabouts, he’s scheduled to do two things: Attend his sculptor daughter Nicole’s (Natalie Morales) first gallery show, and get Lasik eye surgery. Which means he cannot drive.

The story quickly becomes a cross between an action comedy and a buddy-cop comedy, with a harder edge than your typical PG-13 fare; the film earned an R rating for its blood, violence, and language. (Also, some male full frontal.) Stu is desperate to end his shift and get back to Becca, who’s just split with her pro-ball boyfriend and wants him to come over and make her forget. (Sex. They’re going to have sex.)

Meanwhile, Vic wants to show Nicole that he hasn’t forgotten about her show, while also taking down Tedjo, and getting justice for Morris. Naturally, they both learn some valuable life lessons, I guess, about masculinity and what it means to be a “real man.”

Fine, whatever. Stuber’s not, in any meaningful way, great cinema. It’s not even a great version of what it is. But if you feel yourself tensing up throughout, then you might occupy the same hellish landscape as Stu (and Vic, for that matter).

Consider, for instance, Stu’s problem with low ratings, which passengers often post for reasons of caprice and spite. Uber, as a company, maintains well-known exploitative employment conditions that threaten someone like Stu’s ability to remain a driver. It’s like he’s living a real-life version of the Black Mirror episode “Nosedive,” or the terrifying real-life Chinese “social credit” system.

(Side note: For a movie that derives its very name from the company Uber, it seems incredibly weird that whenever we see people using the Uber app, it’s clearly not actually Uber’s interface. Whether Uber was approached about licensing by the film’s producers is unclear. It’s possible they couldn’t get the rights, but in that case, all this free advertising for Uber seems a little sad.)

There’s also the fact that Stu is working a second gig at all. In this case it’s because he wants to earn money to invest in Becca’s business, which isn’t strictly necessary; but with that said, if the American dream involves being able to launch successful small businesses, it’s a bit of a bummer that this is the only way he can find in Los Angeles to do it. (This is a cinematic trend: Jason Sudeikis’s character in Booksmart is the principal of a high school and moonlights driving a Lyft, and in his terrific 2017 comedy The Big Sick, Nanjiani also drove an Uber to supplement his meager stand-up comic income.)

There are also all kinds of indicators in the background of Stuber that point to our burgeoning age of anxiety. The day on which the events of Stuber take place, as we hear from a news report, is the “hottest day since 1911.” One subplot involves a grown man sexting underage girls. A group of male strippers (of course Vic and Stuber end up in a strip club; this is a cop movie set in LA) are treated abusively by their female boss. There’s torture at the hands of the police, both via Twitter (I can’t explain, you’ll have to see it) and actual torture and violence and brutality that shouldn’t be in the call of duty. There are pointless drone shots. The fact that Stu’s car is electric becomes an issue.

None of these elements alone is really too obviously problematic (except the torture and abuse stuff, which is jarring in a film that keeps trying to prove it’s woke enough about race), but taken all together, they paint a horrifying picture. Stuber is a movie about how awful it would be to find yourself driving an Uber in a buddy movie today, especially if you’re not white — how we’re governed by technologies and forces outside our control, how exploitative companies and bosses on one side and belligerent government entities on the other can make life into a living hell, and how racist Americans really can be.

I could be wrong, but I don’t think Stuber knows this. The movie seems to think it’s about how “real” men are sometimes big and muscly and punch criminals, and sometimes they’re just brave about their feelings. (If you’d like a better and cleverer version of that message, try another movie that came out the same day as Stuber — The Art of Self-Defense.)

But whew, I don’t know — I walked out of Stuber depressed, not just because the movie failed to make me laugh as much as I winced, but because it reminded me of the kind of stories that flash across my news feed every day, the same kind of stories I want a movie like Stuber to distract me from.

And yet as a stealth portrait of the dystopia of 2019, it’s not half bad. And maybe that was the idea all along: to tug at our sense of frustration in between the jokes and the gunfights. In the words of Vic as he hollers at Stu, trying to get him to finally let loose: “YES! GET ANGRY! OWN THAT SHIT!”

Stuber opens in theaters on July 12.