Prolonged school closures could be very costly for America’s students 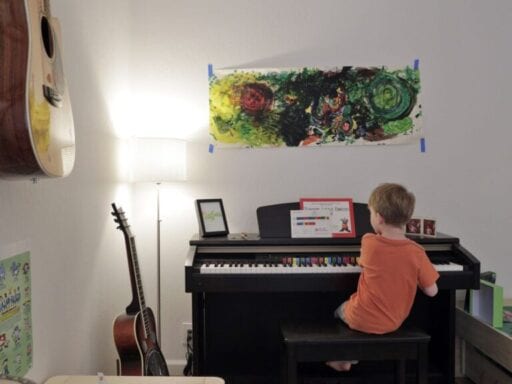 A child practicing the piano at home in Pacifica, California, in April. | Carlos Avila Gonzalez/San Francisco Chronicle via Getty Images

Experts are especially worried about younger and lower-income kids.

Prolonged school closures associated with the coronavirus pandemic are likely to have a major and negative affect on children’s learning, according to a wide range of experts — leaving some students behind academically for years to come, and even leading to meaningful lost income over the course of their lifetimes.

Problems are likely to be especially concentrated in younger children and lower-income households, but not necessarily limited to them.

Yet this has been mostly absent from the national debate over social distancing, which has tended to focus narrowly on the idea of opening up “the economy” rather than the nation’s schools. Even states that have not issued full-scale stay-at-home orders have generally closed schools, and the Trump administration’s reopening plan envisions bringing back movie theaters before educational institutions.

That’s a blinkered approach. Schools, of course, should not reopen if it can’t be done safely. But when balancing the risks and rewards of different kinds of activities, the fact that prolonged school closures are likely doing real long-term harm to an entire cohort of American children deserves more emphasis.

Kids are missing a lot of school

Schools closed at different points in March in different states, but they are currently not operating anywhere in the country even in states that have made a big show of staying open for business during the pandemic. Twenty-eight states have formally canceled the entire rest of the 2019-2020 school year, with three more “recommending” closures through the end of the year and the rest — a list that includes blue states like New York and New Jersey as well as red ones like West Virginia and Wyoming — claim they’ll be reopening in May.

Virtually all of those states, however, have already postponed their initial plans to reopen, so it’s far from clear that a mid-May reopening will happen.

Washington state has formally notified schools to prepare for the possibility that they won’t reopen in the fall, as has Maryland a bit less formally. It’s hard to find a state clearly committed to being back open by Labor Day.

The Trump administration, however, wants to reopen stores, gyms, and restaurants and relax strict mandates that white collar work be done from home as Phase 1 of reopening. A move to reopening schools would not happen until Phase 2, which requires case volumes to continue falling even as Phase 1 reopenings take place. In other words, if a state opens up over the summer and then cases start rising schools won’t be able to reopen. States could potentially be stuck in a stop-and-go implementation of Phase 1 measures with schools left as an afterthought.

Meanwhile, school systems have been taking stabs at distance learning. But this is not something America’s corps of teachers or principals has really trained for, and implementation is spotty. The potential for distance learning also varies by the age of the student. But it also seems likely to pose particular difficulties for lower-income students, kids with unstable family environments, or kids who lack strong intrinsic motivation — exactly the populations whose educational outcomes we worry most about.

Indeed, in many circles there is worry about the impact of something as banal as summer vacation on these populations — a starting point for thinking about the consequences of months of closures.

There is a longstanding line of research in education scholarship about “summer learning loss,” whereby kids seem to regress academically during the annual summer vacation. This seems like the best model we have for what happens when schools shut down for months at a time. (Unlike in a typical summer, however, most kids are not currently enrolled in any non-school organized activities, either.)

Much of the literature on summer learning loss is especially focused on the idea that while kids from low-income families start out behind academically, the gap is especially likely to increase during the summer.

This literature has provoked a long-running debate about experiments with year-long schooling (that have mostly proved disappointing) or else more targeted interventions designed to help ensure that even low-income families have enriching opportunities.

He argues that the apparent learning loss is an artifact of old-fashioned test designs and that if you look at more modern data, there’s no real evidence of backsliding. It’s true, he says, that children don’t learn much new stuff over the summer, but this is true for both poor and non-poor kids. Gaps between the performance of poor and non-poor kids thus have nothing to do with summer vacation and, if anything, provide an opportunity to close the achievement gap by giving poor kids bonus school time over the summer.

So I asked Hippel if he had a more optimistic perspective to share that would reassure people who are worried about kids losing school time.

“I do have a somewhat different perspective, but I’m afraid it’s not more optimistic,” he said.

Everyone is worried about prolonged school closures

But the reason kids aren’t learning much over the summertime is they generally aren’t trying.

The current school closures are not an extended vacation. Students are, in theory, engaging in distance learning, both online and through paper handouts. But in the overwhelming majority of cases, these distance learning paradigms are likely going to be less effective than traditional school. And the problems will likely be most severe for the lower-income, whose parents are least likely to be working from home and least likely to have the personal knowledge and wherewithal to act as effective homeschoolers.

Von Hippel notes that we do have evidence from other kinds of school year disruptions that all point to problems. A two-month teacher’s strike in New York in 1968 left students two months behind where prior cohorts had been when they returned to school. In 1990, the Francophone schools in Belgium closed for a strike while the Flemish-speaking ones did not. Looking at Belgian kids who were in school during the strike, French speakers were noticeably more likely to need to repeat a grade and made less progress into higher education later in life. Test scores suffered when Hurricane Katrina closed schools in and around New Orleans.

Having kids out of school is bad, and especially bad for poor children.

A harsh experience for the poor

I thought Michael Petrilli, a fellow at the conservative Hoover Institution and a profound skeptic of the status quo in public education, might have some happier thoughts on the disrupted schedule. But that’s not the case.

“All of this time away from school is going to be particularly devastating for poor and working-class youngsters,” he wrote in the Washington Post. “Their parents are often working the sorts of jobs that don’t have the option of being done virtually, and their homes are more likely to lack high-speed Internet and ample devices.”

Andrew Rotherham, the co-founder of Bellwether Education Partner and a education policy staffer in the Clinton administration, offered the most optimistic assessment I found, telling me that for middle-class parents of older kids, “this will be not that big of a deal.”

Even so, he says he’s very worried about “early grades where we’re focused on literacy which really is foundational to your experience in school and life” as well as for low-income kids of all ages. Many in this group count on schools not just for education but for a range of social services, and their parents may have limited math and literacy competency. He also notes that beyond the limited technological resources available to lower-income families we see even some well-resourced school districts, like Montgomery County in the DC suburbs, don’t really seem to be getting the job done in terms of remote learning.

Just a reminder that these are two of the highest capacity districts in the country – so should trigger some concern about what millions of students in less-resourced places are experiencing:https://t.co/FrNULvDJtI

Some other districts and charter school networks are doing better than this, of course. The point is simply that both the quality of and access to distance learning are highly variable. And even when the distance curricula are good it’s not clear how much benefit younger kids will get from them if their parents aren’t able to supervise them closely.

It’s not possible to boil down the value of education to just dollars and cents. But economists who’ve tried generally have found that in high-income countries, an extra year of education is worth about a 10 percent boost in income.

If you take that literally, the implication is that two or three months worth of school closure will be cost today’s cohort of schoolchildren thousands of dollars a year in lost earnings for their entire lives. Those thousands of dollars multiplied across millions of kids add up to tens of billions in lost income each year for decades.

That’s a bit simplistic, especially because, as experts all seem to agree, the harms of school closures won’t be felt evenly. But any back-of-the-envelope calculation suggests that closures ought to loom larger in the national discourse as a costly aspect of social distancing — albeit one whose costs accrue over the long term rather than the immediate future.

President Trump’s guidelines for reopening the country, by contrast, have sit-down restaurants and movie theaters coming back in phase one and schools not returning until phase two. I miss going to the movies, but the movie theater industry simply doesn’t have a very strong claim to being important to the country’s long-term economic future. Nor is their closure fueling vicious class divides in American society.

Schools should reopen when it’s safe to do so. But getting them back up and running should be a relatively high priority, rather than an afterthought.