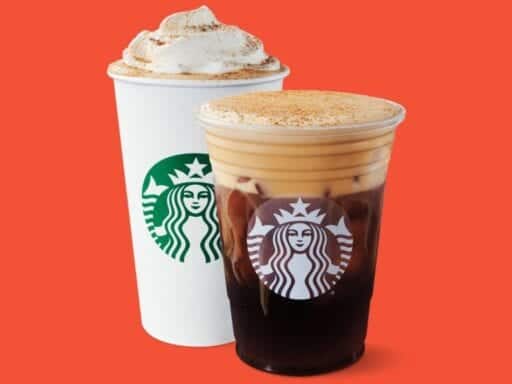 Pumpkin spice is America’s most hatable seasonal flavor. But Starbucks is leaning in even more heavily this year.

August 27 is not a day that is particularly known for feeling especially crisp or autumnal in most parts of North America. And yet it’s the day in 2019 — the earliest release date so far — that Starbucks chose to ready its blazing orange jugs of “pumpkin sauce” and unleash its annual run of pumpkin spice lattes upon its customers.

You’d be forgiven for mistaking this tone for one of disdain. Since its inception in 2003, the pumpkin spice latte has become something of a straw man for discussions about capitalism, seasonal creep, and the meaning of “basic,” resulting in widespread hatred for an otherwise innocuous beverage.

For example, back in 2014, at the height of pumpkin spice mania, this very website described the PSL as “an unctuous, pungent, saccharine brown liquid, equal parts dairy and diabetes, served in paper cups and guzzled down by the liter” — even though clearly the pumpkin spice latte is a highly delicious treat that pairs well with wearing vests and making dorky comments about how crisp the air feels today. Yes, it contains 380 calories; yes, it will make your coffee a rather unappetizing orange color; no, you should not “guzzle it down by the liter.”

But contempt for the PSL and other items of the seasonal pumpkin spice variety is often not really about the flavor itself. After all, there are plenty of other flavors we should all be way more furious about. (There is a shop in Scotland that serves mayonnaise ice cream, people!) Too frequently, it’s about sexism, class anxiety, and our collective skepticism of savvy marketing. After all, the PSL is doing something right: It’s Starbucks’ most popular seasonal beverage, with about 424 million sold worldwide. And in 2019, the chain is only leaning in further: Starbucks just announced the introduction of the Pumpkin Cream Cold Brew, finally admitting to the world that late August is still iced coffee weather.

The history of the PSL

The pumpkin spice latte almost didn’t exist. As former Starbucks veteran Tim Kern told Quartz, “A number of us thought it was a beverage so dominated by a flavor other than coffee that it didn’t put Starbucks’ coffee in the best light.”

Fortunately for Starbucks, the Tim Kerns of the company were ultimately overruled, because within a decade of its launch in 2003, the PSL became its top-selling drink, with more than 200 million of them sold. In 2015, Forbes estimated the PSL brought in around $100 million in revenue over a single season.

2015 was also the year that Starbucks changed its decade-old formula to include actual pumpkin for the first time, rather than simply caramel coloring and pumpkin pie spices (like cinnamon, nutmeg, ginger, allspice, and cloves). By all accounts, it tasted pretty much the same, just, according to its inventor, “cleaner.”

At that point, the PSL wasn’t just a cash cow; it was a cultural phenomenon. In part, that’s thanks to its marketing — there is nothing inherently seasonal about the spices that go in pumpkin pie, but Starbucks is able to convince us that the drink should only be consumed during the fall months, thereby increasing demand.

But there’s another reason the PSL exploded so much over the past decade. Culinary food trend analyst Suzy Badaracco told Vox in 2014, “Pumpkin became recognized as part of the comfort food trend during the recession in 2008,” due to its association with Thanksgiving and the holidays. In tough times, we’re more likely to crave foods that bring back happy memories.

Surely, though, the reason we all began talking about PSLs to begin with was their prevalence on social media. It’s not that they’re inherently photogenic — a Starbucks cup is a Starbucks cup regardless of what’s inside it, and the PSL doesn’t get its own specially designed cup the way the holiday drinks do.

It’s because when you add a PSL to a photo of, say, your new fall boots standing atop crunchy-looking leaves or a selfie featuring a festive dark lip color, it adds to the autumnal aesthetic. It’s not a coincidence that Instagram — the epicenter of cutesy fall tableaus — happened to blow up in the early 2010s, which is the same time it became cool to claim you despised pumpkin spice.

But maybe that’s not the whole story.

The backlash is about our anxieties around capitalism

The fact that the pumpkin spice latte — which, to many, conjures the scents and imagery of Thanksgiving — is released in increasingly hot weather year after year is often touted as an ominous harbinger of the evil forces of seasonal creep. “It’s agricultural revisionism!” argue some, citing the fact that pumpkins aren’t actually in season until autumn proper.

A viral John Oliver clip from 2014 declares as much, noting that “that bottle of pumpkin-flavored science goo sits behind the counter of Starbucks, never aging, like Ryan Seacrest”:

Perhaps in response to such criticism, in 2019 Starbucks is releasing its second pumpkin spice beverage since the PSL’s introduction, but this time it’s cold. The Pumpkin Cream Cold Brew, out August 27, is a vanilla cold brew with pumpkin cold foam and topped with pumpkin spice, which CNBC describes as “less sweet and has a stronger coffee taste than a pumpkin spice latte.”

The success of the PSL is also largely responsible for the barrage of pumpkin spice-flavored everything else, including cream cheese, dog treats, Kahlua, and an especially wacky seasonal crossover, Peeps. There have also been air fresheners, deodorant, even Four Loko (okay, that one ended up being a joke), resulting in the expected amount of hand-wringing about a food trend “gone too far.” (Indeed, back in 2010, the spice brand McCormick forecast that pumpkin spice would be a popular flavor for the holiday season, which in turn likely exacerbated the rush.)

When a food trend is as in-your-face as pumpkin spice is — ever been to a Trader Joe’s in October? — it forces us to think about how the free market is essentially designed to create this kind of phenomenon. If a product like the pumpkin spice latte sells, it’s natural under capitalism for other companies to attempt to replicate that success. But it’s uncomfortable when we see it happening on such an exaggerated scale.

Actually, the backlash is about our contempt for women

She continues, on the topic of “girly” food crazes like açai bowls, rosé, and pumpkin spice versus “manly” ones like barbecue, Flamin’ Hot Cheetos, and IPAs:

When those foods blow up, we judge women for falling for the marketing or trying to jump on the bandwagon, and we assume that because they like something other women like, they don’t have minds of their own. And on top of that, women are asked to reckon with, consciously or unconsciously, the perceived psycho-sexual symbolism attached to seemingly innocuous foods.

Plus, “masculine” foods are almost never chastised for being “basic,” the ever-nebulous term used to describe someone with average, predictable taste that’s usually reserved for women.

In the most stereotypical (and by now probably outdated) terms, a “basic bitch” wears North Face, leggings, and Uggs, and absolutely adores hashtag-PSLs, marking her as a woman with “a girlish interest in seasonal changes and an unsophisticated penchant for sweet,” as the Cut noted back in 2014.

There are often classist implications, too. In a BuzzFeed piece about “basic” and class anxiety, Anne Helen Peterson wrote:

Unique taste — and the capacity to avoid the basic — is a privilege. A privilege of location (usually urban), of education (exposure to other cultures and locales), and of parentage (who would introduce and exalt other tastes). To summarize the groundbreaking work of theorist Pierre Bourdieu: We don’t choose our tastes so much as the micro-specifics of our class determine them. To consume and perform online in a basic way is thus to reflect a highly American, capitalist upbringing. Basic girls love the things they do because nearly every part of American commercial media has told them that they should.

Essentially, hating pumpkin spice lattes is our way of othering those who drink them, and in the process, marking ourselves as decidedly un-basic.

Of course, this notion of what “basic” means is not the same way black people have been using it for decades, which, as Kara Brown explained in Jezebel, pretty much just translates to “I think that the stuff you like is lame and I don’t really like you.”

“Rihanna could become the official spokesperson for Starbucks pumpkin spice lattes and nobody would think of her as basic,” she wrote. “You know why? Because Rihanna does what she wants and what she thinks is cool and doesn’t give a damn about anybody else.”

Or maybe nobody cares anymore

Even if Rihanna suddenly became the official spokesperson of PSLs, however, there is also the possibility that, quite frankly, nobody really cares that much anymore. We seemed to have hit peak “pumpkin spice hot take” in the year 2014, with searches for “pumpkin spice latte” peaking in 2015.

Plus, the pumpkin spice bubble may have already popped. The analytics company 1010data revealed that despite the fact that pumpkin spice products for sale had risen by nearly 50 percent between 2015 and 2016, sales went up just 21 percent. We just aren’t craving it like we used to.

Maybe that’s because we’ve all been stricken with a case of seasonal beverage fatigue in general. Starbucks is constantly coming out with random gimmicky drinks, from the Unicorn Frappuccino to the so-called “secret menu.”

If that’s true, it tracks that we aren’t seeing the same kind of anger directed at what is arguably replacing pumpkin spice as autumn’s de facto flavor. In 2017, both Starbucks and Dunkin’ Donuts released maple pecan lattes. And according to restaurant menu data from that year, “mentions of maple as a flavor in nonalcoholic beverages on menus are up 86 percent this year over last. … Pumpkin mentions, on the other hand, are down 20 percent.” Yet nobody’s complaining about how stupid maple syrup is.

And these days, tweets about PSLs are way more in the vein of “Screw you and let me enjoy my shitty drink in peace, because everything is terrible.”

Pumpkin Spice Latte comes back tomorrow and I am 100% getting one in 91 degree weather because this world is a shitshow and I take joy where I can get it, like in delicious flavored coffee drinks.

People have also expressed exhaustion about the “actually-ing” over what pumpkin spice even is, as if anyone really wants to talk about it.

There are even ironic tweets poking fun at the automation of feminist responses to the anti-pumpkin spice brigade:

Women’s unabashed enjoyment of a thing has always led to wholesale dismissal of said thing as frivolous and/or bad. From early examples like needlework to more current cases like pumpkin spice and romance novels, we can track this trend throughout history. In this paper I will –

Anyway, this is all to say that maybe by now pumpkin spice has finally returned to signifying the autumnal blend of cinnamon, ginger, nutmeg, and cloves, and nothing more: not basic, not everything wrong with capitalism, and not gross. Because it’s not! It’s delicious.