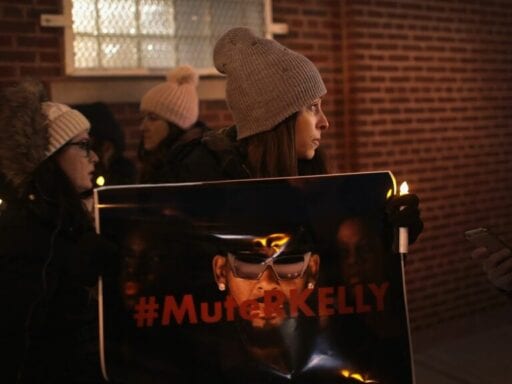 A new tape appears to show Kelly engaging in sexual acts with a 14-year-old girl.

R. Kelly may soon be facing indictment in Illinois, say new reports from the New Yorker and CNN.

Kelly has not officially been charged with anything, and the Cook County state attorney’s office told Vox that it could neither confirm nor deny that it is investigating Kelly. But both CNN and the New Yorker report that Illinois law enforcement officials have received a videocassette that appears to show Kelly engaging in sex acts with a very young girl. And in the New Yorker, reporter Jim DeRogatis — who broke the first R. Kelly sex scandal story in 2000 — cites a “senior law enforcement official” who says that the tape “may soon lead to [Kelly’s] indictment in Illinois.”

Please be aware that this story contains a brief but graphic description of the apparent sexual assault of a minor.

Celebrity lawyer Michael Avenatti wrote in a statement on Twitter that the tape came from his office. Avenatti says he is representing multiple clients with complaints against Kelly, one of whom he described to CNN as a “whistleblower.” He says the tape contains new material that has never before been criminally investigated, and that the incident it depicts falls within the Illinois statute of limitations on sexual assault (three to 10 years, depending on the exact charges).

In response to press inquiries, attached is a stmt regarding our work on the R. Kelly matter since April, including the discovery of new critical video evidence establishing his guilt. We will continue to work tirelessly to ensure that this predator is brought to justice. pic.twitter.com/D0dGFzgXlX

Reporters for CNN watched the video and offered a fairly graphic summary of its contents. According to CNN, both the man who appears to be Kelly and the girl in the video describe the girl’s body parts as being “14-year-old” multiple times. The girl calls the man “daddy,” and at one point he urinates on her. Most of these details match descriptions of the sex tape for which Kelly was previously indicted on child pornography counts in 2002. (Kelly was found not guilty.)

In a statement emailed to Vox, Kelly’s lawyer Steve Greenberg maintained his client’s innocence. He wrote, “I have not been contacted by anyone connected with law enforcement, nor has R Kelly. Mr. Kelly denies that he has engaged in any illegal conduct, of any kind whatsoever.”

Greenberg further questioned Avanetti’s credibility, noting that Avanetti himself “was the subject of unfavorable news articles just yesterday.” (Avanetti gave up control of his company on Wednesday as part of a dispute with a former partner.)

Greenberg added that Kelly “would like to be able to continue to write and sing and produce and perform.”

If R. Kelly is indicted on child pornography charges for this tape, it won’t be the first time he’s faced such accusations in a courtroom. In 2002, Chicago police received a copy of a tape that — like the tape currently in question — appeared to show Kelly engaging in sex acts with and urinating on a very young girl, and they indicted Kelly on 21 counts of child pornography.

Kelly’s lawyers held off a trial for four years, in a strategy experts call “victory by delay,” and in the interim successfully knocked out seven of the charges against Kelly. When he eventually went on trial, it was for only 14 counts of child pornography — and Kelly was found not guilty.

In that case, the defining question was the age and identity of the girl on the tape. The jury all agreed that the man on the tape was clearly Kelly, but the young woman whom police identified as the girl on the tape said that it wasn’t her and refused to testify. Although the girl’s family members, friends, and teachers all took the stand at Kelly’s trial and confirmed her identity and said she would have been 14 at the time the video was made, the jury eventually concluded that it could not determine her identity beyond a reasonable doubt — and as a result, they couldn’t determine that she was legally a child and that the tape was in fact child pornography.

While Kelly largely avoided public scandal for almost 10 years after the trial, he made headlines again in 2017 when DeRogatis reported that Kelly was holding multiple young women in his home and brainwashing them in a “cult-like” atmosphere. (Kelly maintains that all the women living with him were there of their own free will.)

Earlier this year, the Lifetime docuseries Surviving R. Kelly galvanized widespread outrage against Kelly. It featured harrowing first-person accounts from multiple women who say Kelly abused them, from the parents of young women who they say are currently being held in Kelly’s “cult,” and from former employees of Kelly who confirmed the stories.

In the series’ wake, multiple musicians spoke out against Kelly. Radio stations announced they would boycott his music. Law enforcement in Cooks County, Illinois, and Fulton County, Georgia, both reportedly began pursuing new criminal investigations against him.

Still, experts suggested that if all law enforcement officials have against Kelly is the evidence presented in Surviving R. Kelly, he will be difficult to prosecute. Fulton County was reportedly exploring the possibility of charging Kelly with illegal imprisonment, but in January, victims advocate Maureen Curtis told me that it’s hard to make such charges stick without evidence of physical coercion. Juries tend to want to see evidence of locked doors and guards holding captives at gunpoint; Kelly, however, is mostly accused of using psychological coercion and emotional abuse to control his victims.

On the one hand, a tape showing Kelly involved in sex acts with a child might remove the fuzzy, difficult-to-prosecute questions of emotional abuse and brainwashing from the case and turn it into something easier to prove in a courtroom. If prosecutors can show that the figures on the tape are Kelly and a 14-year-old girl, then they can show that he created illegal child pornography.

On the other hand, turning the case into a child pornography case also turns it into a case that Kelly has already demonstrated himself capable of winning.

What remains to be seen is whether the post-#MeToo era would respond differently to Kelly’s defense.

Woody Allen got a book deal. Staff at his new publisher have walked out in protest.
Vox Sentences: The pope wants whistleblowers on sex abuse
Trump: White House counsel Don McGahn will leave after Kavanaugh’s confirmation
Joe Biden expected to announce Janet Yellen as next treasury secretary pick
What the 2020 candidates’ merch says about their campaigns
How your split ends can help clean oil spills