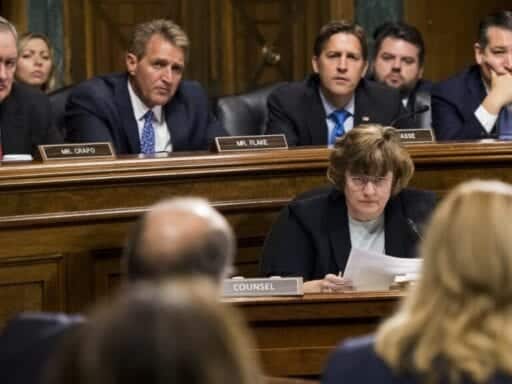 The Arizona prosecutor wrote a memo to the GOP after questioning Christine Blasey Ford and Brett Kavanaugh.

Ford alleges that in the early 1980s Kavanaugh pinned her down, tried to take off her clothes, and covered her mouth as she screamed while they were both at a party in high school as his friend, Mark Judge, looked on. Kavanaugh has vehemently denied her claims, and now the FBI is investigating what happened.

Mitchell’s memo, however, isn’t based on the results of that still-pending investigation, but her own review of the evidence after she questioned Ford and Kavanaugh during a Senate Judiciary Committee hearing about the allegations last week. Republicans on the panel, who are all men and all white, brought her on as a “female assistant” to participate in the hearing.

Mitchell, a Republican, wrote in the five-page memo that she did not operate in the political world. But the memo’s contents appeared to provide the GOP with a set of talking points on Ford and Kavanaugh. She wrote that, in a legal context, Ford’s charges wouldn’t hold:

A “he said, she said” case is incredibly difficult to prove. But this case is even weaker than that. Dr. Ford identified other witnesses to the event, and those witnesses either refuted her allegations or failed to corroborate them. For the reasons discussed below, I do not think that a reasonable prosecutor would bring this case based on the evidence before the Committee. Nor do I believe that this evidence is sufficient to satisfy the preponderance-of-the-evidence standard.

No one who Ford has identified as being at the party — including Judge, Patrick Smyth, and Leland Ingham Keyser — has corroborated Ford’s allegations. In a letter to the judiciary panel sent overnight Friday, Keyser’s lawyer said she doesn’t remember the alleged incident but doesn’t refute Ford’s account.

Rachel Mitchell, prosecutor hired by Judiciary Committee Republicans writes 5-page memo sent to all GOP senators on Ford testimony tonight. “I do not think that a reasonable prosecutor would bring this case based on the evidence before the Committee.” pic.twitter.com/h9eCcWPRwH

In the memo, Mitchell writes that Ford’s account of when the alleged assault happened has been inconsistent and that she has “struggled” to name Kavanaugh, pointing out that he wasn’t named in the 2012 and 2013 therapy notes about Ford discussing her alleged assault. She also writes that Ford has “no memory of key details of the night in question” that could help corroborate her account, such as how she got to and from the party and where it took place.

But this isn’t a trial

Mitchell’s memo explicitly states that this is not a situation in which Kavanaugh is on trial, and it’s not a case she’s prosecuting. Kavanaugh isn’t on trial for sexual assault, he’s interviewing for a job on the highest court in the United States.

Vox’s Laura McGann recently explored that disconnect, wherein members of the GOP are decrying that Kavanaugh is being unfairly prosecuted and his life “ruined,” and Democrats say he’s simply going through a process to obtain an important, lifetime-appointed job. Per McGann:

Perhaps there are jobs where it doesn’t really matter if a candidate has a dubious past or if he’s a liar. Supreme Court justice is not one of those jobs. The Senate is faced with a critical hire; whoever takes the open seat on the Supreme Court will help decide key legal questions for decades. This person must have the faith of the public. Only a serious hiring process by Senate Republicans can make this happen.

Mitchell’s memo may provide Republicans with talking points about Kavanaugh as the FBI investigation into the allegations against him goes on. But it also makes the point that this isn’t a trial, and Kavanaugh doesn’t face potential prosecution — just because there might not be a criminal case here doesn’t necessarily mean Kavanaugh should get the job.

Why Ukraine is at the center of the latest Trump scandal
US and China reach a “phase one” trade deal
Hospitals are cutting staff just when America needs them most
“I want him out”: Lisa Murkowski calls for Trump’s resignation
Felicity Huffman sentenced to 14 days in a college admissions case that raises questions of race and...
This video clip shows how Trump defenders have dramatically moved the misconduct goalposts