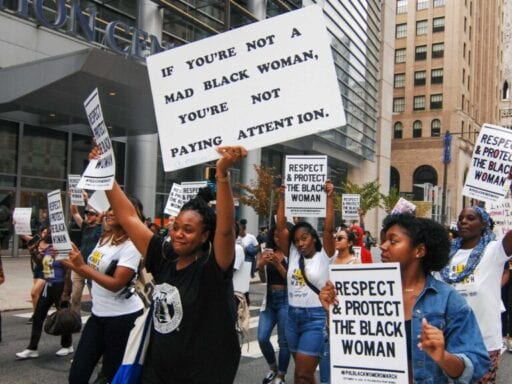 Share
Loading...
Black women, girls, and their allies from across the city came out to march in solidarity in Philadelphia, Pennsylvania, on September 14, 2019.  | Cory Clark/NurPhoto via Getty Images

Abuse is all I’ve known as a black woman in America.

The first time the father of my children verbally accosted me, I had suggested locs for our then-unborn daughter. We were driving through our Jersey City neighborhood and I was six months pregnant.

“You want to make all the decisions!” he screamed while angrily speeding down the road. When I tried to explain to him that he may not understand what it takes to care for a little black girl’s hair, he bellowed, “You tryna say I’m gonna be a bad father?”

Violent, angry outbursts became normal in our interactions once I became pregnant. In an instant, the father of my children would go from being the warmest, most dedicated man to a monster. Then, after every eruption, he pretended like it never happened or promised it was the last time.

On his first Father’s Day, he became enraged after waking up to find me absent from our shared bed. I had slipped out earlier that morning to buy us groceries to make a big breakfast.

“Tell me who you were with!” he screamed.

The father of my children has raged in front of my family, my neighbors, my friends, and even strangers. He uses aggression and manipulation to control me.

“Abuse is never okay,” my therapist told me when I shared these stories.

Abuse is all I’ve ever known as a black woman in this country. I alone do not have the power to fight against it. It’s a cycle that will take more than me to end it.

These cycles are what black people are trying to eradicate when we talk about the need for reparations. Reparations are not just about righting the wrong of slavery itself, they are also about addressing the longstanding systemic racism that continues to impact the lives of black people to this day. It is this legacy of abuses against black people that has resulted in a complex, racist system that wreaks havoc on black lives and makes our relationships tragically set up to fail.

What it means to normalize abuse as a black woman

Normalizing abuse is what often happens when you exist in racist, misogynistic American society as a black woman. I have been sexualized and degraded ever since the age of 11 when I became a part of the statistic that 60 percent of black girls are sexually assaulted before the age of 18. I have never known stability because my family had to constantly move in search of a home after being priced out of neighborhoods in Florida, New Jersey, and New York by gentrification. My mother had to work three jobs just to make ends meet, like countless black single mothers do, and I pretty much raised myself. I never had the chance to celebrate honor rolls, dean’s lists, or professional successes because they felt so small next to giant stacks of unpaid bills and obligations that can barely be met.

Black women face the highest rates of domestic violence and intimate partner violence compared to any other demographic. We are also the most likely to suffer serious injury or die at the hands of our partners. A 2003 study analyzed the prevalence of domestic violence in the black community and found intimate partner violence in black relationships is not only more common, but also more violent than among white couples. The University of Maryland and Indiana University researchers explained that “the anger, hatred, and frustrations of African American men, caused by institutional racism, are being displaced onto their wives and lovers.”

As a black woman, I’ve spent my life battling both covert and overt racism and misogyny, a wretched combination, inside and outside of my own home. Sometimes I believe it is this perfect-storm combination that makes me an easy target for abusive relationships.

Abuse doesn’t have to ever be “okay” for it to be normal. It just has to be a fact of life.

Abuse was a fact of life for my kids’ father as well. His parents used corporal punishment as a form of discipline as long as he could remember. They beat him with belts, belt buckles, tree branches, and wires. They made him kneel on graters for hours at a time. And while studies have found that black parents are twice as likely as white parents to use corporal punishment, they also highlight the truth that this is a practice adopted from white Europeans during slavery.

In other words, slavery is not “just in the past.” What black people adopted as a result of enslavement continues to haunt us and torment our physical and psychological well-being beginning in childhood and well into adulthood.

Reparations are about righting cycles of oppression

My kids’ father was raised in the poor, urban part of Jersey City where violence was the norm — an area “ghettoized’ by discriminatory New Jersey banking policies that made it practically impossible for minorities to get loans for “good” (i.e. white) neighborhoods. For his Haitian immigrant parents, purchasing an affordable home was their taste of “The American Dream.” They left their homeland — a country forced to pay the modern equivalent of $21 billion in reparations in 1825 to former French slave owners after Haitians won their freedom from the colonial power, consequently making it the poorest nation in the Western hemisphere — just to realize that dream. For their son, who had to navigate the trauma of living in the “hood,” like getting stopped and frisked by police since grade school and getting jumped over false accusations, it was more of a nightmare. He learned to always be suspicious and on edge.

“Anyone can just flip on you,” he used to explain about growing up never knowing the difference between friends and enemies.

I witnessed it myself. About two years ago, a friend of his showed up at our home threatening him with a gun. He was angry because his car got repossessed while my partner was holding onto it for him while he visited family for two weeks.

“You let them take my car!” the friend screamed, even though he had not paid his car note in months.

I don’t know why his friend couldn’t make the payments, but I do know that black men are the most likely to be unemployed, underemployed, or deemed unemployable “convicts.” I also know how hard it is to take personal responsibility for your own circumstances when they always feel so outside of your control. I know his anger was misdirected and may seem illogical, but it likely has a valid source.

Black people have been dominated and oppressed by white supremacy that constantly evolves and becomes more clandestine over the centuries. From slavery, Black Codes, Jim Crow, CIA and FBI attacks on Civil Rights era leaders, redlining, the school-to-prison pipeline, health care inequality, employment discrimination, mass incarceration, lead poisoning our water systems, and police violence, we often forget that it is these unknown destructive forces in our lives that should be the source of our scorn. It is no surprise that we sometimes take out our anger on one another.

For black people, the call for reparations begins with the desire for white people to grapple with the atrocity of slavery. Can white people imagine how truly infuriating it is to know the only people who received reparations when slavery came to an end were white slave owners? Like slave-holding French colonizers, American slave owners received $300 per freed slave after Abraham Lincoln signed the Emancipation Proclamation in 1862. And yet, Americans readily dismiss the country’s need to atone for its original sin.

But the need for reparations, just like the white history of oppressing and discriminating against black people, does not end there. Many scholars argue that reparations are the only remedy to address the substantial black/white wealth gap that no education, job, or income will ever close. For millions of black people living in poverty, reparations may be the only way to ensure the affordability of proper mental health services. Or the only way the segregated school system, in which zip code and property taxes often correlate with educational opportunity, can finally give black children access to high-quality learning. For those in redlined “ghettos” or those with subprime mortgages that are disproportionately dealt out to people of color, reparations may finally give them access to homeownership in good neighborhoods, or they may finally be able to afford to build, maintain, and protect their own.

America will remain separate and very unequal if there is no commitment to addressing its racist abuse. Families like mine will continue to be torn apart by deep-seated trauma because we lack the resources to do anything about it. We need to heal from centuries of trauma. We need to rebuild our communities and mend our relationships with one another. We cannot do so while buried in debts and hardship.

There is only so much work I can do alone

“Abuse is a choice,” my therapist often reiterates.

That has been the hardest fact for me to confront: that abuse is knowingly and intentionally inflicted. For a long time, I allowed myself to believe my partner was “out of it” when behaving the way that he was, a lie I told myself to explain why a man who claimed he loved me could treat me the way he did. I battled with the same cognitive dissonance for all of my life over my relationship with America.

“If only I work harder,” I told myself.

I tried to work harder. Per the suggestion of our counselors, we attended individual therapy once a week and couples therapy once a month. Things seemed to be looking up — until we received the first bill. We were shocked that, despite the fact that we both had insurance, the co-pays amounted to $400 a month. For a new family already buried in student loans and struggling to find affordable housing, paying that amount was unsustainable. After a few months, we stopped going. And the relationship, like my relationship with the country, remained abusive and one-sided.

But I hold out a little bit of hope. My kids’ father has agreed to seek therapy again. Meanwhile, talk of reparations has come up in the 2020 presidential campaign. Most Democratic candidates, at the very least, agree that the government should move forward with Rep. Sheila Jackson Lee’s H.R. 40 bill put forth to establish a commission to study slavery and the oppressive discriminatory practices that followed, to begin to find a solution. Maybe America is finally ready, like my partner, to take the first step on the long journey to righting its wrongs against people who share my hue.

In the next couple of years, two of the most important relationships in my life will either move forward — strengthened by true reconciliation, where amends are made — or wither away, leaving behind a damaging continued legacy of abuse and hurt.

I am a black woman who is tired of unkept promises: from lovers, from bosses, from political candidates, from society as a whole. I am ready for my abusers to make good on their promises of “change.” Because I can’t live like this. And I refuse to blame myself any longer.

Tiffanie Drayton is a freelance writer who proudly shares the beauties and hardships of being a black woman. Find her on Twitter @draytontiffanie.