Roger Stone was just sentenced to 40 months in prison 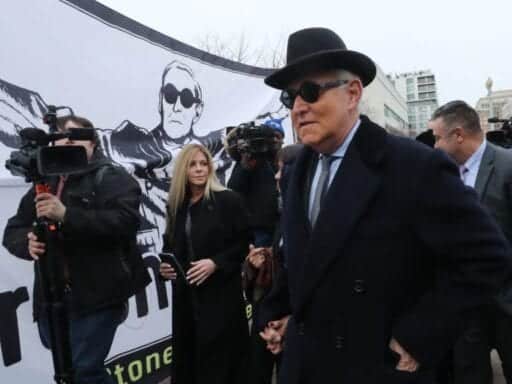 “He was prosecuted for covering up for the president,” Judge Amy Berman Jackson said.

“The defendant lied about a matter of great national and international significance,” Judge Amy Berman Jackson of the US District Court for the District of Columbia said at Stone’s sentencing hearing.

The charges against Stone were about false testimony to the House Intelligence Committee regarding his efforts to get in touch with WikiLeaks during the 2016 campaign — and Stone’s pressure on another witness to stick to his false story.

The sentencing hearing was appropriately dramatic for a case that has had many dramatic turns of events — most recently, in Justice Department leaders’ sudden disavowal of prosecutors’ initial sentencing memo for Stone, a move that led the entire prosecution team to quit the case.

At the hearing, Jackson grilled the new prosecutor appearing for the government, John Crabb, about contradictions in the government’s two sentencing memos, and quizzed him about how and why the government changed its position.

Crabb said the initial sentencing recommendation made it up to the interim US attorney for the District of Columbia (the newly appointed Timothy Shea), and that there were “consultations” with Justice Department leaders about it. But, he said, “there was a miscommunication” between Attorney General Bill Barr and Shea on what sort of sentencing memo would be appropriate. He said he could not provide further details on that miscommunication.

Jackson also pointed out that Crabb’s signature was on the second sentencing memo, and asked whether he actually wrote it or whether he was directed to write it. Crabb declined to answer both questions, saying he could not disclose internal Justice Department deliberations.

Still, in the end, Jackson concluded that the sentencing guideline recommendation of seven to nine years was overly harsh as applied to this case (though she stressed that the prosecutors who applied it did nothing wrong and acted perfectly appropriately). And while she was quite harsh on Stone, she concluded that a sentence of three years and four months would be more appropriate.

Hanging over all this has been the question of whether President Trump will pardon Stone or commute his sentence. He seems to want to but has held himself back from doing so — at least so far. Now, Stone has gotten a sentence substantially less than the one that so offended Trump. So will the president still step in?

What Stone was sentenced for

During the 2016 campaign, Roger Stone made various efforts to get in touch with WikiLeaks, to try to get ahold of emails the group had obtained related to Democrats and the Clinton campaign. (Russian intelligence officers had hacked emails from the Democratic National Committee and Hillary Clinton’s campaign chair John Podesta; those emails were eventually posted by WikiLeaks.)

Now, it’s never been shown that Stone was successful in getting any inside information from WikiLeaks. However, when the House Intelligence Committee began looking into the matter in 2017, Stone tried to mislead them about what happened.

Specifically, he claimed that all his contacts with WikiLeaks came through just one person: comedian and radio host Randy Credico. In fact, though, Stone had emailed conservative author Jerome Corsi on July 25, 2016, telling him to “get to [WikiLeaks founder Julian] Assange” and “get the pending WL [WikiLeaks] emails.” About a week later, Corsi reported back with some information about what he said were Assange’s plans.

It remains unclear whether Corsi actually succeeded in getting in touch with Assange, or whether his information was any good. What is clear is that Stone went to great lengths to hide Corsi’s involvement. But we don’t know for sure whether he was trying to cover up something damning, or whether he just spun up a rather pointless web of lies. (The discussion of this topic in the Mueller report remains almost entirely redacted.)

Eventually, though, prosecutors from special counsel Robert Mueller’s team zeroed in on Stone — and in January 2019, he was arrested and indicted. He was charged with:

And after a trial last November, the jury found Stone guilty on all seven counts.

The controversy around Stone’s sentencing

With Stone’s conviction in the books, prosecutors had to come up with a recommendation for his sentence. And on February 10, the team of four prosecutors submitted a filing saying that a sentence for Stone of between 87 and 108 months (about seven to nine years) — a range that was calculated in accordance with standard sentencing guidelines — would be “appropriate.”

President Trump reacted with fury in a set of late-night tweets. “This is a horrible and very unfair situation,” he tweeted at 1:48 am on Tuesday the 11th. “The real crimes were on the other side, as nothing happens to them. Cannot allow this miscarriage of justice!”

But the really surprising developments came later that Tuesday. First, word leaked out to a Fox News reporter that the Justice Department agreed the sentencing recommendation was too harsh and planned to reverse it. DOJ ended up doing just that — and just before it did, all four prosecutors on the team quit the case. (One resigned from the government entirely.)

Attorney General Barr later confirmed that the decision to water down the requested sentence for Stone came from the highest levels of the Justice Department — and while he argued his decision was justified on the merits, the move raises questions about whether friends of the president have different standards applied to them by Justice Department leaders.

The sentencing hearing itself

The hearing kicked off Thursday morning with a lengthy discussion about what the appropriate guideline recommendations were for Stone’s case. (The government has various rules used to calculate what an appropriate sentence range for an offense should be — but the judge is then free to depart from that recommendation as she wishes.)

This discussion got to the heart of the controversy over Stone’s sentencing memos. The previous prosecution team had argued that Stone’s conduct merited various hefty enhancements in what’s known as the “offense level” (basically, how serious the offense is and how stiff a sentence it should get).

The initial prosecutors argued that Stone’s conduct deserved these enhancements because it involved threats of causing someone physical injury, substantial interference with the administration of justice, and attempted obstruction of the prosecution (via Stone’s social media postings, including of a picture of crosshairs over Judge Jackson’s image), and was extensive in scope. (Prosecutors’ sentencing memo was more muddled on whether some of these should apply, but at the hearing, Crabb backed all of them.)

Jackson sided with prosecutors on all but one of these recommended enhancements (the final one) — which effectively meant that she thought the initial sentencing memo for Stone was appropriate. She said Stone’s messages to Credico were “hardly” just “banter,” and that he had “engaged in threatening and intimidating conduct toward the court” as well.

When she announced Stone’s sentence, she used some extraordinary rhetoric. “The truth still exists. The truth still matters. Roger Stone’s insistence that it doesn’t” poses “a threat to our most fundamental institutions, to the very foundation of our democracy,” she said. She added: “The dismay and disgust at the defendant’s belligerence should transcend party.”

Jackson also referenced Trump’s comments on the case, calling them “entirely inappropriate” — but she said she wouldn’t hold them against Stone, concluding that three years and four months would be an appropriate sentence.

Whether the president steps in or not, Stone isn’t headed to prison just yet. His team recently filed a motion for a new trial, alleging misconduct from a juror. Stone’s sentence won’t be carried out until Jackson hears arguments on that issue and rules on it.

The Trump administration just backed down on its attempt to kick out foreign students
“A Juneteenth like no other”: Juneteenth celebrations take on a special meaning this year
Here’s how Facebook plans to make final decisions about controversial content it’s taken down
The next Democratic debate is only 8 days away
What we know about a shooting, stabbing, and fire in Honolulu, Hawaii
Live results in New York, Colorado, Utah, Oklahoma, Maryland primary elections