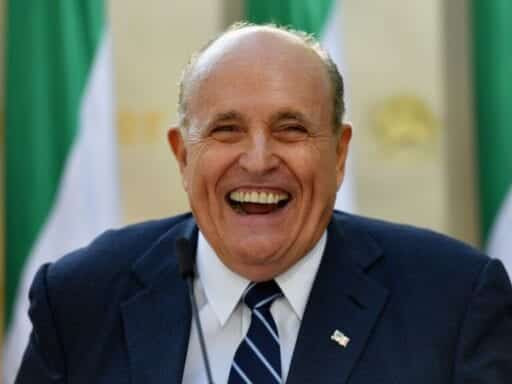 New reports reveal that Giuliani sought payments of hundreds of thousands of dollars from Ukrainian sources.

When Rudy Giuliani talked with top Ukrainian officials about getting dirt on Joe Biden earlier this year, he also wanted something else: lots of money.

That’s the upshot of two new reports from the New York Times and the Washington Post, both of which are based on draft documents and legal agreements apparently drawn up by President Donald Trump’s personal lawyer and his allies.

At one point in early 2019, Giuliani reportedly wanted the then-prosecutor general of Ukraine, Yuri Lutsenko, to pay his consulting firm $200,000 — purportedly to help Ukraine’s government recover illegally embezzled assets. Another time, Giuliani drew up papers calling for a $300,000 payment, this time from Ukraine’s Ministry of Justice.

Now, there’s no evidence that any of the above deals were ever completed.

But diGenova and Toensing eventually did end up scoring some Ukrainian cash. At Giuliani’s suggestion, the Ukrainian oligarch Dmitry Firtash hired them for help in a legal proceeding, in exchange for which he’d aid in the dirt-digging effort, according to the New York Times. (Firtash is facing bribery charges from the US Department of Justice and is currently in Austria fighting extradition.)

The revelation that Giuliani was seeking Ukrainian money could be of significance to the active investigation into him by the US Attorney’s Office for the Southern District of New York (SDNY). Prosecutors there have already indicted two of Giuliani’s associates, and have also been seeking information on Giuliani’s business and finances.

The key figures in all this, among Giuliani’s crew, are:

At the beginning of this year, this crew had extensive discussions with Yuri Lutsenko, who at the time was Ukraine’s prosecutor general.

As has been previously reported, Lutsenko was making some claims that could have been quite helpful to Trump: He said he was investigating Ukrainian interference in the 2016 election, as well as the Ukrainian gas company Burisma (which Hunter Biden sat on the board of). Lutsenko also had his own grudge against the US ambassador to Ukraine, Marie Yovanovitch, and claimed she was corrupt. (He eventually admitted those claims were false.) Lutsenko made many of these allegations in articles Solomon wrote back in March.

We knew all that. What we did not know was that, in February, Giuliani had begun negotiating with Lutsenko for a potentially lucrative business arrangement.

The documents described by the Times and Post are various drafts of legal agreements in which Lutsenko or other Ukrainians would retain some combination of Giuliani, diGenova, and Toensing for services. The proposals included:

Most of these proposals claimed that Giuliani Partners, diGenova, and Toensing were being retained to help recover assets supposedly stolen from the Ukrainian government. However, some of the latter proposals also mention finding information about Ukrainian election interference or the Bidens.

But diGenova and Toensing did eventually find some Ukrainian money — from Dmitry Firtash. A Ukrainian oligarch with gas interests, Firtash was indicted by the US Department of Justice for alleged bribery back in 2014, and has been stuck in Austria fighting extradition every since. (US prosecutors have claimed he’s tied to the Russian mob.)

This summer, Firtash hired diGenova and Toensing to help with his case. According to an earlier New York Times report, he did so at Giuliani’s suggestion, and this arrangement was tied into the political dirt-digging effort.

Firtash’s legal team then helped get Solomon an affidavit from Viktor Shokin, in which Shokin claimed he was investigating Burisma and blamed the Bidens for his ouster. DiGenova and Toensing, meanwhile, met with Attorney General Bill Barr about Firtash’s case. The pair has been paid $1.2 million by Firtash, though some of that money went to Parnas.

Giuliani’s exact involvement with Firtash isn’t clear. He has claimed to have “nothing to do” with Firtash — but CNN’s Andrew Kaczynski reported Wednesday that Giuliani had, in fact, met with a lawyer for Firtash this summer.

Overall, there seems to be a lot we still don’t know about what happened here. But the new revelations from the Times and the Post suggest Giuliani and his crew weren’t just interested in Ukrainian dirt — they also wanted Ukrainian money. And diGenova and Toensing, at least, eventually got it.

How to take care of your skin while wearing a mask
A new government study shows how Trump’s tariffs have backfired
Tom Steyer’s foreign policy plan: Just do whatever Obama did
Impeachment and Iran
Trump’s decision to cut off aid to 3 Central American countries, explained
Canada just banned military-style assault weapons after its deadliest mass shooting