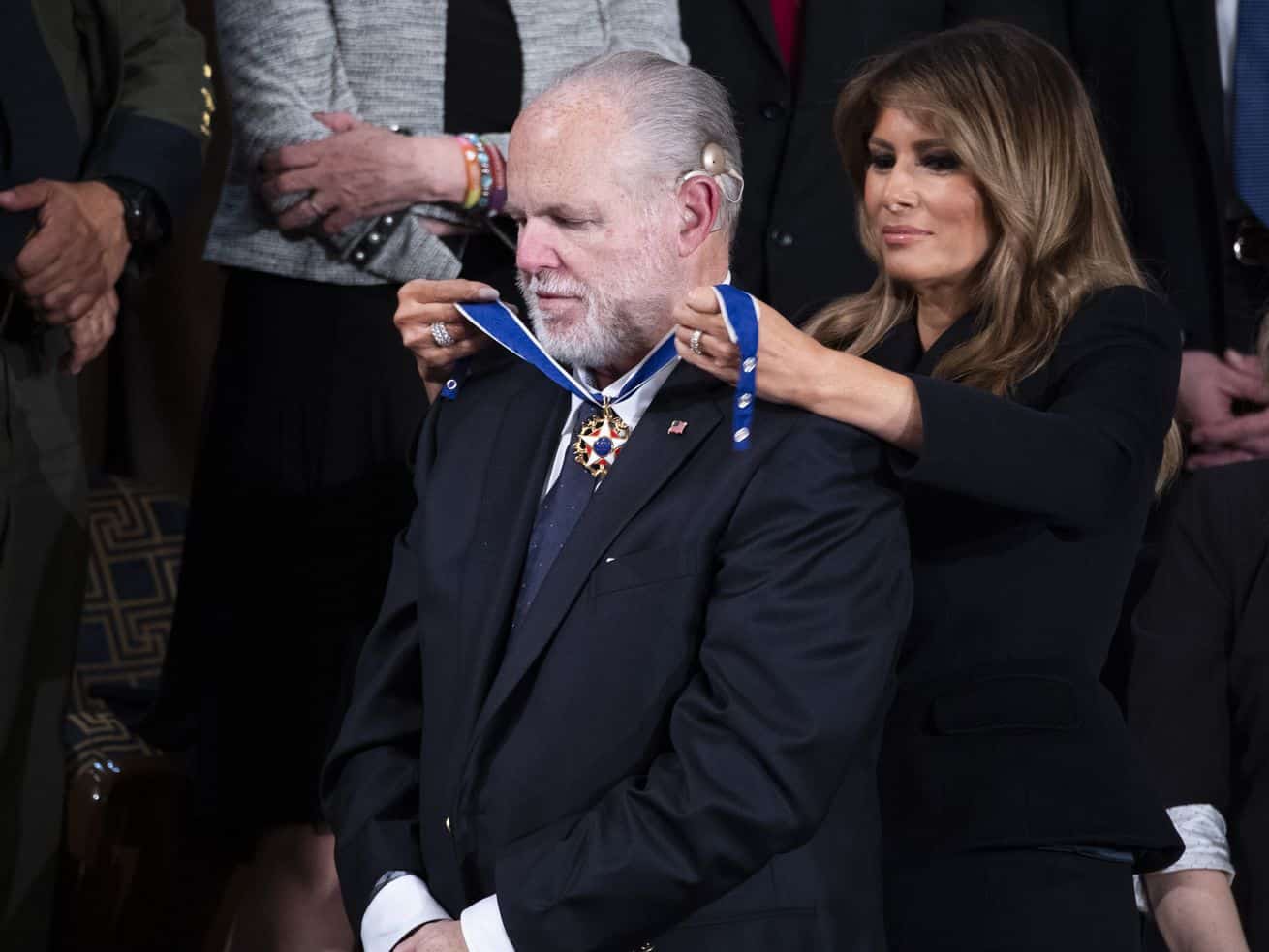 Rush Limbaugh is dead at 70. The Republican Party he poisoned is very much alive.

Obituaries for talk radio host Rush Limbaugh, who died on Wednesday at the age of 70, have frequently described him as a “conservative provocateur.” This is technically accurate but euphemistic, akin to calling Bashar al-Assad a “controversial leader.” Limbaugh’s stock in trade was bigotry and offense; his career-long defining trait was a willingness to channel the conservative id in unusually blunt and crude terms.

He repeatedly mocked the death of gay men from AIDS in the 1980s, suggested that the Clintons murdered their aide Vince Foster in the 1990s, called the NBA “the Thug Basketball Association” in 2004, and claimed that college student Sandra Fluke owed him a sex tape in return for taxpayer-subsidized birth control in 2012. He once did an impression of former Chinese President Hu Jintao that consisted mostly of saying “ching chong” over and over again; he had a guest on to sing a song titled “Barack the Magic Negro.”

These examples are not cherry-picked. Bigotry dressed up as “jokes” or “entertainment” were the stock-in-trade of Limbaugh’s show; he built and maintained a massive audience across decades not in spite of this commentary, but because of it.

“Rush built upon an already robust right-wing media and organizational infrastructure and married it to lowbrow entertainment culture, appealing to a deeply politicized audience of angry white men who did not consider themselves political,” writes David Astin Walsh, a historian of conservatism at the University of Virginia. “Limbaugh was the fountainhead for an entire generation of radical right-wing GOP politicians who owe their careers to the politics of resentment and white racial rage.”

Foremost among these leaders, of course, is former President Donald Trump.

Though Limbaugh initially supported Sen. Ted Cruz (R-TX) in the 2016 presidential primary, he came around to Trump and Trumpism — becoming one of the former president’s most influential boosters in conservative media. In return, Trump awarded him the Presidential Medal of Freedom — America’s highest civilian honor — during the 2020 State of the Union speech.

It was darkly appropriate. Limbaugh had more influence on the trajectory of the American right than the vast majority of political leaders; it is not a stretch to say that Trump presidency may not have happened without him.

“Rush Limbaugh radically transformed the Republican Party. He elevated conservative media into a coequal branch of party politics, and pioneered a style of rhetoric, argument, and entertainment that would come to define conservative politics,” writes Nicole Hemmer, a historian of talk radio at Columbia University.

That time Rush Limbaugh made fun of Michael J Fox and his Parkinson’s disease. pic.twitter.com/7CuHlE5Lpy

This, according to Hemmer, is very much not a good thing.

“The things we now think of as particularly Trumpian features of conservatism — the insults, the conspiracies, the blend of entertainment and politics and anger — Limbaugh had been doing it for a quarter-century before Trump showed up to the party.”

Rush is dead. The rest of us have to live with his baleful legacy.

Prior to Limbaugh’s emergence on the national scene in 1988, the conservative mass media as we know today did not exist. He was the first of the major talk radio hosts. Fox News arrived eight years after Rush; online conservative outlets like Breitbart were quite literally inconceivable at the time. Limbaugh proved that the particular combination of strident right-wing politics, outrageous commentary dressed up as “humor” or “just asking questions,” and incessant attacks on the “liberal media” could be commercially viable with an extremely large audience.

Limbaugh had a singular talent as a performer — an ability to capture the hearts and minds of his supporters with few parallels. His fans called themselves “Dittoheads” because callers would frequently “ditto” each others’ praise of whatever Limbaugh had just said. The dittohead ranks grew rapidly in the late 1980s and early ’90s, and the institutional Republican Party welcomed it. In 1994, first-term House Republicans — who had just won a majority — named him an honorary member of their class.

After his death on Wednesday, leading Republicans from both the party’s insurgent right and establishment wings lined up to praise him. Sen. Josh Hawley (R-MO) lauded him as someone who “lived the First Amendment and told hard truths that made the elite uncomfortable.” Former President George W. Bush described Limbaugh as “a friend throughout my presidency,” a “controversial” figure who nonetheless “spoke his mind as a voice for millions of Americans.”

But perhaps the most interesting conservative statement on Limbaugh’s death came from Noah Rothman, an editor at the venerable conservative magazine Commentary. Rothman, an anti-Trump Republican who has decried the party’s radical trend in recent years, nonetheless had kind words for Limbaugh as an invaluable counterweight to perceived media bias:

If you know a conservative under the age of 35, Limbaugh influenced them. Whatever you think of his career trajectory, and I have my frustrations in the Trump era, he was a profoundly important check on Democratic narratives in the press. A true legend. Rest in peace.

This has long been the conservative establishment’s approach to “provocateurs” like Limbaugh and his imitators on Fox News: Sure, they might be crazy, but they’re our crazies.

“People were willing to excuse his takes not only because of a kind of longstanding ‘gotta let people troll/free speech’ type ethic, but also because they to some extent agreed with the right-wing critique of liberal media hegemony,” Paul E. Johnson, a professor at the University of Pittsburgh who studies conservative political rhetoric, tells me. “If you really think you’re at the margins, you have to shout to be heard, and who cares if you ruffle some feathers in the process.”

But now, the party’s leadership is under attack by the monster they created, literally: the mob that attacked Congress on January 6, whose members openly stated their intent to kill lawmakers and Vice President Mike Pence, was a product of the fact-free, radical media ecosystem that Limbaugh helped build. Networks like One America News, unthinkable absent Limbaugh’s trailblazing, helped convince Republicans of Trump’s Big Lie that the election was stolen — the belief that directly caused the Capitol HIll riot.

Rush himself also promoted these theories, of course. And the day after the attack, he seemed to implicitly justify some of the violence in Washington.

“There’s a lot of people calling for the end of violence,” Limbaugh said. “There’s a lot of conservatives, social media, who say that any violence or aggression at all is unacceptable. Regardless of the circumstances. I’m glad Sam Adams, Thomas Paine, the actual tea party guys, the men at Lexington and Concord didn’t feel that way.”

Now the whole country is suffering the consequences from a Republican base that has been radicalized in no small part by decades of Limbaugh broadcasts blasted into their ears. They’ve been taught that Democrats are mortal enemies, and the media cannot be trusted, by opportunists and bigots like Limbaugh who profit from taking the most explosive and hard-right stance imaginable.

Limbaugh is dead. His brand of poisonous politics will not be laid to rest with him.