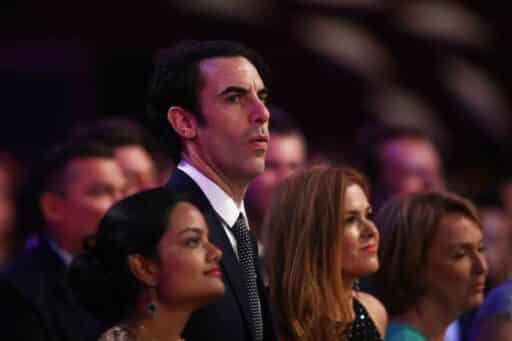 Who Is America?, the latest TV series in which comedian and provocateur Sacha Baron Cohen interviews people while in disguise and tries to get them to do or say outrageous things, arrived under a veil of secrecy. Showtime, the network airing it, announced the show a little over a week before it was scheduled to debut, and conducted exactly one screening for critics. Before seeing it, we were required to sign nondisclosure agreements saying we would not say anything about the contents of the episodes until a very specific time: less than 24 hours before the show aired.

In the course of making Who Is America?, Baron Cohen interviewed a variety of prominent political and media figures while in disguise, and he evidently got them to say ridiculous things. They are now complaining about being duped, with former Alabama senatorial candidate Roy Moore threatening to sue Baron Cohen for defamation. (Sarah Palin has also taken umbrage, though she hasn’t threatened to sue, while journalist Ted Koppel seemed rather sanguine about being tricked into appearing on the show.)

And with every bristle of outrage, every threat of a lawsuit, Who Is America? gets more attention than Showtime could ever buy, a kind of instant signal of which side the show is on in the never-ending culture wars.

This is how the game is played now, evidently: A comedian gets prominent right-wingers to say things on camera that they later try to insist they were tricked into saying. The right-wingers howl in protest at being mistreated. The outrage cycle gets covered in the media (including on this very website), which only boosts the profile of Baron Cohen’s show among those who wouldn’t mind seeing Palin or Moore knocked down a peg or two. And the cycle repeats itself, in aggregations of video clips and breathless reports of how people were “tricked” into participating in Baron Cohen’s new series and so on and so forth.

But make no mistake: The biggest dupes are anyone who watches.

Who Is America? is a grim, vaguely nihilistic show that uses a patina of political divisiveness to make fun of everybody it can find

The various politicians featured in Who Is America? — who include Sen. Bernie Sanders in the premiere and Dick Cheney in a later episode (I have seen both the Sanders and Cheney segments; I haven’t seen the ones featuring Palin and Moore) — are a bit of a false advertisement for the rest of the program, which could just as easily convey its central thesis by having Baron Cohen stand in front of a billboard reading “Most People Are Ignorant” for a few hours.

Indeed, the weirdest thing about this show has been the promise that it would reveal something dangerous or provocative about Americans, instead of what it actually reveals, which is what Baron Cohen always reveals, which is that most of us are too polite to call people on their bullshit.

Who Is America? is exactly what you’d think it is. Baron Cohen dons a disguise. He plays a character. He wins the trust of some unsuspecting yokels. He does outrageous things, or tries to get them to do outrageous things. And so on. This is Baron Cohen’s shtick, and it works from time to time. When he was first peddling it on Da Ali G Show, it could be surprisingly incisive, because it took place in a reality where it didn’t feel like we were all being pranked all of the time.

His film Borat, released in 2006, managed to walk a razor-thin line between outright mockery of its subjects and something more valuable, but it ultimately worked because it kept falling back on a kind of comedy of manners, a story about how important it is to many white Americans to be civil and polite above all else, even if that means politely listening (or even singing along) as a man sings “Throw the Jew Down the Well.” Borat, then, was an early strike against civility culture, against the idea that what’s most important is being nice, instead of being honest.

I don’t know what Who Is America? wants to do beyond cynically call attention to itself. I laughed at it a handful of times, because Baron Cohen is a talented performer and a funny guy. But the blood it draws is very thin indeed. Who Is America? concludes that reality stars are vapid, that you can get most people to do stupid shit if you turn a camera on them, and that politicians are insincere phonies who will read whatever you throw on a teleprompter in front of them.

The best segment in the series premiere involves no politicians or prominent guests. Instead, it features Baron Cohen in character as a stereotypical tote-bag liberal sort who rants about “President Hillary Clinton” and tries to build a bridge with two South Carolina Republicans by having dinner with them, before immediately telling them about how his daughter menstruates on the American flag and that his wife had an affair with a dolphin.

The joke here, such as it is, is that Baron Cohen’s statements get more and more unhinged, while his two dining companions try their best to simply drink in what he’s saying and toss out occasional dry asides.

The segment works because both sides of the conversation get to be funny, but it also underlines a fundamental problem with the series, which is that it never quite figures out how to deal with the idea that Republicans are willing to believe the absolute worst of Democrats — up to and including that they might have sex with dolphins — while the reverse isn’t really true. It creates a comedic imbalance the show isn’t prepared to parse or joke about, which means the series is always on to some other thing, like Baron Cohen trying to trick an art gallery owner into giving him some of her pubic hair.

As you can probably gather from the title of the show, Who Is America? wants to be about a lot more than the modern political divide within the US. It aims to tackle celebrity and wealth and reality TV culture. But its understanding of all of those things is facile — literally most of it can be boiled down to, “This is ridiculous” — and the specters it exhumes lurch onto screen like the ghosts of Christmas past. Sure, sock it to Roy Moore, to Sarah Palin, to Dick Cheney. But they’re fringe figures, at this present moment.

There’s a value, I suppose, to the notion that Baron Cohen is willing to talk torture with Cheney when so much of the rest of our culture has seemed intent on looking the other way as much as possible. And there are instances when Cohen exposes moments of genuine American racism or Republican gun love that feel like they’re coalescing toward a point.

What Who Is America? understands best is that all Americans have in common right now is anger

The closing credits of Who Is America? reveal that Baron Cohen has been joined by an all-star crew of behind-the-scenes personnel, including Nathan Fielder of Nathan for You fame. And just seeing Fielder’s name made me realize why Who Is America? kept missing the mark. Nathan for You is brilliant television, one of the best shows of this decade.

Like Baron Cohen (who is British), Fielder (a Canadian) is an outsider who wanted to show America an image of itself in a mirror. Unlike Baron Cohen, he did that by choosing a very specific target — the ridiculousness of American capitalism — and by firmly fixating the series’ comedic point-of-view, so the joke was always on him. In the series’ best episodes, Fielder becomes a sort of ur-American, a pure distillation of our inability to reflect.

We run away from ourselves because the only American dream we have left is the idea that we might accidentally reinvent ourselves into someone rich and successful. Fielder exploited that tendency to make great cringe comedy, but he also played a man who desperately wanted to believe he could become whole through exactly the right absurd scheme.

Baron Cohen’s new series fails to achieve this feat, perhaps because he splits himself among too many different characters (five in the two episodes I’ve seen). He too often wants the joke to both be on himself and on his interview subjects. He cracks open a whole country, finds dark and nasty shit, then invites you to laugh at the people who believe horrible things.

There’s something to be said, I suppose, for neutralizing their power by making them the butt of the joke, but that can also fuel more anger. Who Is America? doesn’t owe viewers anything but laughter, but it clearly has more on its mind. It’s the start of a prank war with the worst elements of an entire country, only Baron Cohen is going to pack up and go home before the other side retaliates. And I guess the rest of us get to hang out with whatever repercussions emerge.

This is assuming, of course, that anybody watches Who Is America?, which brings us back to the outrage cycle, to the cynical manipulation of a click-driven media that flocks to rage like flies to a bug zapper. What the series seems to best understand is that the only thing Americans seem to have in common right now is being mad all of the time about how little control we have over a country run amok, an economy funneling itself into the hands of a greedy few, and a planet cooking itself to a crisp.

We are powerless and scared, angry and bilious. We spit in each other’s faces, because at least we control the direction of our spit, and all the while we can hear somebody, somewhere laughing at us. And that only makes us all the angrier.

Maybe that laughing person is Baron Cohen, who has vivisected us and left us bleeding out on the table, secure in his cynicism and nihilism, in the idea that we are not worth saving and maybe never were. The only thing that keeps me from writing Who Is America? off entirely are the times I lay awake at night and think maybe he’s right.

Who Is America? airs Sundays on Showtime at 10 pm Eastern.