Sears filed for bankruptcy, but some of its stores will stay open 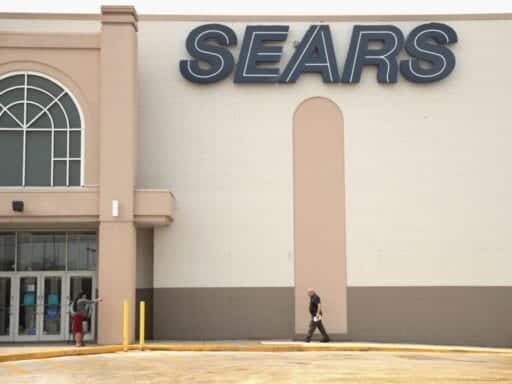 The company plans on closing 142 stores, but it’s not going out of business.

Sears, once the biggest retailer in the US, is filing for bankruptcy and closing more than 100 stores across the country. The 125-year-old retailer has been in decline for years and is no stranger to store closings, but the company’s bankruptcy doesn’t mean Sears is gone for good.

The Wall Street Journal reported last week that Sears had hired an advisory firm to prepare a bankruptcy filing, causing the company’s stock price to plummet. Sears, which started out as a mail-order watch business, was founded in the late 19th century and quickly ballooned into a retail giant known for its catalogs.

By the mid-20th century, Sears’s annual revenue accounted for 1 percent of the total US GDP. In recent years, though, the company has been known more for shuttering its dilapidated stores than for its successes.

Sears announced that it would be filing for Chapter 11 bankruptcy today — the same day it had a $134 million debt payment due. (Sears’s total outstanding debt is approximately $5.6 billion.)

Filing for bankruptcy is more than the next step in Sears’s long, slow collapse — it’s also an attempt to prevent the company from disappearing entirely. “The intention is to bring the company out on the other side,” a person familiar with the company’s bankruptcy negotiations told the Washington Post last week. Whether Sears can actually survive this latest stumble remains to be seen.

Here are three things you need to know about Sears’s financial woes.

1) Sears isn’t closing all its stores — at least not yet.

The company plans to close 142 unprofitable stores by the end of 2018, in addition to 46 other stores that were scheduled to close by next month, the Washington Post reported. Liquidation sales at those stores will begin soon.

Store closures aren’t new for Sears. The company has shut down more than 700 stores within the past two years, according to CNBC, and has sold 250 stores into a real estate trust called Sertiage, which converts former Sears and Kmart stores into different properties. In 2013, there were 2,000 Sears and Kmart stores across the country — today there are an estimated 820, nearly 200 of which will be closed by the end of this year.

More than 500 Sears stores survived the latest round of closings, though it’s unclear how long they’ll be around. The company told the Washington Post that it will continue paying employee wages and benefits, honoring member programs, and paying its vendors and suppliers. (Sears did not respond to The Goods’ request for comment regarding whether employees at shuttered stores would be transferred to remaining locations.)

Neil Saunders, the managing director of GlobalData Retail, attributes Sears’s decline to several converging factors. The company’s missteps, Saunders said in a statement, “arguably go back to the 1980s when Sears became too diversified.”

Several former Sears employees who spoke to CNBC on the condition of anonymity earlier this year said the company made crucial mistakes in the ’80s, including dropping employee commissions for certain items and ending the practice of letting managers curate their store’s merchandise.

But Lampert’s own decisions were a major contributor to its decline. In the aftermath of the Great Recession, Bloomberg reported, Lampert had the opportunity to cancel “a massive number of leases on Sears stores” but instead chose to renew them. It’s likely that many of those stores have since shuttered.

Lampert, who lives in South Florida, reportedly visits the Sears headquarters in Illinois only twice a year. He divided the company into more than 30 independent units, requiring executives from different divisions to compete against each other for resources.

According to a 2017 report by the Wall Street Journal, Lampert avoided investing in store upgrades and investments, causing the stores to fall into disrepair. Instead, the report said, Lambert used company money to buy Sears stock back from its investors.

Van Conway, a restructuring expert who worked on Detroit’s bankruptcy, told Bloomberg that Lampert’s constant restructurings have ultimately done little to keep the company afloat. “He’s been doing a lot of financial engineering, but he’s just been moving around the deck chairs on the Titanic,” said Conway. “It looks like he’s played almost a full deck of cards by now.”

3) Sears’s former CEO is staying on in a new position, and could potentially benefit from the bankruptcy

Lampert has stepped down from his role as CEO, but he will stay on as Sears’s chair of the board. Amid the bankruptcy filing and the impending store closings, which will leave hundreds of employees without jobs, Lampert will remain employed.

It’s true that Sears’s collapse has cost Lampert millions, and that he’ll likely lose millions more, but some argue that he still has a lot to gain. Paula Rosenblum, co-founder of Retail Systems Research, wrote in Forbes that Lampert is far from a sympathetic figure in this case. “To most observers, he has stripped the meat of the Sears bones and dried them out into beef jerky that his holding company ESL gnaws on periodically,” wrote Rosenblum. “He has sold off assets to the same ESL holdings, taken over the real estate of most of the stores that he collects rents on through Seritage (another of his companies) and managed to make himself the company’ biggest creditor in the process.”

ESL Investments, a hedge fund Lampert owns, is Sears’s largest stockholder and creditor. It’s also negotiating a $300 million debt financing with the company. In other words, Sears’s former CEO and current chair of the board owns the hedge fund that is helping renegotiate its bankruptcy, and will likely be profiting off the company’s debts. He also owns Sertiage, a retail trust to which Sears sold hundreds of properties in an attempt to boost its own cash flow.

“If this goes into Chapter 11 and the financial engineering and the rolling over stops, then he’s got himself an unbelievable conflict of interest situation,” Savoldelli said. “He’s going to be tied up in the courts for a decade.”

In the meantime, stores across the country will be preparing for liquidation sales — but retail experts warn that even going-out-of-business sales aren’t as great for consumers as they may seem. According to Rosenblum, in the first two weeks of a liquidation sale, prices tend to be the same as they would be anywhere else.

It could still be worth it to drop by your local Sears and see what deals you can find. After all, it might be your last chance to do so.