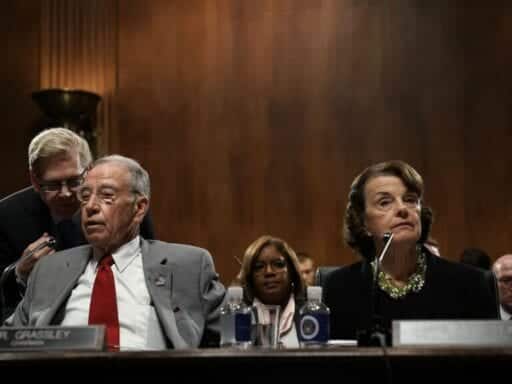 Republicans, meanwhile, are attacking how the allegations have been disclosed.

Senate Democrats are calling for Supreme Court Nominee Brett Kavanaugh’s confirmation to be delayed after California professor Christine Blasey Ford came forward as the woman accusing him sexual assault. Republicans, however, haven’t yet indicated whether they intend to continue with Kavanaugh’s upcoming vote as planned.

In an interview with the Washington Post published on Sunday, Ford alleged that Kavanaugh drunkenly pinned her down and sexually assaulted her when they were both teenagers in the 1980s. She initially wanted to remain anonymous out of fear of retaliation and public attacks but ultimately decided “my civic responsibility is outweighing my anguish and my terror about retaliation.”

Kavanaugh’s Senate Judiciary Commitee confirmation hearing already took place in early September, where senators questioned him about his record, beliefs, and past for days. The sexual assault allegations, which Ford raised in a confidential letter to Sen. Dianne Feinstein (D-CA) in July, came out just this week.

The panel is scheduled to vote on Kavanaugh’s nomination on Thursday, Sept. 20. In response to the allegations last week, but before Ford’s identity was revealed, Senate Judiciary Chairman Chuck Grassley (R-IA) had his office publish a letter signed by 65 women Kavanaugh knew in high school saying he “treated women with respect.”

After the Post’s story broke on Sunday, reactions poured in from the senators who will ultimately decide whether Kavanaugh, President Donald Trump’s second Supreme Court nominee, will be confirmed — at least on the Democratic side. Senators on the left called for the nomination to be slowed down until an investigation to be conducted; Republicans were slower to respond, but a few hinted they were determined to continue on as planned.

Feinstein, the ranking member of the judiciary committee who who kept Ford’s identity confidential but did submit her allegation to the FBI, said that the professor’s decision to come forward was “extraordinarily difficult” in a statement. She also said the bureau should investigate her claims before the Senate moves forward with Kavanaugh’s nomination.

“From the outset, I have believed these allegations were extremely serious and bear heavily on Judge Kavanaugh’s character. However, as we have seen over the past few days, they also come at a price for the victim,” she said. “I hope the attacks and shaming of her will stop and this will be treated with the seriousness it deserves.”

Sen. Kamala Harris (D-CA), a member of the Senate Judiciary Committee, called for a delay until there is an investigation as well, citing the Senate’s “constitutional responsibility” to scrutinize Supreme Court nominees. So did Sen. Mazie Hirono (D-CA), also on the committee, and multiple other Senate Democrats and judiciary committee members.

Christine Blasey Ford courageously stepped forward to tell her story — it is a credible and serious allegation. The Senate has a constitutional responsibility to scrutinize SCOTUS nominees. A vote on Kavanaugh’s nomination must be delayed until there is a thorough investigation.

As I said during the hearing, this is why the #MeToo movement is so important, because often in these situations, there is an environment where people see nothing, hear nothing, and say nothing. That is what we have to change.

This is the most important Supreme Court vacancy in a generation, and President Trump has chosen Judge Kavanaugh to be the decisive vote on the health, privacy, and rights of all Americans, and whether our Constitution will protect everyone or just the wealthy and powerful.

Sheldon Whitehouse: “Kavanaugh’s blanket denial cannot be reconciled with her specific recollections, and the FBI needs time to take proper witness statements. Lying to an FBI agent in a formal interview is a crime, and an impeachable offense.” https://t.co/4S8JOV98El pic.twitter.com/Ha8LR06h8q

Senate Minority Leader Chuck Schumer (D-NY) in a statement also called for a postponement of the vote on Kavanaugh. “To railroad a vote now would be an insult to the women of America and the integrity of the Supreme Court,” he said.

Alabama Democratic Sen. Doug Jones before Ford’s identity was revealed on Sunday predicted Kavanaugh’s nomination would likely move forward in an appearance on CNN’s State of the Union — unless the accuser was revealed. “There’s really not much that can be done unless this person comes forward and you can see this and talk to the person who wrote that letter,” he said. After Ford came forward, he called for a delay in the nomination.

Republicans have been slower to weigh in

While a chorus of Democratic lawmakers quickly rose up, Republicans in the Senate and the administration were quieter.

One of the few immediate responses came from Taylor Foy, the communications director for Grassley on the Senate Judiciary Committee, who took a swipe at Senate Democrats for keeping Ford’s allegations under wraps and suggested they were politically motivated to do so. In a statement Foy said the “uncorroborated allegations from more than 35 years ago” are “disturbing.” (Ford did not tell anyone about the alleged incident when it first happened in the 1980s, but she discussed it in therapy in 2012 and 2013 without naming Kavanaugh, and her therapists’ notes from the time corroborate that.)

“Judge Kavanaugh’s background has been thoroughly vetted by the FBI on six different occasions throughout his decades of public service, and no such allegation ever surfaced,” Foy said.

South Carolina’s Lindsey Graham said in a statement that he agreed with the committee’s concerns about the “substance and process” of the allegations but said he would “gladly listen” to Ford to hear what she has to say. “If the committee is to hear from Ms. Ford it should be done immediately so the process can continue as scheduled,” he said.

My statement on Judge Kavanaugh. pic.twitter.com/QGz3uUyzC9

Republican Sens. Susan Collins of Maine and Lisa Murkowski of Alaska, considered to be the two swing votes in Kavanaugh’s confirmation, have yet to publicly comment. Many of their fellow GOP lawmakers have thus far held off as well.

It’s not clear whether Ford coming forward has changed his calculation.

The White House has not yet put out a statement beyond reiterating Kavanaugh’s denial when contacted by the Post. The FBI, which handles background checks on government appointees, had previously said it added Ford’s original letter to Kavanaugh’s file, meaning the White House and other senators will be able to review it, and a spokeperson said they had no other guidance to provide.

White House spokespeople did not return request for comment. A lawyer close to the administration told Politico there was no way the nomination would be withdrawn. “If somebody can be brought down by accusations like this, then you, me, every man certainly should be worried,” the lawyer said.

A lawyer close to the White House said the nomination will not be withdrawn. “No way, not even a hint of it. If anything, it’s the opposite. If somebody can be brought down by accusations like this, then you, me, every man certainly should be worried.” https://t.co/aAbYbNVgNj

One year after #BlackoutTuesday, what have companies really done for racial justice?
Beethoven’s 5th Symphony is a lesson in finding hope in adversity
Trump finally uses the Defense Production Act to make ventilators. But that might not solve the prob...
Trump used his latest coronavirus briefing to push a bizarre lie about the deficit
Why staying cold is so important to a Covid-19 vaccine
Facebook and Twitter said they would crack down on QAnon, but the delusion seems unstoppable