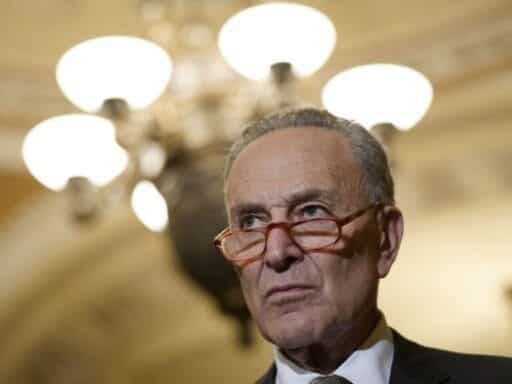 Chuck Schumer has sent a letter to Mitch McConnell about how Democrats prefer to approach the trial.

Senate Minority Leader Chuck Schumer laid out exactly how Democrats are looking to handle the Senate impeachment trial in a letter on Sunday: They’d like to kick things off on January 6 — and include the testimony of at least four witnesses.

Those witnesses are acting White House Chief of Staff Mick Mulvaney, former National Security Advisor John Bolton, Mulvaney’s senior advisor Robert Blair, and Associate Director for National Security at the Office of Management and Budget Michael Duffey. They’re all current or former members of President Donald Trump’s administration who have direct knowledge of his discussions with Ukraine about political investigations and military aid. All four were called to testify as part of the House inquiry, though they declined to show up.

“There will be no difference between the president’s position and our position as to how to handle this to the extent that we can,” McConnell said during a Fox News appearance last week. Senate Republicans have emphasized that they’re interested in an expedited process that doesn’t include witnesses and moves quickly to acquittal. Democrats, it seems, want something slightly different.

Schumer’s letter is coming at a crossroads: Since the House is expected to impeach the president this Wednesday, an impeachment trial is likely to begin in the Senate at the start of the new year. Before it gets underway, however, the Senate will have to vote on a rules resolution that’s historically been hashed out by the majority and minority leaders regarding the timing of the trial, daily procedure, and possible witnesses. During former President Bill Clinton’s trial, the Senate voted 100-0 on a broad rules motion around procedure, though it split along party lines regarding a later motion to call witnesses.

In his letter to McConnell, Schumer explains what he envisions the rules resolution looking like for the Trump trial, including the schedule of the proceedings, the witnesses he’s interested in subpoenaing, and the documents he’d like to request from the White House. He notes that, unlike in the Clinton trial, Democrats are interested in one resolution that includes provisions governing all three issues.

“We believe all of this should be considered in one resolution,” he writes. “The issue of witnesses and documents, which are the most important issues facing us, should be decided before we move forward with any part of the trial.”

Democrats’ take on resolution would address the following:

Start of the trial

Subpoenas for witnesses and documents

Schumer also notes that Democrats will welcome additional witness requests from the White House, as long as the people being called have “direct knowledge of the Administration’s decisions regarding the delay in security assistance funds to the government of Ukraine and the requests for certain investigations to be announced by the government of Ukraine.” The letter does not explicitly comment on whether Democrats would oppose other potential witnesses Republicans have called to hear from throughout the impeachment process, like former Vice President Joe Biden’s son, Hunter Biden.

In addition to witness testimony, Democrats are seeking a trove of documents that “shed additional light on the Administration’s decision-making regarding the delay in security assistance funding to Ukraine and its requests for certain investigations to be announced by the government of Ukraine.” House Democrats sought similar documents during their inquiry into Trump’s relationship with Ukraine; the White House refused to turn these documents over — and it’s not yet clear whether they’d react differently during the Senate trial.

McConnell and Schumer have said they’d like to find bipartisan agreement on the rules governing the trial, but lawmakers on both sides of the aisle have wondered if that will be possible given how polarized this impeachment process has become.

If Republicans are able to stay united, they could approve a more partisan version of the rules with just 51 votes. This letter is Democrats’ attempt to emphasize their own priorities.

Democrats have a very narrow path left to win back the Senate
Hong Kong’s pro-democracy lawmakers quit en masse. One explains why.
A brief history of beards and pandemics
Romney just urged Republicans to stop entertaining Trump’s election lies
The Lost Year: A dad, his son, and the bittersweet realization of life’s true priorities
There’s a good chance you’ve waived the right to sue your boss