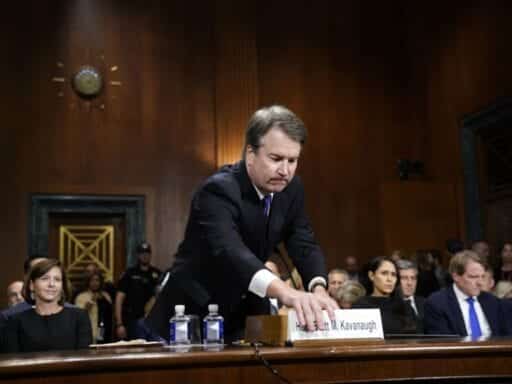 Sen. Jeff Flake is arguing for a one week delay on the floor vote.

The Senate Judiciary Committee has voted 11-10 along party lines to advance Brett Kavanaugh’s Supreme Court nomination and send him to the floor for a full Senate vote. The panel’s approval brings Kavanaugh one step closer to confirmation for the high court — something he had previously appeared on track to achieve, despite an explosive hearing on sexual assault allegations against him that took place Thursday.

It didn’t come without a major wrinkle, however. Sen. Jeff Flake of Arizona — a pivotal Republican swing vote — argued on Friday for a delay on the floor vote on Kavanaugh’s Supreme Court nomination for up to one week. “I think we ought to do what we can to do all our due diligence for a nomination this important,” Flake said at a committee meeting on Friday. He said he would advance the nomination to the floor with this understanding.

Kavanaugh’s nomination will next be considered by the entire Senate, where Republicans have a narrow 51-49 majority. Senate Majority Leader Mitch McConnell has set up an aggressive timeline for Kavanaugh’s confirmation, hoping to have it squared away by the Supreme Court’s fall term, which begins on October 1. While it doesn’t look like the vote is going to take place quite that early, consideration of Kavanaugh’s nomination was previously set to hit the floor on Saturday, when the Senate was set to take a procedural vote.

Due to procedural rules and an expected debate on his nomination, that meant he likely wouldn’t get a vote from the full Senate until next Monday or Tuesday. It’s unclear whether this timing is still in place.

It’s a schedule that’s dependent on whether McConnell listens to Flake, who’s said he would only be comfortable with moving the vote on the floor if the FBI conducts a further investigation into the sexual misconduct allegations against Kavanaugh.

All eyes also remain on moderate Republican Sens. Susan Collins (ME) and Lisa Murkowski (AK) — both of whom could still contribute to blocking the nomination, though they’ve yet to signal whether they plan to do so. Given Republicans’ very slim Senate majority, if the 49 members of the Democratic caucus remain united (by no means a sure thing) and two Republicans join with them, it’s possible they could sink Kavanaugh’s nomination. If just one Republican senator flips, Vice President Mike Pence could vote to break the tie.

The committee vote took place following Thursday testimony from Christine Blasey Ford, a Palo Alto University professor who’s accused Kavanaugh of pinning her down and trying to force himself on her when they were both in high school. Ford detailed her recollection of the assault in a series of raw and emotional statements in front of the panel on Thursday. Two other women, Deborah Ramirez and Julie Swetnick, have also accused Kavanaugh of sexual misconduct and assault, dating back to his high school and college days. Kavanaugh has unequivocally denied all allegations and continued to do so.

Senators will continue to weigh their testimony — and Kavanaugh’s record — as consideration of his nomination proceeds.