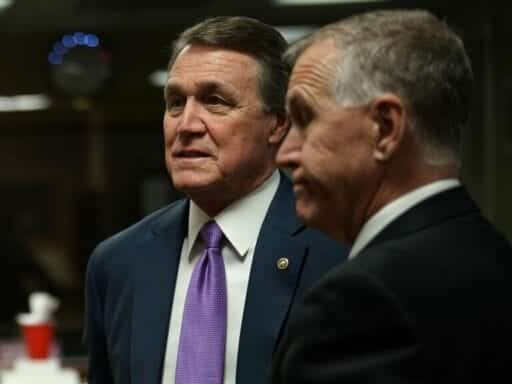 US Sens. David Perdue (R-GA) (L) and Thom Tillis (R-NC) wait for the beginning of a news conference on immigration on February 12, 2018, at the Capitol in Washington, DC. | Alex Wong/Getty Images

While some Republicans went after the whistleblower, others left town claiming they still hadn’t read the report.

Senate Republicans have a new strategy to deflect allegations of election interference that have been brought against President Donald Trump: They’re questioning the credibility of the whistleblower.

“What’s concerning to me is it’s based upon secondhand and third-hand reports … so you got to get more facts behind it,” Sen. Chuck Grassley (R-IA) told Vox.

It’s true that much of the information that was gathered by a whistleblower was based on secondhand accounts. But a large portion of the report — at least pertaining to what Trump said on a July call with Ukranian President Volodymyr Zelensky — has already been corroborated by the White House itself.

The allegations centering specifically on requests that Trump made of Zelensky during the call, for example, match up neatly between the whistleblower account and the administration’s own summary.

A statement from Trump-appointed Intelligence Community Inspector General Michael Atkinson, who deemed the complaint both urgent and credible, also rebuts attacks on the whistleblower.

Other allegations, like the White House’s attempts to cover up Trump’s conversation with Zelensky, don’t have further public corroboration at this point.

A whistleblower with second hand information? Another Fake News Story! See what was said on the very nice, no pressure, call. Another Witch Hunt!

Clearly, the main messaging from the administration is aimed at casting doubt on the whistleblower, and Senate Republicans aren’t shy about following suit.

“First of all, he’s not a whistleblower,” Sen. David Perdue (R-GA), a close Trump ally, told reporters on Thursday. “He wasn’t in the room, he wasn’t on the phone call.”

“After reviewing both the transcript and the complaint, it’s clear that Democrats are desperately attempting to use secondhand information to launch false attacks against President Trump and justify their effort to impeach him,” Sen. Thom Tillis (R-NC) added, in an exchange with HuffPost’s Igor Bobic.

Senate Republicans, for now, continue to serve as one of Trump’s most crucial lines of defense. While the Senate is not involved in bringing articles of impeachment, it would be the “court” where these charges are ultimately heard if the process advances further.

Based on the reactions from many members of the caucus, they aren’t in any rush to confront his behavior. Although multiple lawmakers were interested in learning more “facts” about the complaint, most stopped short of definitive condemnations. Additionally, several claimed they had not yet read the report, even as the Senate prepared to leave for a two-week recess.

As more details emerge centering on the complaint, it’s clear Republicans will have to navigate the specific actions it details in order to mount a more serious response.