Senators are slamming Trump’s Putin meeting, but they aren’t going to do anything about it 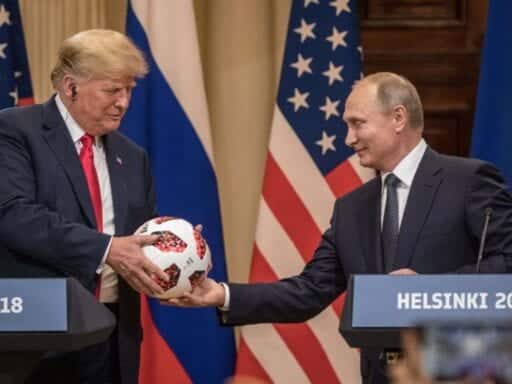 Ideas have been floated, but consensus seems unlikely.

Democrats and Republicans agree that something needs to be done about Russia in the wake of this week’s shocking Trump-Putin summit and the president’s baffling subsequent walkback of his comments. But few can agree on what exactly that should be, which probably means any efforts are doomed to failure.

So far, members of both parties have widely condemned Trump’s press conference on Monday and expressed support for a hearing with Secretary of State Mike Pompeo.

“There’s a possibility we may well take up legislation related to this,” Senate Majority Leader Mitch McConnell said of a bill addressing sanctions from Sens. Marco Rubio (R-FL) and Chris Van Hollen (D-MD) during his weekly Tuesday press briefing. This bill is also among the measures that Senate Minority Leader Chuck Schumer backed on Tuesday.

It’s unclear, however, how far this collective outrage will stretch. In addition to the Rubio-Van Hollen bill, multiple measures have been proposed to address the issue of Russian election interference, and it remains to be seen whether any have the full-throated support they need to ultimately pass.

Sen. Mark Warner, the top Democrat on the Intelligence Committee — which is conducting its own investigation into Russian interference — says that lawmakers are still parsing the best way forward.

“That’s what we’re trying to work on. There’s questions around resolutions, although a Senate resolution — 98-2, I believe, reinforcing NATO — that didn’t carry a lot of weight with Trump,” Warner said. “We’re kind of in uncharted territory where we’ve got someone that is acting so irresponsibly in a way that’s got so many national and international consequences that Congress has to act to, in a sense, restrain this president’s flexibility because we can’t trust what he says or what he does.”

While a Senate Foreign Relations Committee hearing with Pompeo is now on the books — and keenly backed by both Democrats and Republicans — it’s unclear what other concrete measures addressing Russian interference will gain momentum. (This hearing is dedicated to scrutinizing the administration’s broader approach to Russia, with Democrats particularly interested in the one-on-one portion of the Trump-Putin meeting.)

A growing number of lawmakers have floated ideas for measures that would address Russian meddling.

Sen. Jeff Flake (R-AZ) on Monday indicated interest in a resolution that would reiterate support for special counsel Robert Mueller’s investigation into Russian election interference and emphasize congressional confidence in the 12 indictments that were recently issued. “I think we should pass a resolution on the heels of all this,” Flake said, per the Hill.

“I have legislation to name Russia a state sponsor of terror. I’d like to see that legislation passed,” said Sen. Cory Gardner (R-CO) on Tuesday. “I’m going to be pursuing that and push back any way I can.” Gardner’s bill, which is co-sponsored by Sen. Bob Menendez (D-NJ), calls on the State Department to evaluate how Russia is classified.

Rubio and Van Hollen’s bill, which was name-checked by both McConnell and Schumer, has been picking up some buzz. It would impose rapid sanctions on Russia if the director of national intelligence determined that it had interfered in US elections again.

When asked whether lawmakers would be able to collectively get behind one single measure, Gardner pointed out that many of these bills already boast bipartisan sponsorship. Menendez also said he was optimistic about Republicans supporting a legislative effort on the issue.

“It is my sincere hope that they will, because it’s a time for patriotism over partisanship,” he said. “If Barack Obama had done what President Trump did during the summit, I would be peeling them off the ceilings.”

Bipartisan backing will be pivotal for any legislation to advance, notes Sen. Jeff Merkley (D-OR), a member of the Foreign Relations Committee who supports the Rubio-Van Hollen bill as well as legislation from Sens. Amy Klobuchar (D-MN) and James Lankford (R-OK) that addresses cyberthreats to election infrastructure.

“I think we need a powerful bipartisan bill that tells Russia if they mess with our elections again, we’re going to be imposing lots of damaging strategies against them,” Merkley said. McConnell hasn’t exactly made a strong commitment to ensuring that happens.

Trump keeps creating problems like this, and Congress has struggled to solve them

Trump’s unwillingness to forcefully denounce Putin — despite his attempt to halfheartedly ameliorate the situation on Tuesday — is just the latest instance of the president putting the onus on Congress to address a problem he exacerbated. Much like the DACA fight and the recent family separation debacle, Trump’s actions are ratcheting up the pressure on legislators.

Also much like those fights, this is another policy area in which Congress could get mired in both procedural complications and disagreement about how best to address the problem — resulting in little actual action.

As Rubio himself told Politico, his bill might be racking up support, but it could be a while before it winds its way to the floor. “Once the Supreme Court nomination gets going, it’s going to be difficult,” he said.

Bill Barr’s Justice Department swings into action to undercut the inspector general report
Pope Francis’s mass in the United Arab Emirates was historic — and complicated
Who will get the Covid-19 vaccine first? A CDC advisory panel just weighed in.
How fast food “became black”
The only remaining check on Trump is the 2020 election
Trump supporters’ last-ditch downtown DC election protests got off to a bleak start