Serena Williams had to manage other people’s feelings about her. Again. 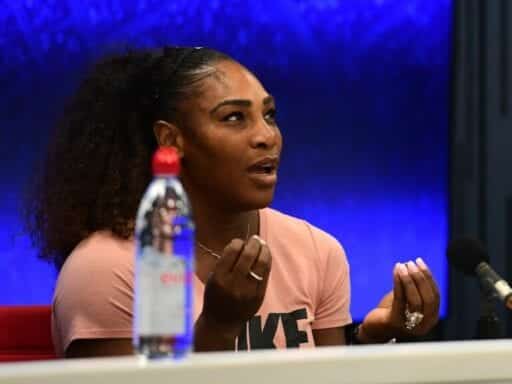 Serena Williams and Naomi Osaka played a devastating match. Then they had to deal with everyone else’s emotions.

During the trophy ceremony for the women’s final of the 2018 US Open on Saturday, the new champion Naomi Osaka began to cry.

Serena Williams, who had just been defeated after a series of penalties she believed a male athlete never would have incurred, put her arm around Osaka. She whispered something in her former adversary’s ear. Beneath Osaka’s visor were the beginnings of a smile.

In that moment, the two showed more grace and respect than many commenting on the match, which became yet another referendum on Williams, whose every move is scrutinized in a way that’s inextricably tied to her gender and her race. Later, as the audience jeered during the trophy ceremony, Williams urged the crowd to support Osaka. “Let’s give everyone the credit where credit’s due and let’s not boo anymore,” she said.

The ceremony was an example of what Williams and many other highly visible women, in sports and beyond, have to contend with every day. It’s not enough for Williams to be one of the best athletes in the world, mere months after nearly dying after giving birth to her daughter. She has to deal with sexist and racist judgment of the way she expresses her emotions, while working to manage the emotions of everyone who watches her play.

Williams and Osaka talked down the crowd gracefully

Earlier that day, Williams had sustained a series of penalties — for getting coaching from the sidelines (a charge she disputed), for throwing her racket, and for arguing with an umpire — that ultimately cost her a game. She had questioned the motivation behind the calls, saying to a referee, “There are men out here that do a lot worse.”

“Because I’m a woman, you’re going to take this away from me?” she asked. “That is not right.”

Williams had faced yet another example of what looked like unfair treatment, coming after the years of sexism and racism she’s faced from media and audiences alike. She had seen the dream of a 24th Grand Slam title, which would have been the first since the birth of her daughter Alexis Olympia and her recovery from a life-threatening blood clot, slip away. And then she had to stand up and accept the finalist trophy in front of a crowd whose boos and shouts could do nothing to restore what she felt was stolen from her.

Osaka, meanwhile, had just played against her childhood role model, the athlete whose performance on the court made her say, “I want to be like her,” according to the New York Times. She may have won, but she’d lost the chance to truly measure her skills against Williams, and to triumph without questions swirling around the victory. And then she had to stand up and accept her prize — her first Grand Slam singles trophy, and the first for any player born in Japan — in front of a booing crowd who’d wanted someone else to win.

In that moment, both faced a task nearly as difficult as the game itself: Given an outcome neither of them wanted, the opponents had to come together and respond with dignity and honor to the outrage of the crowd. They didn’t disappoint.

Asked for her perspective on the match, Williams instead turned attention back to Osaka. “She played well, and this is her first Grand Slam,” Williams said, her voice breaking.

“Let’s make this the best moment we can,” she urged the crowd. “Let’s give everyone the credit where credit’s due and let’s not boo anymore. We’re going to get through this and let’s be positive, so congratulations, Naomi!”

The announcer then turned to Osaka with a question that, under the circumstances, felt almost cruel. Given her dream to face Williams one day, he asked, “how does the reality compare with the dream?”

Osaka politely ducked the question. Then she essentially apologized to the crowd for winning. “I know that everyone was cheering for her and I’m sorry it had to end like this,” she said. “I just want to say thank you for watching the match.”

Later, in a news conference, Williams held her ground, refusing to express regret for behavior she felt would have been acceptable in a man. “The fact that I have to go through this is just an example for the next person that has emotions and that wants to express themselves, and they want to be a strong woman,” she said. Then she looked to the future: “They’re going to be allowed to do that because of today. Maybe it didn’t work out for me but it’s gonna work out for the next person.”

The focus on Williams’s “rant” has been misplaced

In the wake of Williams’s loss, much media coverage chastised her — or outright insulted her — for letting her emotions get the better of her on the court. The Telegraph called her argument with officials a “furious rant.” Multiple outlets referred to her “outburst.” Josh Billinson, editor of the Independent Journal Review, noted that while the New York Post called Williams’s argument with officials the “mother of all meltdowns,” similar behavior by the Yankees’ Aaron Boone was just “arguing a strike”:

I guess sometimes it’s a meltdown and other times it’s just arguing a strike ‍♂️ pic.twitter.com/I3ZyxBMzGT

Mark Knight, the editorial cartoonist for the Herald Sun, an Australian newspaper, has been criticized for a racist and sexist cartoon in which a wildly caricatured Williams stomps on her racket while the umpire asks her opponent, “Can’t you just let her win?”

Certainly, Williams did throw her racket and argue with an official. But as she has pointed out, that’s nothing her male peers haven’t done.

“We watch the guys do this all the time,” Katrina Adams, head of the United States Tennis Association, told the BBC. “There’s no equality when it comes to what the men are doing to the chair umpires and what the women are doing, and I think there has to be some consistency across the board.”

And lost in all the criticism of Williams’s “meltdown” has been the role of chair umpire Carlos Ramos. At the New York Times, David Waldstein cast Ramos as a stoic: Williams “demanded that Ramos apologize to her and make an announcement to the crowd that she was not receiving any coaching,” he writes. “Ramos, known for his no-nonsense approach, did not relent.”

In this telling of the match, Williams is demanding and Ramos is strong and rational, holding firm against Williams’s “nonsense.”

But former tennis star Billie Jean King, writing at the Washington Post, has a different take. In docking Williams a game, Ramos “made himself part of the match,” she writes. “He involved himself in the end result. An umpire’s job is to keep control of the match, and he let it get out of control. The rules are what they are, but the umpire has discretion, and Ramos chose to give Williams very little latitude in a match where the stakes were highest.”

Many critics of Williams, both after the match and long before, have cast her as a narcissist who makes everything about her. But King asserts Ramos made the match all about him. And whatever you think about his call, it’s undeniable that Williams and Osaka had to pick up the pieces, soothing the angry crowd and maintaining professionalism in difficult circumstances beyond their control.

It’s an all-too-familiar position for Williams, who constantly has to contend not just with her opponents on the court but with the whole world’s feelings about her.

“Imagine that you have to contend with critiques of your body that perpetuate racist notions that black women are hypermasculine and unattractive,” wrote Claudia Rankine in her 2015 New York Times Magazine profile of Williams. “Imagine being asked to comment at a news conference before a tournament because the president of the Russian Tennis Federation, Shamil Tarpischev, has described you and your sister as ‘brothers’ who are ‘scary’ to look at.”

Sometimes, the feelings she has to deal with even come from her fellow players — as Nadra Nittle of The Goods notes, Anna Kournikova reportedly once said, “I’m not Venus Williams. I’m not Serena Williams. I’m feminine. I don’t want to look like they do. I’m not masculine like they are.”

Williams wouldn’t be the first powerful woman to be forced to manage other people’s emotions as part of doing her job. As Joan C. Williams, director of the Center for WorkLife Law at the University of California Hastings College of Law, wrote in the Washington Post in 2014, women are constantly negotiating the competing demands that they present themselves as feminine but not too feminine. Their solution: “Powerful women often take feminine stereotypes that can hold women back — the selfless mother and the dutiful daughter, for example — and use those stereotypes to propel themselves forward.”

As Williams points out, if you see a successful woman, you should probably assume she’s spent a lot of time managing other people’s reactions to get where she is. And Williams has to manage those reactions on a world stage, while remaining a role model for Osaka and other young female athletes who come after her.

It’s ironic, then, that the focus in the immediate wake of the US Open has been on Williams’s emotions — her “meltdown,” her “rant.” If anything, what Williams’s performance on Saturday showed us — indeed, what her entire career has shown us — is how emotional other people are about Serena Williams, and how hard she has to work to deal with that.