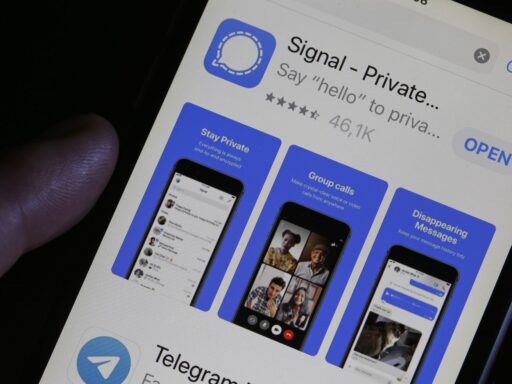 The encrypted messaging app is currently the most downloaded app on both app stores.

Signal, once a niche messaging service for the privacy-minded, is currently the most downloaded app in the United States, unseating perennially popular social media and gaming apps. Its newfound popularity is due to a convergence of reasons, including WhatsApp’s changing policies, violence at the Capitol that led many tech companies to deplatform Trump, and a viral tweet from the world’s wealthiest man.

On January 7, Tesla founder Elon Musk tweeted “Use Signal” and sent the valuation of the wrong company, tiny health care technology firm Signal Advance, beyond its wildest expectations. Musk had been referring to the unrelated encrypted messaging outfit, which also benefited immensely from the tweet.

Signal, for the first time, became the most downloaded app on the App Store and Google Play following Musk’s tweet, a position it has maintained for a week. The sudden growth caused widespread outages on January 15, as the company struggles to add extra server capacity for the record number of new users.

The tweet came a day after Musk had tweeted a meme blaming Facebook for its role in the violent storming of the Capitol, in which Trump supporters, amped up on conspiracy theories about a stolen election, failed to stop Congress from certifying Joe Biden’s election victory. The meme illustrates the “domino effect” from Facebook’s beginnings as “a website to rate women on campus” to the Capitol being “under the control of a man in a viking hat.”

This is called the domino effect pic.twitter.com/qpbEW54RvM

A few days earlier on January 4, Facebook-owned WhatsApp had issued a new privacy policy, which many interpreted would mean users would be required to share personal information with Facebook’s ad network in order to use the platform. Facebook has clarified that WhatsApp messages will remain encrypted and personal information like contacts would not be shared with Facebook. Still, many users — goaded in part by Musk’s tweet — flocked to other encrypted messaging apps like Telegram (now No. 2 in the App Store) and Signal (now No. 1).

But as influential as Musk is, he isn’t tweeting in a vacuum. Signal’s growth in popularity also came as numerous tech companies, including Facebook and Twitter, began deplatforming Trump and his followers and trying to prevent their technologies from being used in service of further violence. Parler, the right wing’s social media alternative, was also booted from the internet; Google and Apple banned it from its app stores and Amazon Web Services stopped hosting the app on its servers.

Signal, typically praised by privacy proponents and left-wing activists, is topping the app stores along with other privacy-focused social media alternatives like MeWe. It’s unclear how much the shift to these apps is being buoyed by people from the fringe right in need of new places to communicate. Because of the encrypted nature of the app, it’s hard to know (more on that below).

Previously, the number of new Signal users has rocketed up following social or political unrest. Signal downloads spiked after the election of Donald Trump, who rolled back a number of privacy protections. Downloads also grew during Black Lives Matter protests against police violence last spring, as activists strove to organize while staying safe from law enforcement.

“Due to the nature of social apps and how the primary functionality involves communicating with others, their growth can often move quite quickly, based on current events,” Amir Ghodrati, director of market insights at App Annie, told Recode.

The mobile data and analytics provider said demand for privacy-focused messaging apps has grown in the last few years, as internet privacy becomes a more mainstream issue and as people spend more time — 67 percent more time on average in the first half of 2020 — in messaging apps than on social media apps.

Signal is an end-to-end encrypted communications app, available for mobile and desktop. That means users can send texts or make phone or video calls without outsiders — or the platform itself — seeing the content of those messages. Intercepted messages would look like a string of garbled text and symbols.

Founded in 2014 by an enigmatic software engineer, “white hat” hacker and anarchist thinker Moxie Marlinspike, Signal is developed by a nonprofit, which means it’s unlikely to be acquired by, say, a big tech company. And unlike big tech companies, the service doesn’t sell ads or user data. It’s supported by donations, including a $50 million loan from its co-founder, Brian Acton, who also created WhatsApp. WhatsApp is encrypted using Signal’s protocol and was acquired by Facebook in 2014. Critics have worried that WhatsApp’s ownership by Facebook makes it less secure than Signal.

Signal’s software is open sourced, so others can download or copy it. The founders’ mission is for end-to-end encryption to become commonplace, even to the point where Signal isn’t necessary.

“If we’ve pushed the envelope as far as we can go and the things we develop become as ubiquitous as possible, we could all focus on other things,” Marlinspike told the New Yorker in a profile in October.

While Signal has its downsides, including the fact that it notifies users every time a new contact gets the service and that you can only communicate securely if others have the app, it’s generally considered to have good enough privacy for regular people. That is, it’s easy to use and generally secure. More secure programs require jumping through more hoops.

Signal is more geared at direct communication rather than the broad communication of social media, though recently increased its group call limit from five to eight users and its group chats top out at 1,000 users. The company has also been rolling out new features like wallpaper and animated stickers. This summer, it released a tool that would automatically blur faces, so people could, say, share videos of protests without identifying the protesters.

It’s possible that Signal’s most recent surge has been propped up by protesters — this time those on the right. As social media companies are taking a more active stance on what’s allowed on their platforms after the violent Capitol riots, it makes sense that those searching for new platforms would turn to ones in which their communications are kept secret.