Some US airports are seeing huge, chaotic crowds for coronavirus screening 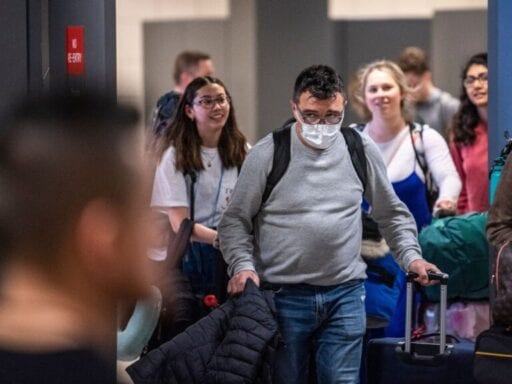 Travelers returning to the US from Europe following President Donald Trump’s announcement of European travel restrictions to combat the coronavirus are reporting long lines, massive crowds, and confusing announcements in major airports across the US.

The scenes of chaos illustrate how the federal government — which has jurisdiction over customs and is in charge of screening arrivals from abroad for signs of illness — is struggling to administer new protocols efficiently. And public health experts argue the dense crowds is a serious health hazard, and one that could accelerate the spread of coronavirus.

Trump announced a 30-day ban on travelers coming to the US from 26 European countries that went into effect on Friday at midnight. He announced Saturday Ireland and the United Kingdom would be added to the ban as well. American travelers, legal permanent residents, and family members of either category are exempt from the ban, but concerns about more stringent lockdowns on travel both in the US and in Europe — where countries like Italy and Spain are undergoing sweeping quarantines — have compelled many people abroad to return to the US.

Travelers returning to the US from banned European countries, China, and Iran are now required to travel through 13 airports for an enhanced screening process, one meant to ensure they have not become infected with the coronavirus. But the screening process isn’t going smoothly everywhere.

For example, international travelers were caught in huge crowds in Chicago’s O’Hare International Airport on Saturday as they awaited health inspections. Some people reported being stuck in lines for up to seven hours.

This is the horde of people awaiting health inspections after international flights into @fly2ohare in Chicago. A social-distancing nightmare! (Shared with me by someone in Chicago) pic.twitter.com/hOywwvaWR8

Photos of the crowds went viral, and prompted criticism from concerned public health officials and politicians.

“The crowds & lines O’Hare are unacceptable & need to be addressed immediately,” tweeted Illinois Gov. J.B. Pritzker. “The federal government needs to get its [email protected]#t together. NOW.”

O’Hare officials acknowledged that the delays were due to longer screening processes. “[C]ustoms processing is taking longer than usual inside the Federal Inspection Services (FIS) facility owing to enhanced #COVID19 screening for passengers arriving from Europe,” a statement posted to the airport’s Twitter account read.

Jeremy Konyndyk, a senior policy fellow at the Center for Global Development who specializes in global outbreak preparedness, described the scene at O’Hare and other airports as very worrying.

“Good God. You could hardly invent a better scenario for superspreading events,” Konyndyk tweeted. “Any cases of COVID in these crowds will have a far higher chance of spreading to others in these lines than if they were just allowed in unchecked.”

At Dallas/Fort Worth International Airport, travelers tweeted out photos of long, winding lines at customs and local reports indicated that the airport was taking inadequate steps to protect staff and travelers from increased risk of infection.

#BREAKING: Passengers stuck in long lines for immigration at @DFWAirport tell us there are no offers of hand sanitizer, gloves, or masks from U.S. Customs / Immigration. Travelers say they’ve had no screenings of temp yet and no one following #coronavirus protocols. pic.twitter.com/9viCnWdncz

Paige Hardy, an American graduate student who landed in Dallas, told the New York Times that confusing announcements on her plane caused alarm among passengers and that delays caused her to miss a connecting flight. “It truly felt like an apocalyptic scenario,” she told the Times.

Carl T. Bergstrom, a biology professor as the University of Washington, tweeted that big crowds in airports were “a perfect storm for creating massive case clusters.”

Europe is now the “epicenter of the pandemic”

A large part of the concern over these crowds are that the travelers are coming form an area that has seen a growing number of confirmed coronavirus cases in recent weeks, putting them at risk — and depending on where they were, perhaps significant risk — of exposure. Just last week the World Health Organization declared Europe the center of the coronavirus crisis.

“Europe has now become the epicenter of the pandemic, with more reported cases and deaths than the rest of the world combined, apart from China,” said WHO Director General Tedros Ghebreyesus at a news conference on Friday. Italy and Spain have been the hardest hit, but many other European countries including Germany and France have seen a spike in reports and are taking steps to impose social distancing on their populations.

Dr. Anthony Fauci, director of the National Institute of Allergy and Infectious Diseases and a member of the White House coronavirus task force called the crowds “not helpful” on CNN’s State of the Union Sunday, saying that while he understands concerned Americans are eager to get home, he’d like them to remember that Americans will not be have their entry barred: “You don’t need to get back right now, you can pace getting back,” he said.

The Department of Homeland Security said that as of Friday, passengers will be given enhanced entry screenings which include being asked about their medical history, current condition, and contact information for local health authorities. The passengers are also being given “written guidance about Covid-19” and directed to home-quarantine.