Sucking CO2 out of the atmosphere, explained 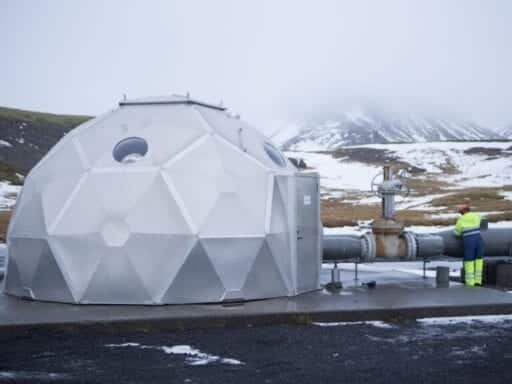 Climate change has backed us into a corner. Scientists say we have remove greenhouse gases from the atmosphere.

The best time to start the fight against climate change was 20 years ago. The second best time is right now. And since we’re so far behind, we have no option other than to try to roll the clock back and clean up the mess we’ve made.

In its most recent assessment, the Intergovernmental Panel on Climate Change (IPCC) reported that we may have as little as 12 years to cut our greenhouse gas emissions in half compared to today’s levels to limit average global warming to 1.5 degrees Celsius, a benchmark to avoid some of the worst impacts of climate change. It also reports that every scenario for doing this requires pulling carbon dioxide out of the air, also known as “negative emissions.”

Either way, it means that carbon removal is no longer just a potential strategy for fighting climate change. Given the very high likelihood we will overshoot our emissions reduction targets, carbon removal is now an absolute necessity for avoiding worst-case scenarios.

The good news is we already know how to bring carbon back down to earth, from smart land management to high-tech plants that capturing it straight from the air. In fact, nature already soaks up almost one-third of the carbon dioxide we emit.

The big question is how we can ramp up everything we have to a meaningful scale in time.

Just in time, the National Academies of Sciences, Engineering and Medicine put out a new report Wednesday on the state of carbon dioxide removal technologies. The report found that we already have four methods ready for large-scale deployment at a cost of $100 per ton of carbon dioxide or less. Going forward, the report argues, the US needs more testing of these existing options and to ramp up research into new ways to capture carbon.

However, it notes, the world likely won’t be able to remove enough carbon dioxide with these technologies alone to limit warming to 1.5 degrees Celsius.

This is a field full of jargon, and there’s confusion around when you can count carbon as truly “removed” or “negative.” To wit: “Carbon capture” typically refers to grabbing the carbon as it’s being emitted, like the flue gas of a coal power plant. “Carbon removal” usually means getting carbon dioxide after it has already reached the atmosphere. And there isn’t enough beer or soda in the world to use all those bubbles, so the captured carbon has to find new uses or get stored away forever.

The tools we have to manage carbon this way have their own benefits and tradeoffs. But they are all in their infancy and need to grow up quickly if we’re going to avert catastrophic warming of the planet. Here’s the lay of the land.

We can tweak the carbon cycle to reduce emissions

Nature has already covered the planet in solar-powered carbon dioxide absorbers, and they’ve been removing greenhouse gases from the atmosphere for millennia.

It’s almost a closed loop, though over the course of millions of years, enough decaying plant and animal matter gradually built up in the ground to yield vast reserves of fossil fuels while reducing the carbon dioxide in the atmosphere bit by bit.

Humans have breached this cycle by digging up fossil fuels and burning them, leading to carbon dioxide building up in the atmosphere faster than natural systems can soak it up. This has led to a net increase in greenhouse gases in the atmosphere, causing the planet to heat up.

Understanding this helps us frame our options for fighting climate change. If all you do is recirculate carbon dioxide in the air, you’re carbon neutral. But if you pull it out of the air and keep it from going back, you’re carbon negative.

One of the most powerful tools in fighting climate change is beneath our feet. Woodlands, prairies, algae, mangroves, wetlands, and soil withdraw carbon dioxide from the atmosphere and keep it from going back, tipping the balance negative.

Similarly, crops grown for human consumption like grains and grasses can also lead to negative emissions. These plants move atmospheric carbon dioxide into their root systems, so even if they’re eaten or burned for fuel, they leave some carbon in the soil. But the balancing act is trickier, since crops also require energy inputs like fertilizer and harvesting equipment. Clearing land to grow crops can also have a positive greenhouse gas footprint.

Another approach is to use holistic grazing practices for livestock. Rather than penning up these animals in factory farms, allowing them to graze over wider pastures can help restore grasslands as cattle, sheep, and pigs aerate the soil and enrich it with manure. The restored grasses then take in more carbon dioxide and store it in the soil.

These methods to fight climate change are often overshadowed by technological options, but they’re where we have the most experience and the best results so far. Restoring nature and planting more crops are also often cheaper than building and deploying hardware.

And, according to the new National Academies report, of the four CDR technologies that are ready for deployment, three involve the natural carbon cycle: planting new forests, improving forest management, and storing carbon in agricultural soils.

The big problem with these strategies is that there are tight constraints on how we use land. Forests, food, and housing needs compete for the same real estate, and there is not enough viable land to grow enough plants to completely offset all of humanity’s carbon dioxide emissions.

It’s also difficult to value the climate benefits of pristine or restored ecosystems against more measurable economic upsides like building housing or mining for resources.

Another option lies in growing crops that can be burned for fuel. Since their carbon came from the atmosphere rather than from underground reservoirs, biofuels can in theory be carbon neutral, or close to it.

But if you capture and sequester the greenhouse gases from a bioenergy plant, you can make the whole system carbon negative while also making heat, electricity, and fuels. The more crops you plant, burn, and sequester, the more carbon dioxide you remove from the air. That’s the logic behind bioenergy with carbon capture and sequestration (BECCS).

This has the added benefit of producing something you can sell to pay for the system. However, the same constraints that apply to afforestation also apply here. To limit global warming to 2 degrees Celsius using BECCS, one estimate found that it would require biomass planted over an area larger than India.

And fighting climate change with BECCS requires producers to be very picky about their biomass sources. If you cut down an old tree to burn and replace it with a sapling, it will take years before the new plant will be able to absorb the same amount of carbon dioxide as its predecessor. This limits the kinds trees, crops, and grasses that can be used sustainably for BECCS.

While carbon dioxide levels are at their highest levels in recorded history, the concentration is just 410 parts per million, about 0.04 percent of the atmosphere.

That means that building a machine to scrub carbon dioxide straight from the air is an immense challenge: Filtering it out requires moving a huge volume of air through a scrubber, which requires a lot of energy.

Nonetheless, there are companies that have already pulled this off. Carbon Engineering in Canada has built a plant that captures about 1 ton of carbon dioxide per day. Meanwhile Climeworks is running three direct air capture plants — in Iceland, Switzerland, and Italy — together capturing 1,100 tons of carbon dioxide per year.

What do you do with this carbon dioxide once you have it? Carbon engineering is working on an air to fuels pathway. In Iceland, Climeworks is turning its captured carbon dioxide into basalt rock, while in Switzerland the gas is used as a fertilizer in a greenhouse, and in Italy, the company is using the carbon dioxide to make methane fuel for trucks.

But right now, we’re only talking capture on the scale of hundreds of tons. Remember, the IPCC’s low-end estimate for the amount of carbon capture we need by 2100 is 100 gigatons. That’s 100,000,000,000 tons of carbon dioxide. So we would need more than 800,000 times our current annual direct air capture capacity by 2100 if we’re going to rely on this method alone to limit warming to 1.5 degrees Celsius.

This is by no means an exhaustive list of carbon dioxide removal tactics. Scientists are also exploring how to extract carbon from the air with seawater as well as enhanced weathering of rocks so that they react with atmospheric carbon dioxide.

But getting governments and companies to invest in these technologies requires a price on carbon. Direct air capture, for example, would be especially useful for offsetting some of the hardest sectors to decarbonize, like air travel. However, companies estimate it costs about $100 per ton to withdraw carbon dioxide from the air, so a carbon price would have to be higher than that. Or the technology has to become much, much cheaper.

So it’s capturing carbon dioxide and injecting it underground … to extract more carbon.

That means we need coordinated policies with climate change at the center to make carbon dioxide removal work to fight warming. In addition to pricing carbon, it would require pricing ecosystem services, research and development grants, and tax credits to encourage deployment of carbon dioxide removal.

And, as the National Academies points out, the heavy lifting will still come from accelerating the entire suite of low-emissions technology at the same time, from energy efficiency to renewables, as the chart below shows.

Only then will carbon removal truly start to have an impact in the fight against climate change.

What we can learn about QAnon from the Satanic Panic
The pandemic changed my mind about Peloton
How affluent people can end their mindless overconsumption
Can anything change Americans’ minds about Donald Trump?
Trump on Supreme Court case that could overturn Obamacare: “I hope they end it”
Putin may have given Trump a soccer ball with a microchip in it. It’s not what you think.