Teens are calling themselves “ugly” on TikTok. It’s not as depressing as you think. 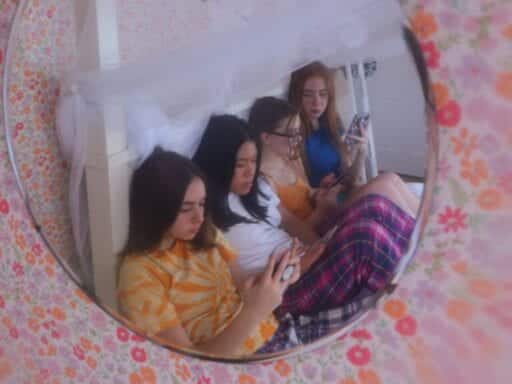 Instagram is a beauty pageant. TikTok is where kids are free to be mediocre.

There’s a TikTok that’s just a boy saying, “I may be ugly, but at least I’m also … dumb and annoying.” Then he dances while Ariana Grande’s “Successful” plays. It’s extremely funny, and a little bit sad, and I think about it every day.

Kids on TikTok call themselves ugly all the time, most of the time as a joke, but not always, and I’m never sure how I’m supposed to feel about it. “Why do I look like this? What’s the reason?” asked the popular TikToker @emmwee in her car without makeup. “Me being shocked at how ugly I look,” wrote Brittany Tomlinson, better known as the kombucha girl, at one moment in an unrelated video. “I like a boy but I’m ugly, what do I do with that?” sings 18-year-old high school senior David Postlewate, in one TikTok about a highly familiar experience.

David isn’t ugly by any means — none of these kids are — but the internet has created a never-ending conveyor belt of people so bafflingly good-looking that everyone else is immediately rendered ugly by comparison. “I know that I’m not going to look like Benji Krol,” says David, referring to the TikToker with a nest of raven hair and 5.6 million followers. “But I’m my own person, and that’s what makes you beautiful,” he says, not consciously referring to the One Direction song.

The thing about TikTok is that as much as it is a place for teenagers to goof off in their bedrooms, it is also the world’s largest beauty pageant. After all, part of the fun about making TikToks is getting to stare at your face for as long as you want, and if you happen to be very, very beautiful, then other people will enjoy staring at your face, too. A stunningly massive portion of the app is devoted to genetically blessed users, e-boys like Benji Krol and human Barbies like Loren Gray. A scroll through the TikTok’s home For You feed will reveal plenty of content where, despite whatever action is going on in the video, the real takeaway is “I’m hot.”

It is against this backdrop that its inverse, “I’m ugly” culture, has proliferated. Rather than trying to compete for views and likes with the genetically gifted, kids are pivoting to self-deprecation in a way that’s less depressing than it might seem to concerned parents: it’s a reclamation of mediocrity in an online space where everyone else is an overachiever.

17-year-old Annie Pham was satirizing TikTok’s culture of hot people and glow-ups when she made her viral video in late August. Using a popular meme where people would show their “before” selves and their “after” selves on the beat drop, Annie’s instead showed her “before” self trying and failing to transform. “Why isn’t it working?” she complains to the camera. “After like, a week, I was reading the comments, and it was really cool to see how much people relate to it,” she says.

Relatable videos are why people like TikTok in the first place, and feeling unattractive on TikTok is one of the most relatable experiences of all. David, of the “I like a boy but I’m ugly” video, for instance, has a TikTok bio that reads “ugly is my only personality trait.”

David only made the video because that’s what was happening in his life: He liked a boy who he thought was out of his league. (“He’s really cute, he goes to my school. We’re both in theater,” he says.) He describes himself as a “really confident person,” by the way. He just doesn’t take himself all that seriously.

Normal kids have created an entire genre of internet comedy devoted to how constantly seeing exceptional talent and beauty go viral makes the rest of us feel like ugly losers. On my feed I see videos of kids turning the shitty aspects of their lives into funny content: their most embarrassing sports mistakes, hideous childhood photos, dilapidated apartments, unfortunate haircuts, leg nipples, imprisoned parents, disproportionately long thumbs, sexual ineptitude, mental illness. And of course, their minor physical insecurities: girls who feel like they’re asymmetrical, girls who hate their smiles, girls who have a cute, pretty face but a body that “looks like a fucking potato.”

The layers of irony on any social media app that young people are using can be difficult for adults to parse, but when it relates to topics like body image and self-esteem, psychologists take it seriously. “I kind of celebrate what they’re doing — they’re trying to push back on the idea that we all look perfect on social media,” says Sara Frischer, a psychiatric nurse practitioner at Union Square Practice in New York City. “But I think it’s just a little misguided in how they’re doing it. It’s deflection, and it’s self-protective to then make a joke about it. It protects people from feeling vulnerable.” She gives the example of being a bad speller. If you say to yourself that you’re the worst speller in the world, that’s protecting yourself from someone else pointing it out.

But what if you’re just objectively a bad speller? What would true acceptance of that fact even look like? “That’s where self-compassion comes in,” she says. “Saying, ‘This is something I really struggle with, and I just happen to not be such a great speller.’ Having compassion for yourself, talking about how hard it is to struggle with this, and all the emotions involved. It’s adding self-compassion instead of self-deprecation. That’s the missing element.”

“I’m ugly” culture has spread so far on TikTok that now even TikTok’s “pretty people” are co-opting sounds and memes meant for those self-described uglies. That’s given way to a wider culture of policing, wherein those users’ comments sections are flooded with fishing rods to signify that they’re fishing for compliments.

In July, Ryan Sterling, a 23-year-old in the Chicago suburbs who has had alopecia since he was in middle school, uploaded a video that begins with a picture of Britney Spears with a shaved head followed by a picture of Mr. Clean, and then himself: “It all started when my mom met my dad, then they fell in love, and they had me. Hi, I’m Ryan,” he says. “And my life? It’s kinda crazy.”

Within a few weeks, the “Hi, I’m Ryan” video had spawned a massive viral meme, even ending up on a segment of Ellen. But whereas Ryan’s original video made fun of the way he looked, iterations that came after — often where a person would show their two very attractive parents and the punchline was their even more attractive self — were little more than excuses to brag. In September, Ryan posted another TikTok directed at them: “Get off my sound, it’s for ugly people!” he says. “All you pretty-ass people with your pretty parents and your perfect genes, get out of here! We uglies and the balds and the grosses and the ickies, we need to fight back!”

Olivia Chesney, a 19-year-old at Roger Williams University in Rhode Island, was in the middle of homework when she went into the bathroom to make a random video. She’s standing in front of the mirror and asking, “Why do I be looking so good from the front?” Then she turns to the side and bursts out laughing. The joke is that she looks bigger that way, and the video now has more than 2.5 million views.

That video isn’t the only TikTok she’s made about her body, and not all of them are self-deprecating. There’s one where she shows cute photos her friends have taken of her, and another lip synching to the 1958 swing song “The Bigger the Figure.”

Olivia, like all of us, lives in a world where even if you aren’t born skinny, or distractingly gorgeous, or whatever, you’re still supposed to do everything you possibly can to become those things; to starve your body down and add on some lip fillers until you’re deemed presentable. Americans continue to spend more money on plastic surgery and weight loss plans every year, and one study of UK youth showed that Instagram had the worst effect on body image among any social media site. There are an ever-growing number of billion-dollar industries built upon the profits that come from making people feel awful about themselves, even if those products are shrouded in the aesthetics of positivity and empowerment.

Calling yourself ugly on TikTok, then, is a form of freedom from the expectation of hotness. It’s a self-deprecating in-joke that only excludes the extraordinarily beautiful, who could maybe stand to be excluded from something for once.

“I’m ugly” culture on TikTok also obfuscates its happier subtext: That yeah, it’s okay to be ugly, because now you can focus on more important things. Olivia explains this feeling while talking about a video where she calls herself fat: “People who are ugly, people who are fat, it’s just like, why are we trying to hide it anymore? We can still live our lives and be that way.”

It’s not like “ugly” people don’t happy lives or fall in love or get rich or go viral on TikTok. The boy that David sang about? The one he liked? It’s possible that they’re maybe, sort of in the process of getting together.

“If I’m going to be completely honest, and I don’t know yet because things haven’t really been official,” he tells me, “but I think that stuff is starting to happen with him.” It’s all extremely beautiful.

Now with more money than anyone else, Elon Musk faces a new challenge: How to give it away
Comey: “No doubt” that Trump would face obstruction charges if he wasn’t president
The right keeps attacking Greta Thunberg’s identity, not her ideas
7 questions about The Witcher you were too embarrassed to ask
Joe Biden is ending Trump’s travel ban
Imagining the nonviolent state