Terrazzo used to be kitschy. Now it’s on everything from Spalding basketballs to Madewell dresses. 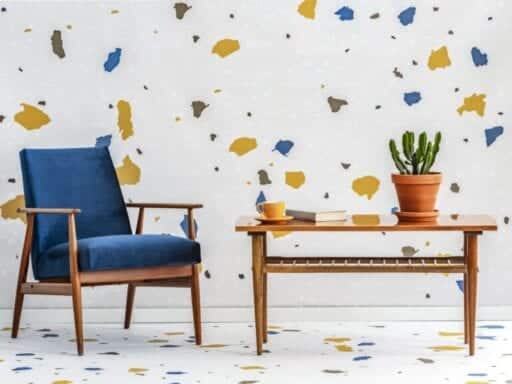 Welcome to Noticed, The Goods’ design trend column. You know that thing you’ve been seeing all over the place? Allow us to explain it.

What it is: Terrazzo, a speckled, durable style of flooring that originated in 15th century Venice. It consists of chips of marble, stone, or glass, the gaps filled by cement or a similar binding material; the surface is then buffed to a smooth finish. But we’re not actually talking about floors today, nor are we even necessarily talking about marble and cement. This is the terrazzo extended universe, which includes real terrazzo as well as flat, trompe l’oeil versions of the same: breezy Madewell dresses and leather luggage tags in terrazzo prints, terrazzo adhesive film available on Amazon, terrazzo Target throw blankets, terrazzo shower speakers from Asos, Make Beauty terrazzo eyeshadow and bronzer, and even a terrazzo Spalding basketball sold at Urban Outfitters. If it has a surface, it can and will be terrazzo-ed.

Where it is: At pretty much every home and lifestyle goods store you can think of. Plus the fashion department. And the beauty section.

Why you’re seeing it everywhere: First came the resurgence of terrazzo floors. As Jessica Furseth reported for Curbed last year, the style made its debut in Venetian palaces but enjoyed a long period of popularity in the US between 1930 and 1970. Terrazzo’s hard-wearing nature and unique ability to conceal dirt made it a fit for public spaces of all kinds, from those that evoke glamour and high culture (the Hollywood Walk of Fame, the Guggenheim Museum in New York) to those that feel decidedly more pedestrian, like middle schools and subways.

After a while, though, public interest dimmed, and terrazzo came to be seen as passé and kitschy. But the pendulum always swings back and, Furseth writes, “Over the past few years, terrazzo has staged an incredible comeback.” Now it lives in various temples of cultural capital: The Wing, The Ace, Soho House.

“After years of obsession with midcentury modern and restrained 1960s design darlings — Danish Modern, the Eames classics, corporate modernism — we’re now waking up to a renewed appreciation of texture, color, and tackiness, as perfectly embodied by terrazzo,” Furseth writes, noting that despite its retro vibes, terrazzo is also “undeniably elegant.”

It was a short leap from floors to every consumer product on the planet. The shift from restraint to ebullience that Furseth describes underpins many trends that have taken off recently: rainbow fashion, ’70s-inspired fonts, lime green makeup. The people want to have fun again! But not too much fun: Xenia Taler, a home goods designer who started making porcelain terrazzo-print coasters and plates in 2016 and 2017, respectively, sees terrazzo as a comfortable way to move forward from minimalism. It’s a reined-in version of the kooky Memphis design style, which emerged in the early 1980s and recently experienced its own revival.

“It’s almost like an exciting neutral,” Taler says of terrazzo — the perfect solution for when you want to add a bit of visual interest “but you don’t want to go crazy.”

Elana Berusch, a food scientist who moonlights as a baker, recently devised a colorful terrazzo cake decorated with shards of royal icing, which she spread on wax paper to harden before breaking it into irregularly sized pieces. She believes that terrazzo’s distinctive but easy-going look has contributed to its immense popularity on Instagram, where she posts her work.

“It’s a good way of incorporating color without it being overwhelming. You can have it as a backdrop or a countertop without it detracting too much [from the other elements of the image],” Berusch says. “It highlights rather than dominates.”

Chief among terrazzo’s virtues is its versatility. The chips can be large or small, sparse or crowded, in any color palette, allowing anyone to put their spin on it — though many of the available products come in the pleasing, well-trodden shades of blush pink, mustard yellow, and navy that spell millennial consumerism.

For some designers, terrazzo is a practical solution to production problems: John Meyers, who runs the soap and candle brand Wary Meyers with his wife Linda, started making speckled soaps in 2015 as a way of using up soap scraps left over at the end of the day. He didn’t set out to make terrazzo-inspired soaps, but after testing out the new method, he realized that the results looked a bit like the designer Shiro Kuramata’s terrazzo pieces. So John and Linda leaned into the reference. Today, the confetti-like bars are Wary Meyers’ bestselling soaps.

Taler was also thinking of waste reduction when she started making coasters with black-and-white terrazzo patterns. It was a way of hiding the small black flecks that occasionally appear on porcelain, because Taler felt compelled to discard flawed pieces. A tiny dot might not sound like a big deal, but in a retail environment, you want your product to look perfect, she says.

“I don’t think that’s what’s behind the [terrazzo] trend right now, but busy patterns do work in that way,” Taler says.

In an interview with Forseth for Curbed, the architect Dan Brunn suggests that people are gravitating toward terrazzo flooring because it’s unmistakably handmade: “You can really see the love that’s gone into it.” It’s then perhaps ironic that the popularity of terrazzo has resulted in its digitization, mass production, and flattening into stick-on wallpaper, stationery, and phone cases. That said, the style’s simple, geometric look is easy to replicate in any number of color variations; of course it would go viral.

Madewell head of design Joyce Lee says that her team often looks to patterns and textures found in interior decor — vintage textiles, rugs, weavings, art — when cooking up new clothing collections. Terrazzo, which is all over Madewell’s summer 2019 collection, was a natural progression: Lee says they loved its “color and ease” and felt it would translate beautifully into an all-over print.

There is one major difference between brands’ current love affair with terrazzo and its extended popularity in the mid-20th century, and that is the lifespan of the objects to which it’s being applied. Concrete and marble floors can be torn up, but they’re built to last a good deal longer than a fluttering summer dress or a novelty phone case. By the time those items came along, the flecked floors of our public spaces had already withstood decades of use and scrutiny. When today’s trend blows over, when the porcelain plates break and the soaps disappear down the drain, we’ll still have the unassuming terrazzo under our feet.

Almost all of the actresses who’ve played Cleopatra have been white. But was she?
With American Son, Netflix brings Broadway to the screen in an intriguing new way
Facebook is like sugar — too much is bad for you, says a top Facebook exec
I am Native American and a former football player. Our history is much darker than racist mascots.
First coronavirus death in the US reported in Washington state
Lovecraft Country’s first trailer teems with monsters, genre subversion, and social allegory