“That’s not the truth, Ellen”: How Dakota Johnson won her birthday feud against Ellen DeGeneres 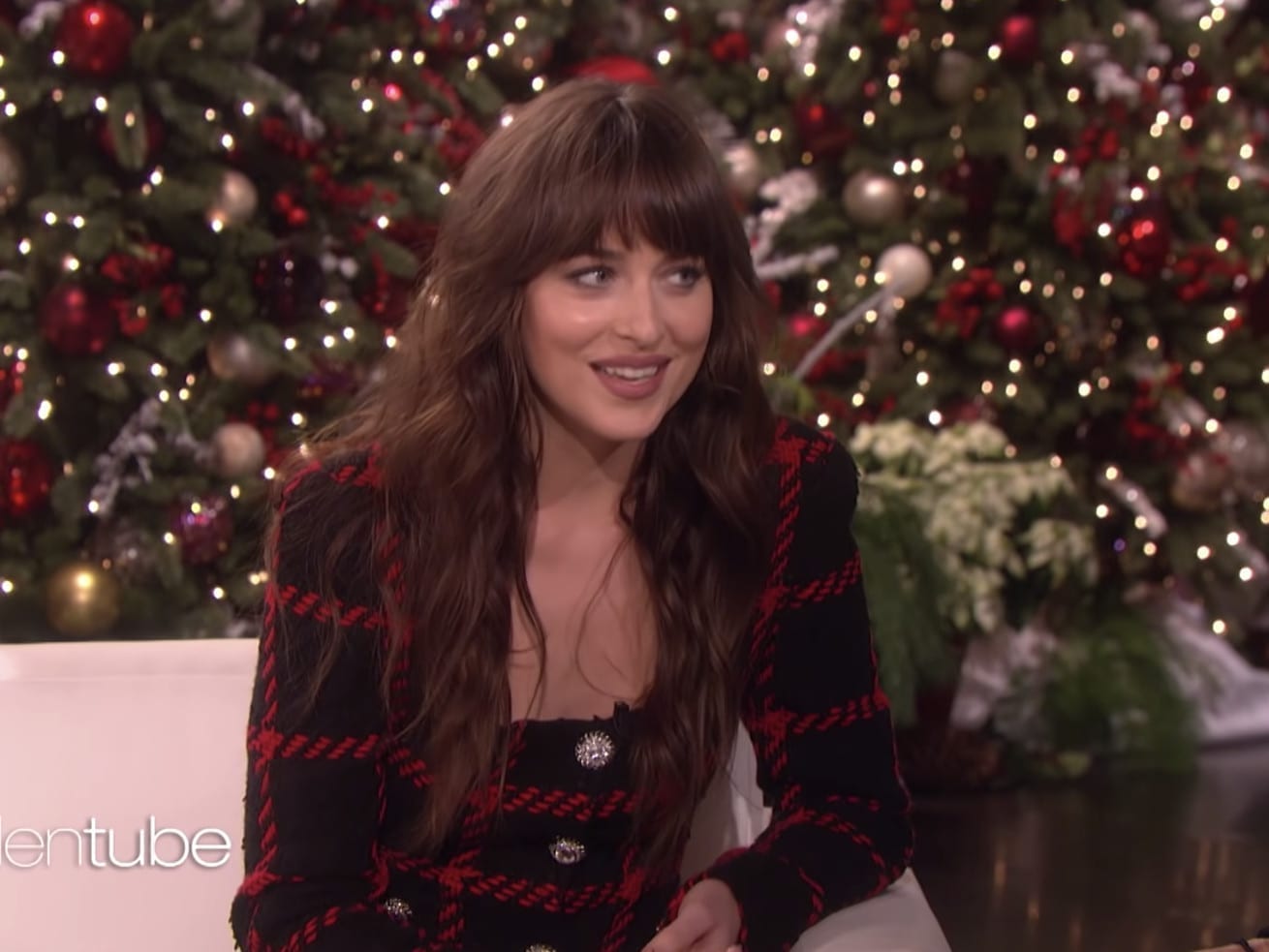 Ellen DeGeneres said Dakota Johnson didn’t invite her to her birthday. This was a big mistake.

On Wednesday, November 27, as most Americans prepared to celebrate Thanksgiving, a time when we are supposed to reflect on the blessings in our lives, actress Dakota Johnson was waging a thrilling and terrifying war on the battlefield known as the Ellen show.

“Actually, no, that’s not the truth, Ellen,” said the star known for anchoring the 50 Shades of Grey movie franchise and for being the daughter of Melanie Griffith and Don Johnson. “Ask everybody. Ask Jonathan, your producer.”

The truth in question was whether Johnson — who also played a witch who tears apart evil women, muscle from bone, in 2018’s Suspiria remake — had invited DeGeneres to her 30th birthday party in October. DeGeneres had opened her interview with Johnson by wishing Johnson a happy belated birthday and asserting that Johnson had not invited her,

Johnson insisted that she had, and called for witnesses, while DeGeneres denied the accusation.

Finally, off-camera, someone affiliated with the show confirmed that Johnson was right. DeGeneres had been out of town and couldn’t be there, said a woman wearing a headset.

“Why didn’t I go?” DeGeneres asked out loud, admitting defeat and joking. “Oh yeah I had that thing. [The party] was probably in Malibu, that’s too far for me to go to.”

The party, according to E Online, was indeed in Malibu, on October 5 (Johnson’s birthday is October 4). It was attended by a celebrity flock that included the likes of Miley Cyrus, Coldplay frontman (and Johnson’s boyfriend) Chris Martin, Goop empress Gwyneth Paltrow, and comedian Tig Notaro.

DeGeneres’s whereabouts on October 5 are not publicly known, but she was spotted in Texas the next day, sitting beside George W. Bush at a Dallas Cowboys game. The October 6 appearance caused an online backlash because of DeGeneres’s apparent willingness to be friendly with a former president whose administration supported anti-LGBTQ policies (DeGeneres is gay) and failed to act in the face of Hurricane Katrina (DeGeneres was born in Louisiana).

To be clear, Johnson didn’t bring up DeGeneres’s “thing” in Texas. She simply stated that DeGeneres wasn’t telling the truth about not being invited, and was bolstered by someone who works on the Ellen show. She clearly caught DeGeneres in a lie, and for many, the resulting awkwardness was darkly satisfying to watch.

But Johnson’s call-out cuts deeper in the context of DeGeneres’s recent struggles to maintain her image of being one of the nicest people in Hollywood. DeGeneres built her entire brand of comedy around being a beacon of wholesomeness and niceness in an industry often roiled by gossip and tabloids. And she did so while being an LGBTQ pioneer at a time when it was rare for LGBTQ celebrities to be publicly out.

Today, millions of people tune in for each episode of her wholesome daytime talk show. But as 2019 has worn on, many people have started to doubt DeGeneres’s nice, wholesome image, and some have suggested she’s not as good or as nice as we’ve been led to believe. In that context, a fight about a birthday invite isn’t about a birthday invite at all but about the power of celebrity image and what happens when that image becomes tainted.

Johnson’s prickly interview with DeGeneres is actually an uncomfortable mirror of her 2018 appearance on the Ellen show, which she visited while promoting her movies Suspiria and Bad Times at the El Royale. When DeGeneres introduced Johnson, she made snarky jokes about the length of Johnson’s skirt:

“Did you try that on before — do you want a blanket or anything?” DeGeneres asked, before trying to cover up Johnson’s legs with an index card and then a series of tissues. DeGeneres then segued the conversation into pregnancy rumors surrounding Johnson’s relationship with Martin.

“That is a mighty tight outfit for someone’s who’s pregnant,” DeGeneres said.

The joke flopped. A disembodied groan wafts through from the audience. Johnson played it off. “They don’t even know what you’re talking about,” Johnson said, suggesting the studio audience hadn’t heard any rumors at all. “The only thing I’m pregnant with is good ideas. Not any babies.”

With DeGeneres having paid so much attention to Johnson’s birthday party invite list in 2018, it makes sense that Johnson would be on her toes when questioned about the same thing in 2019. That explains her defensiveness.

“Last year, on the show, you gave me a bunch of sh*t for not inviting you,” Johnson said.

The amount of time DeGeneres had previously paid to Johnson not inviting her to her 2018 birthday party — coupled with the 2019 invite that did materialize (according to Johnson and one of the Ellen show’s producers) and DeGeneres being caught in a lie about not being invited — helped energize the clip to go viral.

No doubt, there’s a certain wish-fulfillment aspect to this confrontation for people who aren’t Johnson but have encountered similar scenarios in which they’re unfairly painted as mean or misunderstood as an aggressor. Being able to call someone out on a lie and have people back you up, especially people who are friends with the liar, is satisfying. As is living vicariously and watching someone called out on it.

dakota johnson getting annoyed on ellen: a saga pic.twitter.com/SNsWB4yxjT

The virality is also largely dependent on the circumstances of Ellen DeGeneres being Ellen DeGeneres. It’s unlikely that anyone would have cared if DeGeneres really thought Malibu was too far to go for a birthday party. The real fuel for this social media blaze is that DeGeneres has always portrayed herself as the type of celebrity who would never lie about that kind of thing.

For some viewers, Johnson’s confrontation with DeGeneres hit a rarified intersection of vindication and thrill. Most talk shows don’t stray very far from promotion, silly anecdotes, and trying to sell to the audience the idea that their guests are all normal, fun people whose movies, music, and television shows you should probably consume.

Ellen is a show that’s succeeded for 16 years and counting because Ellen DeGeneres herself is the pinnacle of nice. If she ever acts confrontational, it’s in a gentle and “in good fun” sense of the word. She is known for giving generous gifts to the average people she invites onto her show, and taking record-breaking selfies with famous friends. She’s widely recognizable as a nice woman with a nice talk show full of nice people.

But lately, there’s been a shift in that perception and a growing belief that DeGeneres’s niceness hardly deserves so much praise and respect. Anyone who has come into contact with real human beings knows that being as nice as DeGeneres is on television, 100 percent of the time, is a fantasy. DeGeneres herself knows it; she told the New York Times in a 2018 interview that one of her struggles was to overcome the nice image she created for herself.

Earlier this year, in a different display of that uncritical niceness, DeGeneres brought Kevin Hart on her show after he walked away from hosting the Oscars. Hart had stepped down after refusing to apologize for homophobic jokes. DeGeneres urged him to ignore “the haters,” and was subsequently criticized for dismissing the seriousness of Hart’s jokes.

As my colleague Constance Grady wrote for Vox in October, people seem to have grown tired of what Grady labeled DeGeneres’s “uncritical niceness”: the idea that we should be nice to everyone regardless of whether they’ve done bad things.

To her critics, DeGeneres’s uncritical niceness is a failure to hold friends and loved ones accountable.

Skipping Johnson’s party in Malibu — whether because it was simply “too far” or because she had other plans to go to Texas and hang out with George W. Bush — isn’t DeGeneres being nice to a fault, but rather a display of DeGeneres’s own priorities and personal leanings. We don’t know all the details, but in retrospect, it looks like DeGeneres chose to travel to Texas to spend time with someone many people find unsavory rather than attend someone’s birthday party across town that she, as she intimated on her show, clearly wanted to be invited to. And being nice to the wrong people raises the question of whether or not DeGeneres is actually a nice person at all.

Add to that, this entire scuffle with Johnson was an unforced error, with DeGeneres choosing to joke about and rib Johnson about not inviting her — painting Johnson as the kind of celebrity who’s too cool or not “nice” enough to invite Ellen DeGeneres to a fabulous party. With the facts revealed, Johnson vindicated, the awkwardness of DeGeneres caught up in a blunder of her own doing, and the rich detail of DeGeneres having missed the party while hanging out with George W. Bush, the clip gave DeGeneres’s critics an example of how phony her nice image might be:

Why is this so satisfying? pic.twitter.com/TexnYjrVsH

Johnson, meanwhile, has possessed a narrative about her not putting up with trivialities.

Though the 50 Shades movies never found critical praise, Johnson is considered as the best thing about them. She also was also mordantly admired for having no chemistry whatsoever with and possibly despising her 50 Shades co-star Jamie Dornan. Johnson also famously called out DeGeneres’s fellow nice talk show cohort Jimmy Fallon in an interview once for not letting her speak and constantly talking over her.

Essentially, Johnson seems to not be afraid of anything and to not stand for bullshit.

Viewed through that lens, Johnson and DeGeneres’s uncomfortable conversation wasn’t just a viral talk show clip about a harmless mistake. It was Johnson telling the truth and DeGeneres getting caught in a lie.

So, to anyone who’s doubted whether Ellen DeGeneres is really that “nice,” it sure was satisfying.

Hey, older TV fans: networks just might start caring about you again!
Just because you’re working from home doesn’t mean your boss isn’t watching you
The unfair pressure for Birds of Prey to be a great feminist superhero movie
The 9 most important unanswered questions about Covid-19
Trump slashed refugee levels this year. For 2019, he’s slashing them even further.
You’ve been invited to Clubhouse. Your privacy hasn’t.