The 2000 election doesn’t justify Trump’s refusal to concede to Biden. Here’s why. 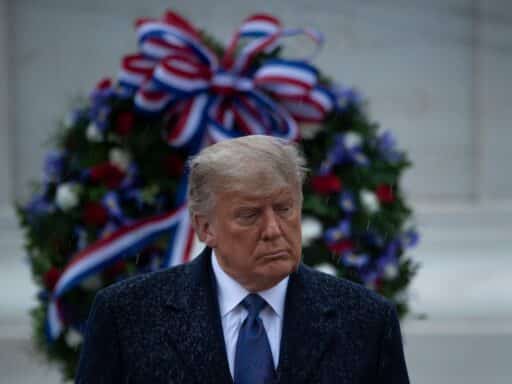 The 2000 election hinged on 537 votes in one state. Biden’s victory over Trump was a blowout by comparison.

Secretary of State Mike Pompeo’s news conference on Tuesday will be best remembered for his shocking comment that despite President Donald Trump’s loss to President-elect Joe Biden, “there will be a smooth transition to a second Trump administration.” But another defense he gave for the Trump administration’s refusal to concede an election Trump lost warrants some attention.

As he seemingly tried to temper his initial statement refusing to accept the election results, Pompeo compared this election with the controversial 2000 one, saying, “It took us 37-plus days in an election back in 2000. We conducted a successful transition back then.”

Pompeo’s implication was that the outcome of this election is similar to what happened in 2000, when George W. Bush’s victory over Al Gore wasn’t determined until a Supreme Court decision on December 12 of that year. And he’s far from the only Trumpworld figure who has invoked 2000 to justify Trump’s refusal to concede. The Trump appointee leading the General Services Administration, the head of the National Republican Congressional Committee, campaign legal adviser Jenna Ellis, and Trump loyalist Gov. Kristi Noem (R-SD) have all taken this tack.

Gov. Kristi Noem (R-SD): “We have not finished counting votes … Back in 2000 Al Gore was given his day in court. We should give President Trump his day in court.” pic.twitter.com/AoIK9UVBf2

But comparing the president’s chances favorably to Bush’s win in 2000 probably isn’t the most convincing way to defend Trump’s refusal to acknowledge the reality that he lost.

As a reminder, the 2000 election came down to Florida’s 25 electoral votes, which were ultimately decided by a margin of just over 500 votes. Hard-fought recounts in the state brought the terms “hanging chad” and “dimpled chad” into public consciousness. Florida — and by extension the presidency — wasn’t decided for Bush until December 12, when, in a controversial decision, the Supreme Court determined that an ongoing recount in Florida violated the 14th Amendment’s equal protection clause.

Trump is clearly hoping for something similar to happen this time around. But there are two glaring differences between Trump’s loss to Joe Biden and the Bush-Gore situation that make the 2000 comparisons inappropriate.

When the Supreme Court halted the final Florida recount in December 2000, Bush led Gore by 537 votes. That was roughly one-third of the 1,784-vote margin that Bush led Gore by following the initial tally after polls closed.

Recounts rarely change the result of an election. A recent analysis from FairVote found that from 2000 to 2019, only three of 31 statewide recounts overturned the result of a race, and in all three cases, the original margin of victory was under 0.05 percent. The margins in the key states where Biden bested Trump by relatively narrow margins are nowhere near that close.

Trump is losing to Biden by…

These are not margins that get undone in recounts.

It’s true that Georgia, for one, will conduct an automatic recount. And the Trump campaign has already announced its intent to request a recount in Wisconsin, where it is legally allowed to do so because of the narrow margin. But given Biden’s current lead there, it’s nigh impossible that Trump flips it — hence the decision from Vox’s partners at Decision Desk to call the Midwestern state for Biden. Even in the highly unlikely result that recounts somehow flip both Georgia and Arizona to Trump, Biden, who appears to have won 306 electoral votes, would still have more than the 270 electoral votes necessary to clinch the presidency.

The 2000 election came down to hundreds of votes in a single state. Biden, by contrast, has a decisive advantage in the Electoral College with at least one state to spare. So while it would make sense for Trump to refuse to concede if the result hinged just on Georgia or Arizona, recounts don’t provide him with a realistic path to victory.

Recounts aside, Trump’s hope seems to be that he’ll benefit from a Supreme Court decision in a way similar to Bush in 2000, when Bush v. Gore effectively handed Bush the presidency by stopping a recount. As my colleague Ian Millhiser recently detailed, the Court’s reasoning “was widely viewed at the time, and is widely viewed now, as a political decision and not an exercise in legal reasoning.”

So yes, there’s precedent for the Supreme Court intervening in an election. But the problem for Trump is that his legal team has yet to come up with a case that could conceivably force the issue. Trumpworld has spent the past week insisting that fraud swung the result for Biden in places like Pennsylvania and Michigan, but they’ve been unable to produce any credible evidence to back it up. Kayleigh McEnany’s appearance on Tuesday evening’s edition of Sean Hannity’s Fox News show illustrated the increasingly farcical nature of these efforts.

Hannity just featured another episode of Trumpers owning the libs with reams of paper pic.twitter.com/lniNN5GWnJ

The Trump campaign has filed a dozen lawsuits alleging irregularities, but none of them have been successful. Notably, in a Pennsylvania court on Wednesday, a lawyer representing Trump acknowledged that allegations being brought by the campaign in Montgomery County don’t rise to the level of fraud.

Today in court, a Pennsylvania judge asked a lawyer for Trump point-blank whether he was alleging fraud.
(Full transcript here https://t.co/K2mfxFbtGZ) pic.twitter.com/y17v0PFkMx

As the above transcript indicates, the case involves 592 ballots in a state that Trump lost by nearly 50,000 votes. That’s just one of many lawsuits brought by the Trump campaign, but it illustrates a broader problem: Trump’s lawyers aren’t challenging anywhere near a sufficient number of votes to affect the outcome.

Along similar lines, litigation brought by the campaign in Arizona impacts fewer than 200 ballots in a state Trump lost by nearly 15,000 votes.

In short, the Trump campaign hasn’t produced any evidence of fraud, and the allegations of irregularities have no chance of affecting Biden’s ultimate victory. Even the campaign’s most significant legal challenge — one in Pennsylvania to mail ballots that arrived after Election Day — only affects about 10,000 ballots, far too few to jeopardize Biden’s victory in the state.

By contrast, the Supreme Court got involved in the 2000 election because there were legitimate constitutional questions raised by Florida’s recount process, and the resolution of them had decisive implications for the result. As Kristine Phillips recently explained for USA Today:

In 2000, the Supreme Court looked at the issue of equal protection, which requires the government to treat individuals in the same way. There needed to be a uniform way of considering ballots during the recount, and there wasn’t, which violated an equal-protection right voters have to have their ballots treated equally during an election. The court ruled that because Florida counties conduct recounts differently, continuing the recounts was unconstitutional.

Ultimately, comparisons between 2020 and 2000 would carry more water if this year’s election was closer and the Trump campaign could wage a legal fight for its survival in one state. But not only did Biden win with states to spare, no state is as close as Florida was two decades ago.

Moreover, the Trump campaign’s strategy has been to make allegations of irregularities and then try and find evidence for them later. That may be an effective way to delegitimize Trump’s loss in the eyes of his supporters, but it doesn’t work in courtrooms.