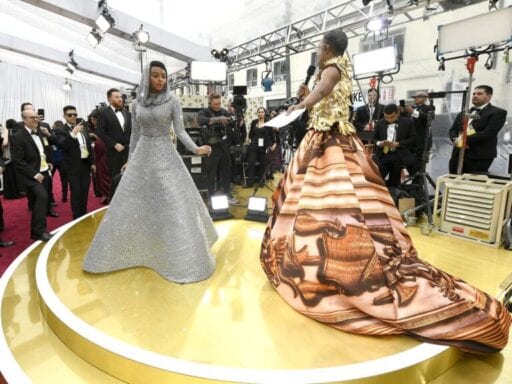 While the Oscars is first and foremost an awards show, it’s also a huge fashion event for the celebrities walking the red carpet, and the designers who fight to dress them. Attendees are expected to put their most glamorous foot forward, as their outfits will likely be memorialized (or mocked) on social media and the best-dressed lists circulating the internet.

This year’s red carpet saw a lot of pink, ruffles, and sparkles — fashion elements that would help the stars stand out on a crowded carpet. Many male stars also found a look they could agree on, ditching the traditional black tux and white shirt for an all-black look.

We’re not determining what were the “best” looks of the evening per se, but rather highlighting the stylistic choices celebrities made that were the most eye-catching, interesting, and memorable. These are the five celebrities who best summed up the 2020 Oscars red carpet.

Every shade of pink was present on the red carpet this evening, but the 10-year-old actress’s flowy pink number by Christian Siriano captured all the elements of the most memorable pink dresses: extra tulle and ruffled sleeves with a long train.

Mahershala Ali and the men in black (on black)

Most male actors walk the red carpet in a sleek black tuxedo. It’s a safe and simple choice of attire that’s notoriously uninteresting compared to their female counterparts. This year, however, a striking number of men opted for a black tux black shirt combo — a refreshing, if slight, change from the typical white shirt ensemble. Stars like Mahershala Ali and Rami Malek and directors Bong Joon-ho and Todd Phillips sported crisp all-black looks. If only Timothée Chalamet got the memo!

Sparkles, especially sparkles on form-fitting dresses, are not out of the ordinary at the Oscars. Janelle Monáe looked like a knight in shining armor in her gray crystal-embellished gown by Ralph Lauren. Brie Larson donned a floor-length sparkling rose gold dress, Maya Rudolph showed up in a dazzling orange caftan, and Kaitlyn Dever’s strapless red dress was decked out with glass beads and Swarovski crystals.

When in doubt, just add ruffles. Kristen Wiig’s red Valentino dress was perhaps the most extreme example of the plentiful, often structural ruffles that adorned many stars’ dresses this evening. While Wiig’s gown has drawn comparisons to lasagna and a sea creature, other celebrities had more subtle ruffles that added a touch of playfulness and volume to their outfits.

Billy Porter and Billie Eilish. Do they really need an introduction? These two style icons might share a name and a tendency to buck fashion norms, but they gravitate toward radically different style choices. Billy Porter, star of the FX series Pose, is famous for his theatrical, gender-bending red carpet outfits. His 2020 Oscars look was “all about royalty”: a golden, feather-like bodice paired with a billowing rust-orange skirt.

Meanwhile, Billie Eilish, who performed “Yesterday” during the In Memoriam segment of the Oscars, walked the carpet in a white chunky suit emblazoned with multiple Chanel logos. The 18-year-old singer tends to wear androgynous, oversize clothing, and her Oscars look isn’t a departure from her previous ’fits.