The 4 options to rescue the Thai boys trapped in a cave, explained 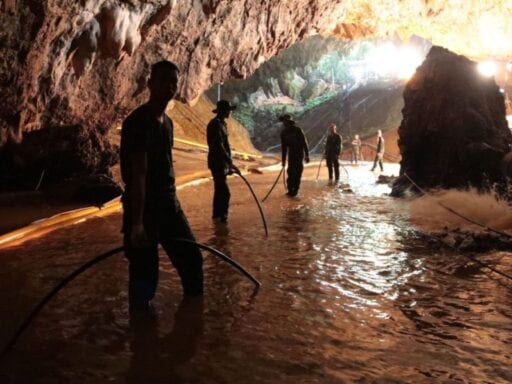 The boys may have to swim out of the cave, accompanied by a “buddy” expert diver.

Thai officials are still fine-tuning the plan to rescue the 12 Thai boys and their soccer coach who are trapped in a cave in northern Thailand, as the possibility of heavy rains that could threaten the boys’ safety remains.

On Friday, one of the rescuers, a former Thai Navy SEAL diver, died while transporting oxygen tanks through the cave, and the oxygen level in the chamber where the boys are reportedly dipped to 15 percent. (The air you and I are breathing contains around 21 percent oxygen.)

But by Saturday, an air pipe had been run all the way from the rescue base inside the cave to the chamber where the boys and the coach are waiting to be rescued, about three miles from the cave’s mouth.

Officials are now debating the best way and moment to extricate them from the Tham Luang Nang Non cave system. All of the options are dangerous. And it’s a race against time because if more monsoon rains fall and flood the cave anew, the operation could become considerably more difficult.

CNN reports that one rescue plan involves “a ‘buddy dive’ — where an experienced adult diver would swim with each boy — to evacuate the team members.”

The boys did not know how to swim when they entered the cave on June 23 and got trapped there, but an official told CNN that rescuers are teaching them to swim and dive.

The officials leading the rescue mission are also exploring three other different options, none of them ideal: drilling into the cave so the boys can climb out through a new passage, pumping water out so the boys can walk out the way they came in, or leaving them in the cave until the water recedes and they can walk out.

SpaceX and Boring Company CEO Elon Musk has said he has sent engineers to help with the effort, tweeting that they were working on an “escape pod design” and an “inflatable tube with airlocks.”

Let’s walk through what we know about the rescue options, from most likely to least likely.

As of Saturday, there were signs that rescuers were leaning toward the “buddy dive” option, in which the boys would be given full-face oxygen masks and expert diver buddies to guide them through the cave, back to the mouth.

But this is likely still a highly risky plan as the nearly 3-mile journey has been described by expert divers as “gnarly,” with sections of diving in cold, pitch-black water through tight passages, taking oxygen tanks on and off. And while the boys are receiving food and medical care (and now finally fresh oxygen through the pipe), they are weakened from the ordeal.

The AP reported on Thursday that it would be tricky, but possible, to teach the boys to dive in such a short time:

“We are talking kilometers of transport under the water with zero visibility,” said Claus Rasmusen, a certified cave diving instructor based in Thailand who has been helping Thai SEAL team with logistics. “It’s difficult.”

He said it was awkward, but possible, to teach them minimal skills.

“Nobody will teach anyone a full cave course, but trying to get them comfortable with masks, with the breathing, (is) completely different,” he said. “Creating an environment that can make them safely get away, that’s feasible.”

It currently takes the experienced divers five hours to make the journey out of the cave, due to high currents, poor visibility, and narrow, muddy paths.

2) Drilling into the cave

The cave where the boys are trapped is about half a mile below the surface, in a mountain range. A few days ago, drilling through the side of the mountain to retrieve them seemed unfeasible because it would require new roads to accommodate the drilling equipment, as well as better maps and time to figure out where exactly the boys are and how to reach them.

So far, the BBC reports that over 100 holes have been dug into the mountain. But as of Saturday officials were saying this plan looked less promising.

When Elon Musk first announced his interest in helping the operation, he noted that his company’s “advanced ground penetrating radar” and skill “at digging holes” could make the task easier.

But as of Saturday, it appeared that Musk’s engineers had been working with Thai cave experts on another plan: “an escape pod design” and “building an inflatable tube with airlocks.”

2) Pumping out the water

An international team, including members of the US Air Force, has been working round-the-clock all week to pump the water that has flooded the cave in the hopes that the boys can simply walk out the way they came in.

The rescuers have been successful so far because the weather has stayed dry all week. But the monsoon rain could hit this weekend and could flood the caves again.

4) Waiting out the monsoon

Initially, the Royal Thai Navy felt the lowest-risk option was simply waiting for water levels to subside. Captain Anand Surawan of the Thai Navy said that they have already sent down four months worth of food and wanted to prioritize the health and safety of the boys before moving them out. Since the monsoon season ends in October, this could mean up to a four-month wait.

But with the first fatality and the risk of rains bringing even higher floodwaters into the cave, waiting out the monsoon has become a more and more dangerous option.

The Guardian reports that the mission has a new sense of urgency, according to Thai Navy Seal Rear Admiral Arpakorn Yookongkaew: “At first we thought we could sustain the kids’ lives for a long time where they are now, but now many things have changed … We have a limited amount of time.”

The Supreme Court appears likely to reject the latest attack on Obamacare
Everything you need to know about making your own face mask
Pandemics are not wars
A historic Second Amendment showdown in the Supreme Court dies with a whimper
Facing a new coronavirus strain, the UK imposes a strict lockdown
Bob Woodward’s new book Rage, and the controversies around it, explained