The absurd whiteness of America’s court system, in 2 charts 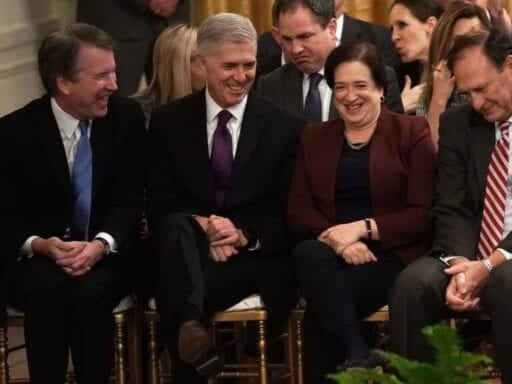 If you are ever unfortunate enough to wind up in federal court, chances are that your fate will be decided by a white man.

The report is authored by Danielle Root, with Jake Faleschini, and Grace Oyenubi as co-authors. (Disclosure: I was an employee of the Center for American Progress until last August. I played no role in the crafting of this report.)

Despite the dismal findings, the CAP report actually paints a fairly optimistic picture of the trends in both political parties’ nominees for the federal bench — at least until very recently.

For Democrats, President Jimmy Carter’s administration was a turning point for judicial diversity. Carter established a commission to choose federal appeals court judges, effectively wresting control over a selection process that was previously dominated by senators. Carter’s commission emphasized merit selection and, more so than any prior judicial selection process, diversity. And every Democratic president since Carter appointed a more diverse slate of judges than the last Democrat to hold the office.

And Republican presidents also appeared to be making (albeit much slower) progress towards a more diverse bench. As the CAP report notes, “since the late 1980s, every president except Trump has made the judiciary more racially and ethnically diverse than the proceeding president of the same party.”

That said, even decades of progress has left the federal courts largely white and male — and the Trump presidency seems poised to reinforce that.

Under Trump, the trend toward diversification has halted — and gone in reverse. According to the report, “of Trump’s judicial appointees, 78 percent are male and 86 percent are white, with white men comprising 67 percent of Trump appointees.”

Trump, of course, took office in 2016 on the strength of his performance with white male voters, a demographic that also backed Republicans in the 2018 midterms. CNN exit polls of the 2018 electorate found that Republicans won men by 4 points during that year’s midterm elections. Democrats won their majority in the House of Representatives because of their enormous 59-40 advantage among women.

Similarly, Republicans won white voters by 10 points — while simultaneously being crushed 76-22 among voters of color.

Trump’s decision to appoint overwhelmingly white and male judges, in other words, makes sense because that’s who his voters are. And if the GOP continues to appeal narrowly to white men, we can expect a future slate of Republican appointees to be even less diverse than Trump’s.

The report offers a list of recommendations to help diversify the bench, most of which involve diversifying the “pipeline” of law schools, judicial clerkships, and law firms that place young lawyers on the elite path that can end in a federal judgeship. Sitting judges, for example, could “adopt a practice similar to the NFL’s Rooney Rule, whereby judges would be required to interview at least one candidate from a demographically underrepresented group and at least one candidate from a law school not ranked in the top 14 for clerkship positions.“

In the near future, however, law schools are likely to grow even less diverse. On Tuesday, a federal judge in Massachusetts upheld Harvard’s undergraduate affirmative action program against a high-profile suit challenging that program. But that was just a trial court decision. The Supreme Court’s Republican majority is likely to abolish affirmative action, and fairly soon.

Fisher v. University of Texas at Austin, the 2016 decision upholding UT Austin’s affirmative action program, was only possible because Justice Anthony Kennedy cast a surprising vote in favor of the program. But Justice Kennedy is no longer on the Court, his replacement is significantly more conservative, and Fisher wasn’t even that much of a victory for affirmative action. Kennedy’s opinion places a high, ongoing, and expensive burden on any university that wishes to consider race in admissions. And any university that takes on such a burden risks becoming immortalized as the defendant in a landmark Supreme Court case abolishing affirmative action forever.

Ultimately, the decision to nominate or not to nominate diverse judges rests entirely with the president of the United States. CAP’s recommendations may help create a broad list of diverse candidates, but the president has to choose to draw from that list. If future presidents come from a party that feels beholden largely to white men, then we can expect many more white men to fill seats on the federal bench.

Alpha takes a conventional boy-and-his-dog tale and does something wholly unexpected with it
How baby clothes became a pink and blue battleground
Why health insurance in rural America is suddenly getting cheaper under Obamacare
As Black Friday approaches, Amazon workers demand better labor conditions
Demi Lovato has always been honest about recovery and relapse. It’s why her fans love her.
A simple guide to the vaccines and drugs that could fight coronavirus