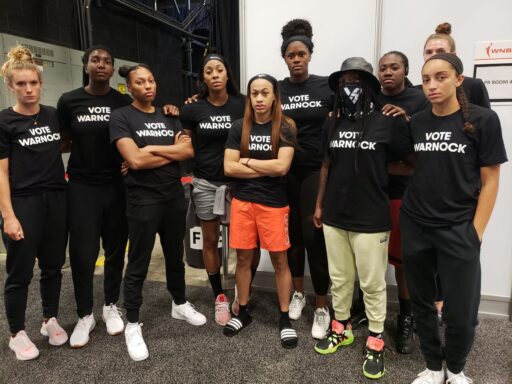 Our endorsement in the runoff Senate election comes after years of the WNBA, and so many other leagues, pushing for social change.

On our first nationally televised game of the 2020 WNBA season, my team — the Atlanta Dream — decided to seize the moment. We walked into the arena wearing tees that said Vote Warnock, a sea of black shirts of solidarity. At the time, Rev. Raphael Warnock was a long shot in Georgia’s Senate election, a Democrat polling at fourth in a traditionally red state. What made our endorsement extra bold is that his opponent, Kelly Loeffler, the sitting senator, was a co-owner of our team.

Flash forward to five months later, and I’m lying in my bed in Ankara, Turkey, where I’m playing in the Turkish league for the winter, scrolling anxiously through Twitter. I had barely slept the night before, waking up every couple of hours to check the news of Georgia’s Senate race. That’s when I spotted the tweet.

“Warnock has been declared the winner of Georgia’s runoff election.”

Almost immediately, I opened up our Dream team group chat. Congratulations were pouring in from our coach, our general manager, and our teammates. The candidate we endorsed would give Georgia its first Black senator. All I could feel was relief.

Since I started playing on Atlanta’s WNBA team, I’ve witnessed our league continue to stand up and organize around social justice. From our union’s negotiations over fair pay to this summer’s racial justice protests, we in the WNBA have been making our voices heard over the past year. Atlanta Dream’s endorsement of Rev. Warnock in Georgia’s Senate race was our latest action, and one of our most important moments this year — this was our home turf, and our state had the chance to flip the Senate blue.

The story behind our endorsement is the result of hundreds of decisions and networks that built on one another over the course of last year. But it officially started last summer. Our team, along with the whole league, had decided to make a statement during the George Floyd protests by wearing Black Lives Matter shirts honoring Breonna Taylor, the 26-year-old Black woman killed by police this summer in Louisville, and other Black women killed by the police. This prompted our co-owner, who was appointed as Georgia senator after the previous senator resigned, to make a statement about us. She said she opposed Black Lives Matter and that we need less, not more, politics in sports.

We had not come to promote Black Lives Matter as a team without a lot of consideration and thought, and we now felt like our voice was being used as a prop by our co-owner to drum up support among her conservative base. Our team, and the larger WNBA league through our union, started talking about what we could do. We decided that rather than make a statement about it, we would do the opposite of our co-owner: use our actions instead of our words.

Within our union’s executive committee group chat, we started throwing out ideas, including the upcoming Senate race. We started looking at candidates, and had a phone call — open to all players on our team — with Rev. Warnock. It was an opportunity for us to see what he was about, ask him questions, and vet him for a potential endorsement. After chatting with him, we discussed him as a candidate among our players, making sure everyone was comfortable with throwing their support behind him. After about a month of conversation, we all decided on wearing our Vote Warnock T-shirts, not just to our first nationally televised game but at other games as well. It wasn’t just us — other WNBA players jumped in and wore the shirt, too. We took photos and posted about it.

Warnock started to rise in the polls, and donations started pouring in as well. So we kept up the pressure. We made sure we had accurate voter registration and location information and amplified that on social media, too. Throughout all of it, I don’t think I or any of my teammates brought up our co-owner once, choosing instead to keep our eye fixed on the Senate race.

Now that Warnock has won, helping to flip Georgia and our Senate blue, I can’t help but feel cautious optimism about what’s to come. But we were just one in so many groups working together to help get Warnock elected, including the New Georgia Project and Fair Fight. And without the incredible activism of Stacey Abrams, who sits on the WNBA’s union Board of Advocates, and Lisa Borders, former WNBA president, this wouldn’t have happened.

The election comes after years of the WNBA, and so many other leagues, pushing for social change. This summer, all of our teams were inside the bubble as a pandemic and racial justice protests raged on the outside, which helped facilitate so many conversations among us about what was happening. We had a social justice council that talked with organizers and people like civil rights lawyer Kimberlé Crenshaw, who coined the word intersectionality, to make sure we were being intentional with our activism. Even as we transitioned out of the bubble, we were used to having these kinds of conversations, and we had these networks of organizers that we kept in contact with virtually. It helps that there are only 12 teams within the WNBA — we all know each other and we all talk.

At the end of the day, a lot of this just came down to who we are. We are women athletes. Many of us are Black women. We are always judged more harshly and, within the world of sports, treated as the butt of the joke. And that’s made many of us more attuned to the injustice of the world. People will always judge us anyway — why not make our voices heard?

When the American season ends, many of us head abroad to Europe or Asia to play in leagues around the world. It’s always been striking to me when I speak to my teammates from other countries about what it feels like to be Black in America. Whether it’s run-ins with the police or backlash when we protest, we are treated differently. Many of my teammates are shocked when I tell them what we experience.

I have to be honest: I’ve always been a pretty introverted person. I’m not one to try and shake the trees with my words. But the past couple of years has changed everything. I no longer feel like I have a choice but to take a stand.

But my team and I are going to do it our way — with actions, not words. And this is how I plan to keep going.

—As told to Karen Turner

Elizabeth Williams is a player on the Atlanta Dream and secretary of the WNBA Players Union.