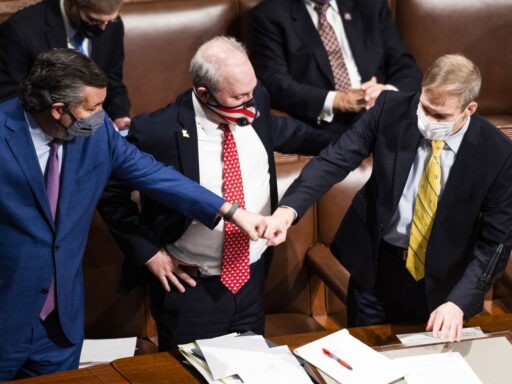 “I’m hoping we can come back together,” insist the very people who tore the country apart.

Republicans have spent the past two months lying about the election being stolen from President Donald Trump and refusing to acknowledge President-elect Joe Biden as the race’s winner.

But after thousands of Trump followers took what they were saying seriously and rioted last Wednesday at the Capitol, leaving five people dead — and as Trump faces impeachment for his role in inciting that riot — those same Republicans are trying to turn the page without any accountability for the role they played in poisoning the minds of their supporters.

“It’s not healthy for the nation,” Rep. Jim Jordan (R-OH) said Sunday on Fox News of Trump’s possible impeachment. “I’m very concerned about where we’re at. I’m hoping we can come back together.”

Jim Jordan says impeachment isn’t healthy for the nation and he hopes we can come together because he’s concerned about where we’re at pic.twitter.com/K3v2RUlmEN

Jordan, however, was one of the leading purveyors of misinformation about Trump’s loss to Biden being “stolen,” falsely claiming Biden’s win was the product of “shenanigans.” He was one of 139 House Republicans who voted on the day of the riots against accepting the results of the election. But following the violence, his dark insinuations about Biden’s victory have suddenly been replaced with pleas for everyone to turn the page.

Jordan’s talking point — that now is a time for healing instead of accountability — has emerged as the standard Republican response to the Trump riot.

“Our country is not just divided. We are deeply hurt,” tweeted House Minority Leader Kevin McCarthy (R-CA) last Friday, ignoring that he, too, spent November and December suggesting Biden’s victory was legitimate, and voted last Wednesday against accepting the election results. “Impeaching the President with just 12 days left in his term will only divide our country more.”

“We must come together and put this anger and division behind us,” added Sen. Ted Cruz (R-TX), who was one of eight senators to vote last Wednesday against certifying Biden’s victory, and who played a leading role in fomenting Trump followers in the hours ahead of last week’s rioting.

Here’s Ted Cruz inciting Trump fans the weekend before a riot that killed five, including the cop he’s tweeting about below pic.twitter.com/dlNEytlld4 https://t.co/PAe72qjN7v

“I don’t think anybody can look and say impeachment of this president is the thing that’s gonna help unite and bring our country together,” said Rep. Steve Scalise (R-LA), another Republican who refused to accept Trump’s defeat.

But perhaps the most shameless expression of this sentiment came from Rep. Darrell Issa (R-CA), who on Monday on Fox Business accused Democrats of “overplaying a lot of things, including the deaths of these people on Capitol Hill.” Issa is perhaps best known for leading Republican efforts during the Obama years to endlessly investigate a 2012 attack on a US diplomatic compound in Benghazi, Libya, that killed four.

“They’re overplaying a lot of things, including the deaths of these people on Capitol Hill” — Rep. Darrell Issa, who supported endless investigations into Benghazi (ht @KailiJoy) pic.twitter.com/z1adqYpN2n

Republicans: Give the rioters what they want or there will be more violence

Beyond hollow calls for healing, Republicans are trying to dodge accountability for last week’s riot by suggesting that efforts to impeach Trump could lead to more violence.

“In the spirit of healing and fidelity to our Constitution, we ask that you formally request that Speaker Nancy Pelosi discontinue her efforts to impeach President Donald J. Trump a second time,” a group of House Republicans who didn’t challenge the election results wrote to Biden last Thursday. “A second impeachment, only days before President Trump will leave office, is as unnecessary as it is inflammatory.”

That talking point has also gained traction on Fox News. On Monday, for instance, Fox & Friends host Brian Kilmeade said “this country is ready to explode,” which he cited as a reason for Pelosi and other Democratic leaders to “bring down the temperature a little, look to turn the page, be inclusive.”

In short, Kilmeade’s argument is that the rioters must be appeased, or there could be more violence.

Brian Kilmeade makes the right’s main argument against impeachment: “This country is ready to explode. You saw what happened. You see the anger that the 74 million people feel.” So “good leadership would bring down the temperature a little, look to turn the page, be inclusive…” pic.twitter.com/RILgPWRSsA

Fox News host Chris Wallace made a similar argument last Friday, saying that for Trump “to be removed from office either from within his administration or by Congress would only enrage [his supporters] further.”

What comments like those from Kilmeade and Wallace ignore, however, is the leading role Fox News played in misleading Trump supporters into believing the election was stolen — and that the network could play in, as Kilmeade suggested, bringing “down the temperature” by being honest with viewers that the election was not stolen. As Recode’s Peter Kafka put it, “Fox builds and starts bonfire, complains about flames and heat.”

Moving toward some sort of healing after last week’s violence is obviously an admirable goal, but part of that process involves acknowledging the factors that radicalized Trump supporters in the first place. And chief among them are the lies elite Trump supporters and right-wing media pushed to discredit Biden’s victory.

Until there’s an honest reckoning on that front, Republican talk of coming together and turning the page needs to be seen for what it is: a cynical attempt to avoid responsibility for tearing the United States apart in the first place.

The FBI, meanwhile, reports that armed protests are being planned at all 50 state capitols in the days leading up to Biden’s inauguration.

If Republicans and Republican-adjacent media outlets are serious about healing, a good place to start would be denouncing the election lies that motivate people who are taking up arms on Trump’s behalf. So far, they haven’t been willing to do that.

How Trump could blow up the NATO summit
Amy Coney Barrett refused to say if Trump can delay the election. The correct answer is he can’t.
Covid-19 vaccines are likely safe during pregnancy. When will we know for sure?
Sanders and Biden missed a major opportunity on a debate question on gender
Chuck Schumer wants to rename a Senate office building after John McCain
Why Covid-19 cases are surging in the UK