The best $30 I ever spent: A pair of toy mice for my daughter 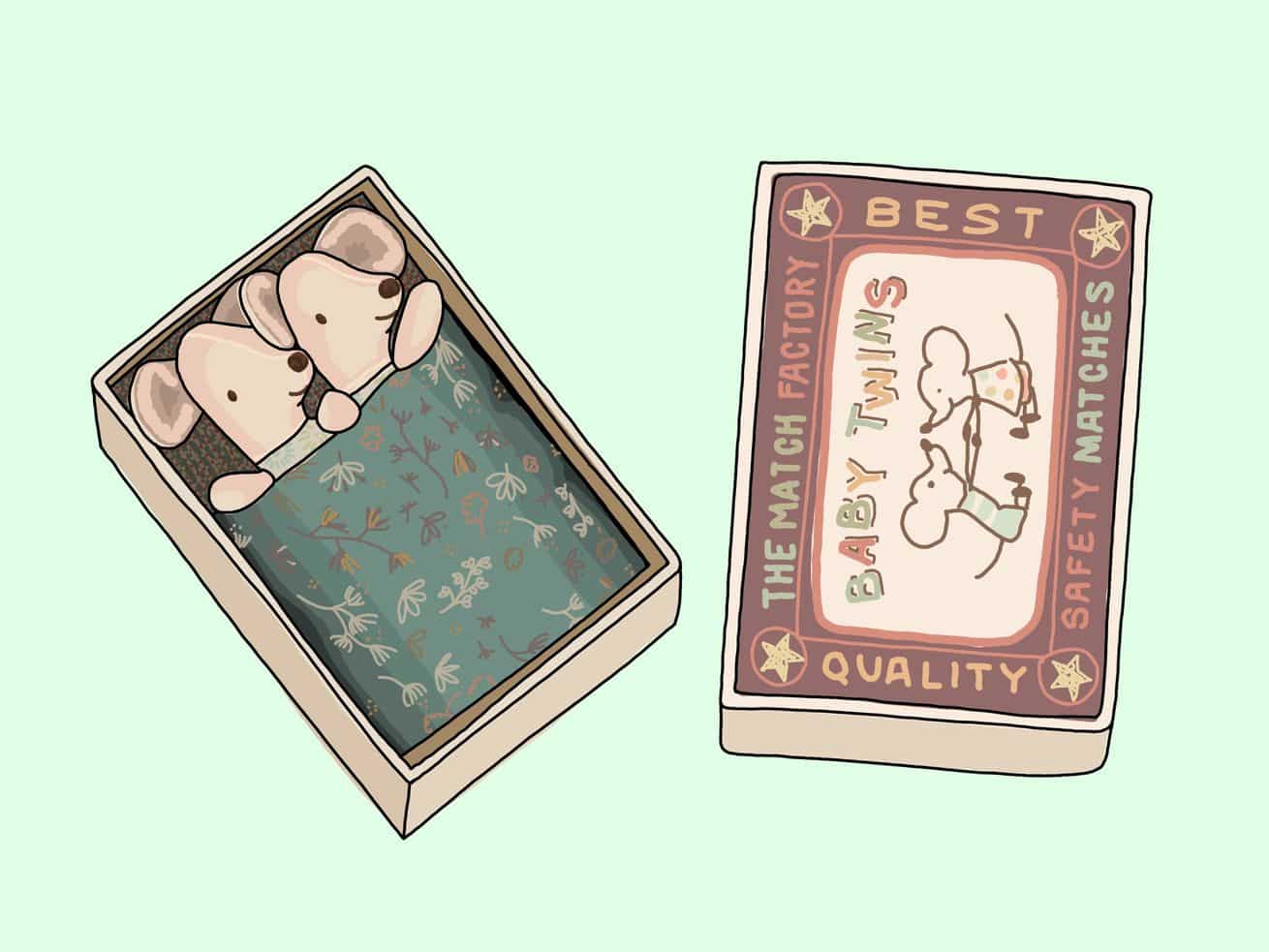 Constructing miniature worlds throughout the pandemic has made me regain some small sense of control.

This pandemic Christmas, I gave my 2-year-old daughter a matchbox that slides open to reveal a pair of toy mice. Made by a Danish toy company called Maileg, these matchbox mice had been following me in advertisements around the internet for months. I’d hesitated to buy them because $30 seemed steep for 3-inch mice, but I’m a sucker for Scandinavian aesthetics, and online reviews assured me of their quality craftsmanship. I ordered them from a local toy store, and they turned out to be my daughter’s favorite gift.

The rest of the holiday was challenging. We spent the day in back-to-back family video calls, all sad substitutes for time together in person, and my daughter melted down with screams of “No, no!” every time she saw the Zoom home screen. She spit out the herb-stuffed duck my husband had spent the day roasting. I was six months pregnant, heavy and fatigued, my body drained of fight. The next morning, my husband returned to the hospital for another series of 12-hour shifts as an emergency physician, leaving my daughter and me alone for an expanse of empty days extending into the new year.

The mice, small as they were, filled a large chunk of this time. My daughter played with them every day, and their matchbox was soon upgraded to a minimalist dollhouse I ordered from Ikea. We collected acorn caps on rainy walks for the mice to use as bowls and built them playgrounds, schools, libraries, and other features of our now locked-down city out of blocks.

After my daughter went to sleep at night, I’d collapse on the couch, go on Etsy, and browse miniatures. The options were endless, both vintage and handmade, and my nesting hormones perked up in a way they hadn’t since my first pregnancy. There wasn’t much nesting to be done this time around, as we already had baby things and would soon leave our San Francisco rental to move cross-country, but we had the space and money to accommodate, for example, a tiny LED lamp, a 5-inch nursery rug, and a dollhouse stroller made in East Germany in the 1960s.

The Cold War was a robust era for dollhouse furniture, modern and brightly colored, and the German pieces used a metric-based 1:10 scale that accommodated the Danish mice better than 1:12 American miniatures. I began fantasizing about outfitting the mouse house in GDR antiques until the stroller arrived and my daughter broke it within seconds.

I put the stroller on a high shelf with plans to glue it, which I still haven’t done. Instead, I look at it and wonder about its journey from behind the Iron Curtain to here. It connects our current shelter-in-place, for me, to past periods of restricted movement and personal agency, when the allure of smaller, more navigable worlds may become especially pronounced.

I read a chapter from Rachel Monroe’s book Savage Appetites about miniaturist-cum-forensic-scientist Frances Glessner Lee, who channeled her thwarted desire for an education and career into the Nutshell Studies of Unexplained Death, tiny crime scenes still used for forensics training today. Before Lee reappropriated the form, dollhouses had mainly been a way to introduce wealthy daughters like her to the domestic sphere that would encompass their lives. “Dollhouses are an almost too-literal example of these women’s shrunken ambitions,” Monroe writes, “of how, when you don’t have control over the big decisions shaping your life, you narrow your focus to a world that’s small enough to impose your will on it.”

I try not to take offense at this. It’s true that my world has become smaller, but so have many others, and the constraints of my situation are mostly temporary. Pandemics end; children grow up. I decided to stop feeling embarrassed about my late nights on Etsy and to embrace the mouse house as a way to bond with my daughter, whose days as an only child are limited and whose repetitive play can bore me to tears.

The mice let us play “together,” in a way. She has them take baths and go to the potty several hundred times, while I find them furniture solid enough to withstand her mandates and arrange it into the layouts I find most satisfying. I’m in a kind of fugue state, cut off from my adult identity, but I’m there with my daughter, and the mouse house is cleaner and calmer than any real home of mine will ever be.

The online algorithms that led me to the mice now show me stories about other people in lockdown creating miniature worlds. House Beautiful ran a feature, free from any mention of children, about the most stylish dollhouses of quarantine. I read about a woman who lost her job and, in a move unlikely to be widely applicable, began a new career renovating dollhouses. And along with several hundred thousand others, I was charmed by Kelly Victoria’s Twitter thread about her experience befriending a lonely little girl in quarantine through the latter’s “fairy garden.”

Victoria pretended to be a fairy named Sapphire, leaving the girl notes and presents until she had to move, at which point the two finally met in person under the pretext that “when fairies move houses, they grow to the size of a human being just for one day to move all their belongings.” I fantasize about the opposite, shrinking all our belongings down to fairy size for our move.

My mom, hearing about my new obsession, unearthed my childhood dollhouse from the basement where it’s been awaiting grandchildren. It’s too big to mail, but she sent pictures of the rooms, which evoke scenes from the Nutshell Studies of Unexplained Death, mini disaster zones with contorted dolls and broken furniture strewn everywhere. Despite the mess, these pictures brought me great delight; I scoured them in a fit of nostalgia and found a few salvageable pieces that my mom mailed.

The mouse family expanded to include parents, who moved into the miniature brass bed I played with as a child; the baby mice sleep in my little crib and playpen. The mouse house is so small that it does not take much for it to be fully furnished, at which point there’s little left to do but accessorize. I found tiny, readable copies of Corduroy and Goodnight, Moon, two of my daughter’s favorite books. She has the mice read them on the potty.

Maybe I was never ready to stop playing with dolls. I remember being reluctant to leave them behind, feeling the loss acutely when my peers became more interested in beauty and boys than in the imaginary worlds we used to create together.

I didn’t have many wholesome hobbies, like athletics or playing an instrument, to sustain me through adolescence, so reading, writing and mind-altering substances were some of the only ways I could recapture the freedom I felt in imaginative play. I bemoaned this fact recently to a friend, who pointed out that more traditionally masculine imaginative play, like model building or video- and role-playing games, is considered acceptable through adulthood in a way that playing with dolls is not. The reasons for this are obvious, the same ones behind our country’s childcare crisis, our national devaluing of “women’s work.”

I hope my daughter won’t experience the same kind of loss of self I did in adolescence, that she’ll find ways to work and play that bring her joy and fulfillment through adulthood. Child development experts seem to emphasize the importance of play more than they did when I was a kid and “small world play” in particular as a way for children to process new experiences from the larger world.

My daughter is using the mice to process potty training, for example, and going to preschool, which she now does three mornings a week. She has a hard time at drop-off, which happens outside since parents are not allowed in the school during the pandemic, and so the mice get dropped off and picked up outside their school of blocks again and again.

Clearly, I’m using the mice to process some things, too. Moving cross-country with a toddler and newborn is still hard for me to fathom, but I’m comforted by how easy it will be to pack up the mice, their entire world inside one cardboard box. My first birth was difficult, and I have no idea how this next one will go, but I can already imagine my daughter and her little sister crouched together in front of the mouse house in some future home we haven’t found yet.

Parenthood has turned out to be more tedious than I imagined, negotiating with a toddler far more difficult, but after I wrestle my daughter into bed each night, I return to the living room to tuck in the mice, and they stay in their beds and are quiet, and I feel like maybe I’m doing okay at this mom thing.

It’s beginning to feel like spring in San Francisco. The new baby is due in April, and we’ll move to Massachusetts in June. Playgrounds are open, and my husband and our parents have gotten the Covid-19 vaccine. My daughter and I have been spending less time, lately, with the mice. She has a new favorite game, called simply “boat,” which requires mercifully little of me. I sit on the floor with my legs in a V, and she sits between them, propped against the globe of my belly. She rides this vessel across an imaginary body of water to another shore. “We made it,” she says then, and disembarks.

Caitlin Kindervatter-Clark writes fiction and nonfiction. Her work has appeared in the Washington Post, MQR, Prairie Schooner, and elsewhere.