The big difference in 2020 health plans isn’t among Democrats 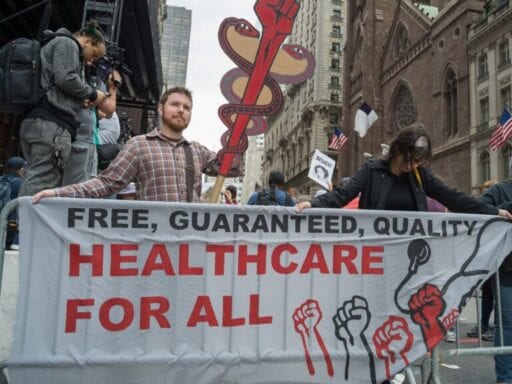 Republicans want to roll back Obamacare as Democrats debate Medicare-for-all.

But next year, by the time the general election campaign rolls around, the important distinction on health policy will be between a Democratic agenda of expanding health coverage through increased government spending and a Republican plan to dramatically deregulate health insurance and shrink the government’s role in guaranteeing health care.

The stark differences between the two parties were laid bare in a new white paper last week from the Republican Study Committee, an internal think tank for House Republicans. The paper laid out the conservative agenda for health care reform: roll back Obamacare’s insurance rules requiring comprehensive health insurance and replace them with high-risk pools and tax breaks for individual health care expenses.

The plan would turn the Affordable Care Act’s funding for private insurance subsidies and Medicaid expansion, which had helped bring the uninsured rate to historic lows, into a block grant for states. The traditional Medicaid program would also be subject to spending caps for the first time.

The result: Fewer people would have comprehensive health insurance. The protections for preexisting conditions would be weaker. More of the responsibility for paying for health care would fall on individuals and the states.

The new plan isn’t legislative text and therefore can’t be precisely analyzed, but the proposal closely resembles the 2017 Graham-Cassidy plan to replace Obamacare. The Congressional Budget Office said that plan would have meant “the number of people with comprehensive health insurance that covers high-cost medical events would be reduced by millions” and that it would cut federal health care spending by $1 trillion over 10 years.

Democrats are debating whether to have the federal government provide health insurance to every American or just to many more of them than it does now. Republicans want to shrink both the federal government’s obligation to ensure coverage and its spending to support it. Democrats will likely set their differences aside in the general election and run fiercely against the GOP agenda, a playbook the party thinks led to its sweeping wins in the 2018 midterms.

Public sentiment is actually with the Democrats. Asked if the government has a responsibility to make sure all people have health insurance, 56 percent of Americans said yes and 42 percent said no in Gallup’s most recent test of the question — up from 47 percent yes and 50 percent no in 2009 and 2010, the heydey of the Obamacare debate.

This is arguably the most important political success of the Affordable Care Act. The new Republican plan reveals the conservative vision for health care still rests on challenging this notion, arguing that health care should be an individual responsibility rather than a government guarantee.

The RSC plan ends or weakens some of the central provisions in Obamacare, including:

Because of these weakened rules, people with expensive medical conditions might struggle on their own to afford insurance benefits that meet their needs. So the RSC plan sets up federal funding for state-administered “guaranteed coverage pools” — high-risk pools, as they are more commonly known, funds that subsidize insurance or services for expensive patients.

The problem with high-risk pools historically has been that they are poorly funded. The RSC paper floats a $17 billion annual allocation, far less than what would likely be needed: An estimate from the Urban Institute projects that for comprehensive ACA-like coverage, the cost would be between $37 billion and $56 billion. The Republican plan doesn’t even provide the level of funding Urban says would be needed to match the level of coverage typical of pre-Obamacare high-risk pools, $25 billion to $30 billion.

The RSC proposal also would not create a federal backstop in the event a state decides not to set up a guaranteed coverage pool. People with expensive conditions could be at risk of being unable to find affordable quality coverage if their state declined to take the federal money.

In addition, the enhanced federal funding for Medicaid expansion (which has covered 20 million people through Obamacare) would be reduced. All of Medicaid’s funding, for both traditional and expansion populations, would eventually be converted into block grants. The funding for traditional populations — pregnant women, children, the elderly, the disabled — would continue to flow through Medicaid but under a new spending cap.

The expansion money, combined with the ACA funding for private insurance premiums for lower-income people, would then be used for state programs to cover low-income individuals, and the RSC plan mandates that half of it be spent subsidizing private insurance.

The new proposal shares the same ideological framework that has informed the Trump administration’s agenda, including regulatory rollbacks and work requirements for Medicaid. It would cut Medicaid spending dramatically and reduce premiums on private insurance through deregulation, allowing insurers to provide less-comprehensive, cheaper coverage than they do now. The monthly payment people pay to carry insurance could indeed go down, but these plans would also provide less financial security against major medical bills.

“This is about ideological opposition to regulation,” Levitt says, “and a desire to point to something that reduces premiums, if not costs.”

That’s also why the GOP is fixated on health saving accounts, another plank in the RSC proposal, which allow people to pay for individual health insurance and medical services with untaxed savings. These accounts would largely favor people with higher incomes, who have either disposable income to put money in reserve or who work for a company willing to make contributions to an HSA.

Republicans are sensitive to the political power of preexisting conditions and they’ve tried to craft a plan that fits their deregulatory ethos without completely eliminating safeguards for people who are sick. But this plan does not provide the same ironclad protections for preexisting conditions or financial security that Obamacare does.

Democrats, squabbling over Medicare-for-all, have moved onto a bigger government role in providing health care. Republicans are still trying to figure out how to repeal Obamacare.