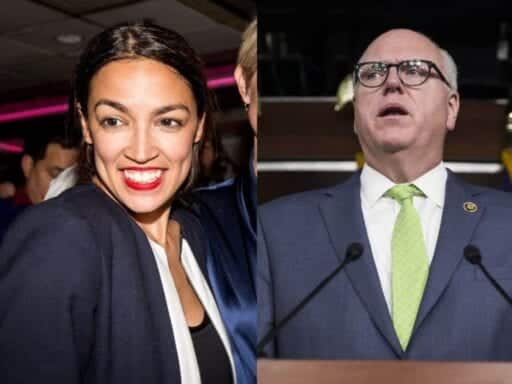 Joe Crowley is still on the ballot in New York’s 14th Congressional District. Alexandria Ocasio-Cortez wants him off.

It all centers on Crowley’s name lingering on the ballot for New York’s 14th Congressional District as the nominee for a different party: the Working Families Party, who endorsed him in the primary.

A candidate being the nominee for two different parties is not unusual in New York politics, but now, Ocasio-Cortez is publicly accusing Crowley of mounting a third-party challenge to her, something he vociferously denies.

Ocasio-Cortez said Crowley “stood me up” for three different calls where he was supposed to concede. “Now, he’s mounting a 3rd party challenge against me and the Democratic party- and against the will of @NYWFP,” she wrote.

.@repjoecrowley stated on live TV that he would absolutely support my candidacy.

Instead, he’s stood me up for all 3 scheduled concession calls.

Now, he’s mounting a 3rd party challenge against me and the Democratic Party- and against the will of @NYWFP.https://t.co/Xvb6Jk8N8q

Crowley soon fired back with his own tweet, saying Ocasio-Cortez’s team is the one that’s been missing the phone calls.

“I’ve made my support for you clear and the fact I’m not running,” Crowley said. “I’d like to connect but I’m not willing to air grievances over Twitter.”

Alexandria, the race is over and Democrats need to come together. I’ve made my support for you clear and the fact that I’m not running. We’ve scheduled phone calls and your team has not followed through. I’d like to connect but I’m not willing to air grievances on Twitter. https://t.co/hxEeWEpI2O

Still, it’s true that Crowley’s name is remaining on the ballot, much to the chagrin of Ocasio-Cortez and the Working Families Party. He says that’s because of the legal hoops he’d have to jump through to remove his name, and one elections law expert Vox talked to agreed there would be obstacles.

No matter what Crowley does, it’s clear that, even though Crowley dedicated a performance of “Born to Run” to his opponent on election night, all is not smoothed over between one of New York’s old guard and its new insurgent, rising star.

“So much for ‘Born to Run,’” Ocasio-Cortez tweeted on Thursday.

What the law says about removing names from the ballot

The process to remove candidates from the New York ballot once a candidate has received a party’s nomination is complex.

Crowley won the Working Families Party nomination, despite losing the Democratic one. After Ocasio-Cortez won, WFP wanted to put her on their ballot line for the November election, and asked him to vacate. But to remove him as their nominee from the ballot, the Working Families Party would essentially have to nominate Crowley for another position on the ballot — and he’d have to accept.

“If they nominated for him the Assembly or the state Senate or an office like that, and he consented to it, he could get off the ballot,” said New York-based election lawyer Jerry Goldfeder in an interview with Vox.

In a state with so many third-party candidates, this can be confusing. In fact, Ocasio-Cortez recently received the write-in nomination to be the Reform Party candidate … in a completely different district she wasn’t running in.

As the New York Times’s Lisa W. Foderaro pointed out, the thinking here would be for WFP to nominate Crowley for a seat that he’d have little-to-no chance of winning, “like a county clerkship in a region of the state dominated by the other party.” Some positions don’t have residency requirements, and a lawyer for the Working Families Party says it should be easy for Crowley to do this.

“I respect Congressman Crowley’s concerns, but there are common, straightforward and legal ways to remove candidates from the ballot in cases like this,” said WFP counsel Alex Rabb in a statement. “There are offices around the state for which the Congressmember could be nominated. The New York State Court of Appeals has found that it is standard for parties to substitute candidates after a primary election, and that the practice does not violate the letter or the spirit of the law.”

“And sometimes, like Joe Crowley, they say, ‘that would be a fraud on the voters and I’m not going to do that, so relax,’” the elections lawyer added.

Tensions are running high between Crowley and the WFP

Beyond running for another office that he has no intention or desire to win, Crowley’s other options (as he pointed out in a tweet) are to move out of state, die, or receive a criminal conviction.

“I don’t plan on moving out of New York, have a clean record, hope God’s will is that I don’t die, and won’t commit what I honestly believe to be election fraud,” Crowley said.

I don’t plan on moving out of New York, have a clean record, hope God’s will is that I don’t die, and won’t commit what I honestly believe to be election fraud. https://t.co/Cxk3s5zALi

This all appears to be aggravating the Working Families Party, who is supporting Ocasio-Cortez in the run-up to the fall election (she is almost certain to win, given how blue the district is) even though they endorsed Crowley in the primary, and relations between the two seem to have frayed.

“The only remaining way for Crowley to do the right thing is to switch his residency to Virginia, where his family resides and his children already go to school,” Lipton said. “It would fix the problem he created in an instant. Queens County Democrats practically wrote the book on election law, so it’s hard to imagine they don’t know that there are standard procedures to remove a candidate from the ballot that have been approved by the New York State Court of Appeals.”

In the meantime, the party’s hands are tied, because it’s entirely up to Crowley to decide what he wants to do next.

“It requires his participation, we can’t do it without him,” said Working Families Party spokesperson Joe Dinkin. “He has to agree to it to be removed from the ballot.”

House Democrats’ top priority if they win in November is a sweeping anti-corruption bill
Why Facebook is “the front line in fighting hate today”
Trump thinks immigration is his party’s winning issue in midterms. The polls aren’t so sure.
Vox Sentences: O-H uh-oh
Democrats want to challenge Trump’s foreign policy in 2020. They’re still working out how.
A detailed timeline of all the ways Trump failed to respond to the coronavirus