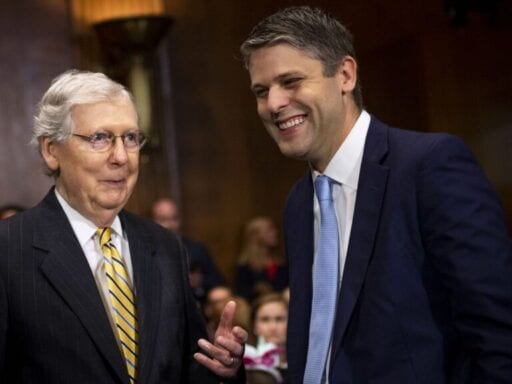 If you want to be taken seriously as a judge, maybe don’t use your opinion to list the names of Democrats who were in the Klan?

Judge Justin Walker, a very recent 38-year-old Trump appointee to a federal court in Kentucky, begins his opinion in On Fire Christian Center v. Fischer — a case brought by a Christian minister that claims the center was preventing from hosting an Easter service — as if he is the only thing protecting civilization from a cartoonishly evil tyrant.

“On Holy Thursday, an American mayor criminalized the communal celebration of Easter,” Walker begins. adding that “that sentence is one that this Court never expected to see outside the pages of a dystopian novel, or perhaps the pages of The Onion.”

Not long after Walker tossed this grenade into a brewing culture war, serious doubts emerged that the attack on Easter that the judge warned of actually ever existed. At the very least, it is fairly clear that Walker did not take some basic steps to ensure that the facts of this case are what Walker claimed that they are.

The case involves Louisville, Kentucky, Mayor Greg Fischer’s efforts to keep individuals from spreading the coronavirus. On Fire Christian Center wished to hold drive-in Easter services. It claims that parishioners would be required to remain in their cars, and that the pastor and other church employees would be appropriately socially distanced from the parked worshipers. Nevertheless, On Fire claimed that Fischer attempted to shut down these services.

After seeking relief in federal court, On Fire wound up before the unusually pugnacious conservative Judge Walker.

Walker has lived a charmed life for a man only 38 years of age. A former intern to Senate Majority Leader Mitch McConnell and law clerk to future Supreme Court Justice Brett Kavanaugh, Walker has never tried a case and was confirmed to the federal trial bench despite the American Bar Association’s determination that he is “not qualified” for the job. Then, just months after Walker began his current job, President Trump nominated him for the United States Court of Appeals for the District of Columbia Circuit, arguably the second-most-powerful court in the country.

Much of Walker’s opinion in On Fire is devoted to largely irrelevant history about pilgrims (“according to St. Paul, the first pilgrim was Abel”) and even more irrelevant reminders that, in the past, some prominent Democrats were members of the Ku Klux Klan (“just over three decades ago, another ex-Klansman was the Majority Leader of the United States Senate”). Walker does not turn to the facts of the On Fire case until page seven of his opinion.

There, only after he juxtaposes tales of slaves being beaten for “attending prayer meetings” alongside reminders that some long-dead Democrats were once Klansmen, the judge describes what he claims to be the dispute at the heart of this case: A Christian ministry wanted to hold a kind of drive-in Easter Sunday service, where parishioners would remain in their cars and social distancing guidelines will be respected, but Fischer, a Democrat, issued an order that bans such services.

If Walker is correct about what is actually at stake in this case, then he is most likely correct that Fischer may not forbid this ministry from holding Easter services under these very limited conditions. But it is far from clear that Walker accurately described the facts of this case. And even if he did, his opinion reads less like a judicial decision and more like a screed against Democrats published in an outlet like Breitbart.

This is indicative of a pattern that seems to be emerging among many of Trump’s appointees to the federal bench. Judges throughout the federal bench appear to be auditioning for higher jobs by broadcasting their conservative credentials, even when such auditioning requires them to write sloppy or poorly reasoned opinions.

Walker may have misrepresented the facts of this case.

In order to challenge a government action in federal court, a plaintiff must show that they were injured in some way by that government action, and that injury has to be more than speculative.

Which brings us back to the On Fire case. Walker claims that “Louisville has targeted religious worship by prohibiting drive-in church services,” but it’s not at all clear that such prohibition exists.

Mayor Fischer, for his part, says that he “attempted twice to contact the court” so that he could “present evidence that would have demonstrated there has been no legal enforcement mechanism communicated” regarding the drive-in services that were supposedly being banned.

If the city wasn’t enforcing any kind of ban against drive-in services, or if it would have only enforced a ban on services that violated social distancing guidelines, then the apocalyptic dispute Walker describes in his opinion simply doesn’t exist.

As Josh Blackman, a conservative law professor, wrote at the Volokh Conspiracy, if Walker had “held a 15 minute telephonic status conference,” meaning if Walker had simply called the lawyers on both sides of the case and allowed Fischer’s attorneys to explain what was going on, “any doubts about the proposed enforcement could have been resolved.” The judge likely would have determined that no court order was necessary because there was no real dispute between the two parties.

The particular court order On Fire Christian Center sought from Walker is known as a “temporary restraining order,” which is a form of very short-term relief that judges may hand down without speaking to the opposing party — at least in rare emergencies where time is of the essence.

But in this case, On Fire requested its temporary restraining order on Friday, and Walker did not rule on it until Saturday. Walker appears to have spent the intervening day writing a 20-page opinion and order and researching details about Plymouth Colony Gov. William Bradford’s views about pilgrims and St. Paul, rather than holding a brief phone call with Fischer’s lawyers.

Walker appears to be “auditioning” for a higher job

When I speak to sitting judges, I frequently hear them use a derisive word for the kind of opinion Walker handed down in On Fire: “auditioning.” To audition is to loudly and proudly advertise your conservative views in the hopes that you will be nominated to a higher court — or maybe even to the highest Court.

These judges may have learned to behave this way from a very high-profile role model: Justice Neil Gorsuch. As the 2016 election drew close, then-federal appellate Judge Gorsuch behaved like he was actively campaigning for a promotion.

At the time, the conservative Federalist Society, which plays a significant role in choosing Trump’s judicial nominees, was loudly signaling that it wanted judges and justices who would limit federal agencies’ power to create binding regulations. So Gorsuch started writing gratuitous opinions laying out the new limits he would impose on federal agencies. In one case, he even attached a separate concurring opinion to his own majority opinion.

As David Kaplan reports in The Most Dangerous Branch: Inside the Supreme Court’s Assault on the Constitution, these opinions were “a way for Gorsuch to call attention to himself, and it worked.” Kaplan writes that one of the future justice’s anti-regulatory opinions “proved decisive in clinching” the Trump White House’s decision to name Gorsuch to the Supreme Court.

Auditioning seems to be an increasingly widespread practice among Trump judges with Supreme Court ambitions, and why wouldn’t it be? By selecting Gorsuch, Trump signaled that he is prone to reward judges who display their most conservative views like a peacock seeking a mate.

There are also some signs that the youngest group of these judges are combining a writing style more typically associated with conservative media with their ostentatious displays of conservatism. Gorsuch is often derisive of his colleagues’ views in his judicial opinions, but his writing style is fairly academic. Indeed, shortly after he joined the Supreme Court, his turgid prose inspired the mocking hashtag #GorsuchStyle.

To put it mildly, judges — not even Gorsuch — typically do not use their judicial opinions to suggest that the Democratic Party is actually the party of the KKK.

Yet Walker is not alone with his unusually harsh writing style. Late last month, Judge Brantley Starr, a 41-year-old Trump appointee to a federal court in Texas, wrote an opinion in an important guns case that is as larded down with unprofessional swipes at the Justice Department’s lawyers as it is with historical errors about the way 19th-century judges understood a particular legal term.

This kind of behavior is unfortunate because judges are supposed to follow the law, not use their opinions as a vehicle to demonstrate how snarkily they can own the libs. If Walker or Starr wanted a job as a conservative commentator, they picked the wrong career.

But it is also unfortunate for another reason. Setting aside the question of whether Walker decided a made-up case in On Fire, he is correct on the merits that, at least in Kentucky, a city mayor may not ban drive-in church serves so long as those services adhere to social distancing guidelines.

Judges are often called on to resolve tense disputes between ordinary citizens and powerful officials, sometimes in cases where many lives are on the line. We trust judges with this power because we expect them to do so in a way that is both nonpartisan and primarily concerned with the law. And government officials obey those decisions because they also trust that the judge is motivated by something more than pure politics or personal advancement.

But if judges do not hold up their part of this bargain — if they behave in a transparently partisan way, or if they place their desire for career advancement before their obligations to the law — then they undercut the basic claim that we should obey judges at all. They also invite defiance from government officials.

As Alexander Hamilton wrote in the Federalist Papers, “the judiciary … has no influence over either the sword or the purse; no direction either of the strength or of the wealth of the society; and can take no active resolution whatever. It may truly be said to have neither FORCE nor WILL, but merely judgment; and must ultimately depend upon the aid of the executive arm even for the efficacy of its judgments.”

By transforming a legal dispute into another battle in the culture war, Walker undermined his own authority. And he undermined the judiciary itself.

The Paris climate pact is 5 years old. 5 youth activists share their hopes for what’s next.
Colorado baker who refused to serve gay couple now wants to refuse to serve transgender person
On TikTok, who owns a viral dance?
South Korea just changed a longstanding military law for the sake of BTS
It sure looks like Trump’s national security adviser is campaigning for him in swing states
Democrats back down from calling witnesses at Trump’s impeachment trial