The coronavirus will cause a child care crisis in America 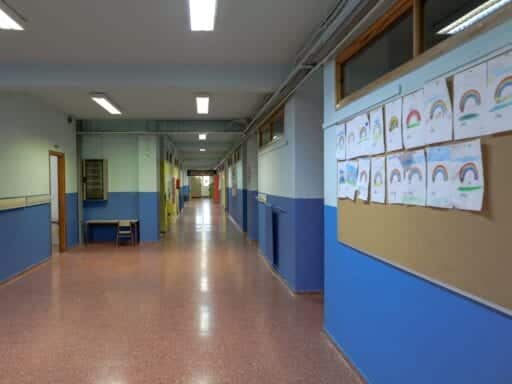 Empty hallway at a school in Madrid, Spain, one day before the temporary closure of nurseries, schools, and universities throughout the region to prevent the spread of the coronavirus on March 10, 2020. | Europa Press via Getty Images

As schools close and parents lack paid leave, who will take care of the country’s kids?

Elk Grove Unified School District in northern California is closing for at least a week. Northshore School District in Washington state is shutting its doors for up to two. Meanwhile, public schools in Scarsdale, New York, are shut down until March 18.

As of Tuesday, 621 K-12 schools around the country have closed in response to the growing coronavirus outbreak, according to Education Week.

The closures come as a means to fight the spread of the virus, often (though not always) after a parent or other community member tests positive. The impact on day care centers, preschools, and other early childhood education and care providers is harder to measure, since facilities tend to be smaller and many are privately run. But at least one preschool has closed in California, and more are likely to follow.

When schools are closed unexpectedly, whether it’s for something as simple as a snow day or as new and uncertain as the coronavirus, “lots of families are left scrambling,” Aaron Pallas, a professor of sociology and education at Columbia University’s Teachers College, told Vox.

For kids, a school closure means lost learning time, which can have long-term effects. In some cases, it can also mean going hungry, since many kids across America — including about 70 percent of students in New York City — rely on free or reduced-price lunch programs at their schools.

Meanwhile, for parents, a school closure can mean taking time off work to care for kids — except that many jobs don’t offer paid time off. That means parents can lose pay for the days they don’t work, or even lose their jobs entirely. And while working from home is a possibility for some parents, many jobs can’t be done remotely — cleaning hospitals and other facilities, for example, or putting out fires — and it’s not always possible to care for a child while working at the same time.

Like so much about the coronavirus outbreak, school closures are highlighting larger social problems as well as creating immediate problems for many of the most vulnerable people in society. In this case, it’s the need for improvements to the child care system in America so that parents aren’t left without options when schools close. And, perhaps most of all, it’s the need for paid leave — not just for sick people, but for those caring for others, whether they’re children, older people, or anyone in need of extra support.

As Taryn Morrissey, a professor of public administration and policy at American University, put it, when it comes to coping with this outbreak and preparing for future crises, “paid sick leave and paid family leave are key.”

When schools and day cares are closed, it affects kids — and their whole families

Closing schools can be a necessary precaution to keep students, teachers, and families safe if someone in the school community is infected with the coronavirus, according to the CDC. Though the virus is thought to be less severe in children, it can spread to adults and people with underlying conditions that make it more dangerous. Meanwhile, some are advocating for preventive closure of most schools regardless of whether someone has tested positive.

But closing schools and child care centers comes with its own set of problems. New York City is a good example. Earlier this month, Richard A. Carranza, the chancellor of the city’s schools, said they would only close as a “last resort,” according to the New York Times, because so many students — including about 114,000 who are homeless — rely on them for food, health care, and even a place to do laundry.

Those needs are mirrored around the country, where 1.36 million students were homeless as of the 2016-2017 school year. Meanwhile, about 30 million students in the US qualify for free or reduced-price lunch at school. For families living in poverty, “the closure of the school makes those kinds of supports less accessible,” Pallas said.

Meanwhile, when schools are closed, parents are faced with a question, he added: “Who’s going to watch their young kids?”

Some parents have little choice but to take time off work to take care of their children. But as of 2018, one in three private-sector workers, and seven in 10 low-wage workers, lacked paid sick days, according to the National Partnership for Women & Families. And even those with paid sick days may not be allowed to use them to care for a family member.

So for a lot of families, school closures mean “there’s a risk that parents will lose income, which of course then affects the wellbeing of the family,” Pallas said. That may be especially true if schools are closed for a long period of time, and if parents lose their jobs or are forced to quit to care for a child.

Some parents may be able to work from home and supervise their children at the same time, but many jobs don’t allow for that — bus drivers and hospital workers, Pallas noted, can’t exactly work remotely. What’s more, taking care of very young children, or older children with special needs, can make work impossible. For some kids, “even if you have the option to work from home, that child requires care,” Morrissey said.

Meanwhile, the closure of schools and other facilities raises questions of pay and leave for those who work with children. While public school teachers will likely still be paid if schools close, the picture is less clear for early child care workers, who already make just $10.82 an hour on average, about a third of what elementary school teachers make.

In New York City, workers at publicly funded child care facilities will be paid even if the facilities shut down, said Andrea Anthony, executive director of the Day Care Council of New York, an organization representing publicly funded facilities. But at privately funded centers supported by parents’ fees, it’s unclear what will happen, she said.

“We haven’t encountered something like this,” Anthony said. “It’s just very unpredictable.”

To mitigate the effects of school closures, the country needs big structural changes

Overall, it’s clear that the coronavirus outbreak is already bringing with it a child care crisis for many of America’s families. In the short term, solutions are somewhat difficult to come by.

Group child care arrangements can be a solution to school disruptions, Pallas said, but in this case, when many people around the country are being discouraged from congregating in groups, that’s not an ideal fix. Moreover, the country doesn’t really have systems in place to facilitate such arrangements.

Working parents with small children have been sharing tips on how to work from home with kids, if you have that option. Journalist Lyz Lenz recommends podcasts, simple toys and games (“pipe cleaners and tape don’t ask just hand them over”), and acceptance (“it’s always gonna be a mess and suck there is no secret”).

So for the first six years as a parent I worked from home with babies and I want to say few things…1. It’s totally okay to just let them play unstructured, it’s fine! Let them be!

For parents of older children who want to help them keep up with learning, Pallas recommends home-schooling networks, which may have resources for parents to give lessons.

Many school districts are discussing or experimenting with online learning, but that requires children to have access to a computer at home, something not every family has. And it still requires supervision. “You give a kid a laptop, they’re not likely to be spending their time doing academic stuff” unless an adult is keeping an eye on things, Pallas said.

Ultimately, coping with the fallout of this outbreak — and preparing for the next major disruption in school and child care — will require structural changes, experts say. For example, “we need to invest more in the child care system,” so that families have more backup options in case their primary source of care falls through, Morrissey said.

And people need paid time off to care for themselves and others. That includes paid leave for child care workers themselves, many of whom currently don’t have access to it.

Some states, like New York and Washington, have instituted paid family leave programs in recent years. And other countries around the world are taking steps to help parents whose child care arrangements have been affected by the epidemic — France, for example, is offering 14 days of paid leave to parents whose children must be isolated, according to the New York Times.

Meanwhile, some are advocating that any economic bailout in the US related to the coronavirus could include investment in America’s child care infrastructure, since the availability of child care supports so many other industries. Indeed, child care investment has become an election issue, with a number of Democratic candidates unveiling ambitious plans to make child care more affordable while boosting the wages of workers. Sen. Bernie Sanders, for example, released a plan last month to provide free child care to all who need it (former Vice President Joe Biden has yet to release a child care plan, though he has called for universal preschool).

The sector I study — the child care market — has a great case for direct government investment in the event of a Coronavirus-related bailout.

Their employment enables the continued employment (and the associated tax revenues) of millions of parents. https://t.co/JZtIrjkwIm

Overall, “it’s terrible that it takes a crisis like this to get us thinking about” reforms like paid family leave, Pallas said, “but that’s certainly an area where there’s a lot of room for development.”