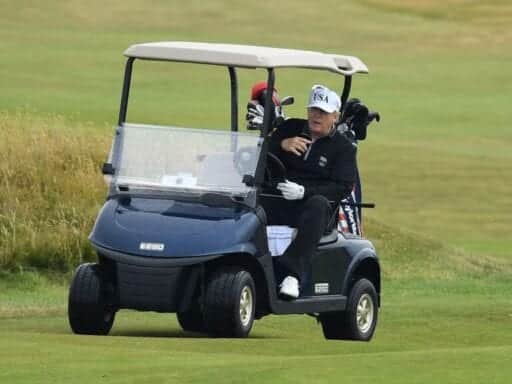 Share
Loading...
President Donald Trump plays a round of golf at one of his resorts during his first official visit to the United Kingdom on July 15, 2018, in Turnberry, Scotland. | Leon Neal/Getty Images

President Donald Trump is still defending the White House’s decision to host next year’s G7 summit, a gathering of seven world leaders, at a Miami resort owned by Trump’s business — even though he abandoned the plan after it was widely criticized.

At a Cabinet meeting on Monday, he blamed the backlash against his attempt to profit from the G7 on “you people with this phony emoluments clause,” referring to a provision of the Constitution which prevents federal officials from being compensated by foreign governments.

The crux of Trump’s argument is that other presidents have conducted business while they were in the White House, so why can’t he?

He claimed, without evidence, that President Obama may have negotiated “a deal for a book” or “a deal with Netflix” while still in office. (The book deal was announced in March 2017 and the Netflix deal in May 2018.) He also claimed that George Washington “ran his business simultaneously while he was president.”

Trump’s remarks, moreover, suggest that he does not understand what the emoluments clause permits and what it forbids.

Trump appears to believe that he’s being attacked for conducting personal business while he’s also serving as president. But the Constitution forbids something much more specific— and Trump’s attempt to host foreign leaders at his personal resort is a pretty clear-cut violation.

What is the emoluments clause?

The Constitution includes a few provisions that are sometimes described as “emoluments” clauses. One such provision, sometimes referred to as the “foreign emoluments clause,” provides that “no Person holding any Office of Profit or Trust under [the United States], shall, without the Consent of the Congress, accept of any present, Emolument, Office, or Title, of any kind whatever, from any King, Prince, or foreign State.”

Another provision, which is sometimes referred to as the “domestic emoluments clause,” provides that the president shall receive “a Compensation” for his services, and shall not receive “any other Emolument from the United States, or any of [the several states].”

The meaning of the word “emolument” is contested in litigation challenging Trump’s alleged violations of both the foreign and the domestic clause. But most dictionaries from the era of the US’s founding define the word broadly. John Mikhail, a Georgetown law professor, looked at 40 different dictionaries published between 1604 and 1804 to try to determine how the word was understood at the time of the Constitution’s framing. He found that 37 of those 40 dictionaries give it a meaning that “would encompass sort of the profits of ordinary market transactions.”

Nearly all of these dictionary definitions, according to Mikhail’s research, encompass words like “profit,” “advantage,” or “gain.”

Thus, if a federal official owns a resort, and they host a diplomatic summit with foreign leaders at that resort, that would likely violate the foreign emoluments clause: If Trump hosted the G7 at his own resort, he would be earning a profit from a foreign state and its leaders.

Similarly, even if Trump were correct that President Obama negotiated a business transaction with a publisher or with Netflix while in office, neither transaction would violate the Constitution. The foreign emoluments clause forbids the president from profiting off foreign governments, and the domestic emoluments clause limits the president’s ability to profit off of either the federal government or a state government. But neither Obama’s book publisher nor Netflix is a foreign or domestic government.

There is a reason the Constitution singles out transactions with foreign governments as forbidden. As Alexander Hamilton explained in the Federalist Papers, “one of the weak sides of republics, among their numerous advantages, is that they afford too easy an inlet to foreign corruption.” In a monarchy, the chief executive shares an identity with the state, so a king or queen “has so great a personal interest in the government and in the external glory of the nation, that it is not easy for a foreign power to give him an equivalent for what he would sacrifice by treachery to the state.”

But in a republican state, where leaders serve temporarily and keep their finances separate from that of the nation, “persons elevated from the mass of the community, by the suffrages of their fellow-citizens, to stations of great pre-eminence and power, may find compensations for betraying their trust.”

The framers, in other words, believed that federal officials would be uniquely vulnerable to the corrupting influence of a foreign state. The foreign emoluments clause offers a shield against that corruption — assuming that it is enforced.

Why some police departments are dropping their body camera programs
Nobody’s buying clothes right now. So stores are filing for bankruptcy.
Mayor de Blasio and Gov. Cuomo clash over reopening NYC schools
“That’s not the truth, Ellen”: How Dakota Johnson won her birthday feud against Ellen DeGeneres
These AI-generated coronavirus memes are better than human-generated ones
The PPE shortage in America is a crisis — here’s a realistic plan to solve it