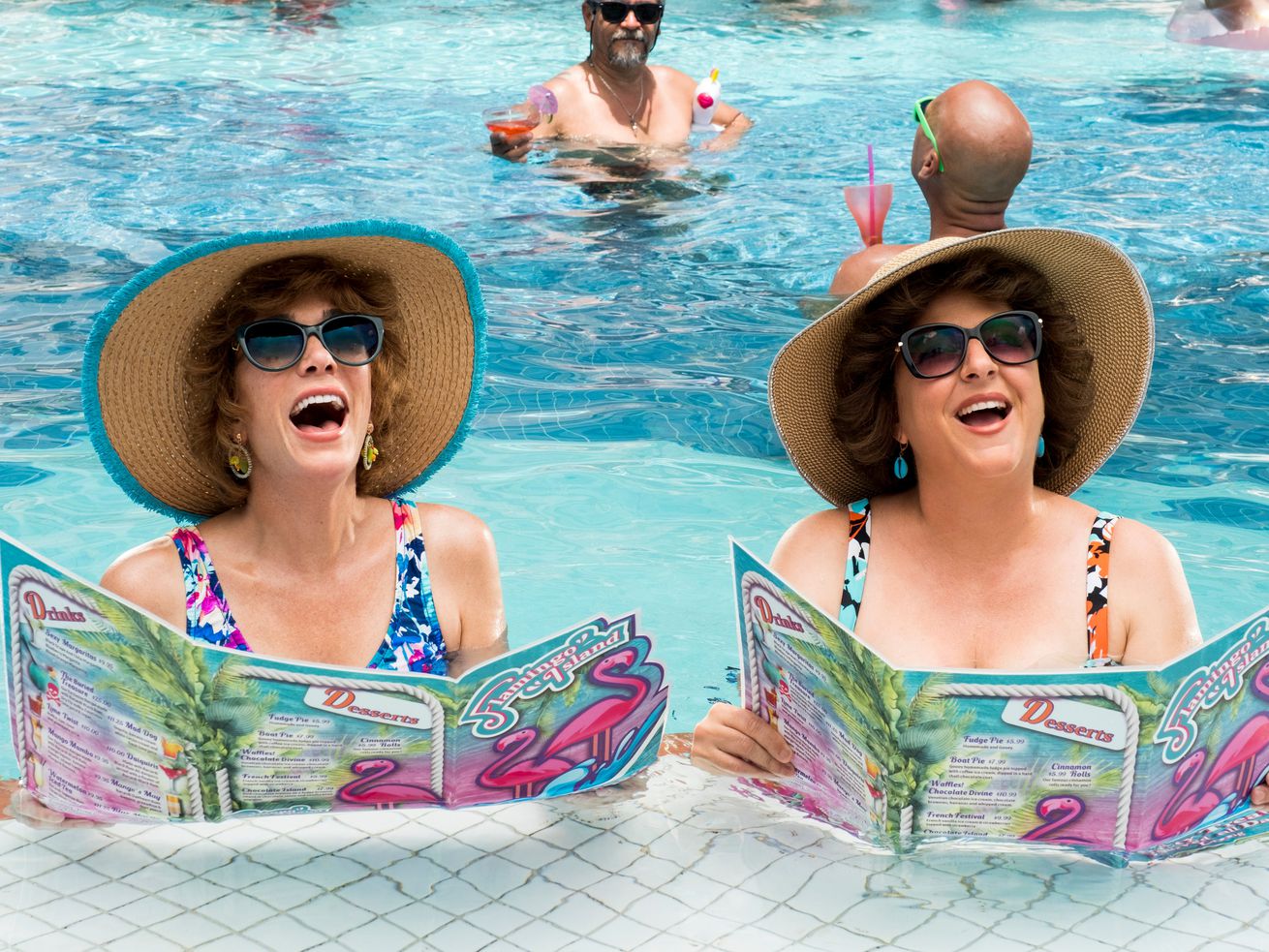 Kristen Wiig and Annie Mumolo reunite a decade after Bridesmaids for a movie that’s as refreshing as a beach vacation.

After I watched the Bill and Ted movies last year for the first time (I know!), I wrote about how much I appreciate that kind of sweet kookiness in comedies — the sort of story ideas you simply can’t imagine a filmmaker pitching today, let alone a studio executive greenlighting. Studio comedies from the 1990s are, on balance, significantly weirder than the dwindling number of comedies on offer thus far in the 2020s (up to and including everything that stars Will Ferrell). The characters are stranger; the situations are more implausible; the jokes are more off-beat, more aimed at a niche audience. And I miss them.

So, Bill and Ted: Meet Barb and Star, the dynamic duo at the center of one of the stranger and more delightful modern comedies to hit — well, normally I’d say the “big screen,” but the movie is not launching into a big-screen-friendly era. Your TV screen, then. Like last year’s odd but entertaining Eurovision Song Contest: The Story of Fire Saga, Barb and Star Go to Vista Del Mar suffers a little from not being able to watch it in a room full of people primed to giggle and snort-laugh their way through its jokes. But it’s still a lot of fun.

The sing-songy title announces the movie’s tone: This is a tale of two middle-aged ladies who go to Florida for some fun in the sun and, inevitably, some adventures. Those ladies are played, respectively, by Annie Mumolo and Kristen Wiig, who also wrote the film (directed by Josh Greenbaum). Mumolo and Wiig’s last team effort, a decade ago, was the smash hit Bridesmaids. That film generated a lot of chatter about women-centered comedy, especially of the gross-out variety. (It also made a lot of money.)

Barb and Star Go to Vista Del Mar doesn’t seem destined to set off anything so earth-shaking; it’s really just here to have a good time and get a tan. Barb and Star are lifelong best friends, who work together at Jennifer Convertibles (you know, the couch store) in a Midwestern strip mall. They’ve also been roommates since Barb’s husband died and Star’s husband left, sleeping in twin beds in the same room, Bert and Ernie–style. They belong to a “Talking Club” led by a friend named Debbie (Vanessa Bayer, in an incredible bit performance) and make “hot dog soup” for their guests when it’s their turn to host.

But one day they abruptly lose their jobs because, as their rueful manager says, the Jennifer Convertibles company went out of business months earlier but nobody remembered to tell them. Cut loose and a little unmoored, they have a chance encounter with an acquaintance who’s just returned from a life-changing vacation in a far-off land: the small Florida beach town of Vista Del Mar. Barb and Star have never left home before. But throwing caution to the wind, they decide to travel there in search of rest and adventure.

There’s a second story in the film, too, centered on a shadowy villain with a weird vendetta against Vista Del Mar. Also played by Wiig, channeling Tilda Swinton, the character is rooted in cartoonish childhood trauma, and she’s ready to launch an attack on the town. Her paramour, a goofy young man named Edgar (Jamie Dornan), is ready to do her bidding, and so he, too, is in Vista Del Mar. When he meets Barb and Star at the hotel bar, things start to get pretty wild.

A familiar template: Two innocents “abroad” accidentally stumble onto a plot to destroy the world and inadvertently foil it. Except the plot has significantly less life-or-death urgency than world destruction, and Barb and Star aren’t rubes; they’re just really happy to be doing whatever they are doing. These low stakes are their own kind of meta-joke, in a world where seemingly every movie is about some villain or another trying to obliterate humanity.

And yet the plot of Barb and Star Go to Vista Del Mar is almost beside the point. Wiig and Mumolo are predictably hilarious, bewigged and in pitch-perfect wardrobe (Barb and Star are so obsessed with culottes that the movie starts with text giving the dictionary definition of that very particular clothing item). A sequence in which the women spend their entire plane ride talking about their conception of a perfect woman they’ve dubbed “Trish” follows a time-honored principle of comedy: First the joke is mildly funny; then it starts to drag on; then, suddenly, it becomes hysterical.

And the film is loaded with bizarre little flourishes that make it sing, literally. There are two full-on song-and-dance numbers in this movie — only two, not enough to make it a movie musical, but two more than you’ll find in your average feature film, which means it enters a kind of movie-musical uncanny valley. There are positively delightful cameos throughout, which I won’t spoil. There’s a great love of the kind of shell-based jewelry you buy off a cart on the beach, and cocktails that deliver that special vacation three-fer hangover, from the rum and the sugar and the food coloring.

And most of all, there is Jamie Dornan, who is so perfectly cast that he’s a gag unto himself. He is, of course, incredibly handsome, and also Irish, traits that go a long way toward attaining “object of desire” status no matter what. But he is also Jamie Dornan, still best known for playing Christian Grey in the Fifty Shades movies, and that means he’s a flawless synecdoche for middle-aged womanly desire, whether he’s pining for the villain who’s taking advantage of him or dancing in the sand and singing to the seagulls.

Because, yes, Barb and Star want him, and more broadly, they just enjoy things like flirting and sex and handsome men. It’s matter-of-fact; they use words like “labia” without flinching and aren’t embarrassed by sex. Refreshingly — and probably because the screenplay was written by two women in their late 40s — Barb and Star Go to Vista Del Mar pokes fun at aspects of being a standard-issue Midwestern middle-aged white lady (the fashion, mostly) without making the women themselves objects of ridicule. They’re heroines, actually, and desirable ones, too.

Watching Barb and Star Go to Vista Del Mar was the closest I’ve come in a long time to feeling like I was on vacation. I chuckled, mostly, and giggled a little, and got to check out of life for a while without the feeling of leaving my brain at the door. A tiny break and a bit of an adventure and a bunch of clever jokes that border on the bizarre: That, to me, is a recipe for a good time.

US airstrike kills Iranian Gen. Qassem Suleimani: what we know
Trump, Biden, and the war over American masculinity
The best $14 I ever spent: A plastic kiddie pool
CNN is giving 2020 Democrats 7 hours to talk about climate change
Performative masculinity is making American men sick
The future of the vote