The government keeps its use of facial recognition tech secret. The ACLU is suing. 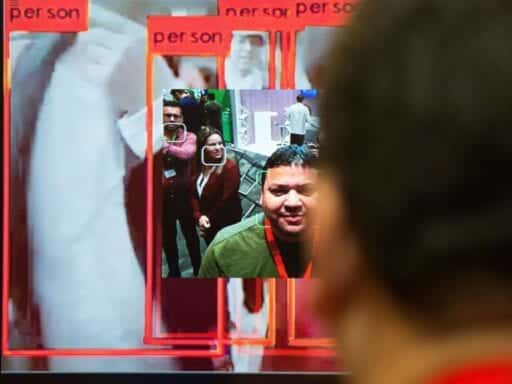 Share
Loading...
A man orders coffee with the help of a face-recognition system at a stand of the AI Expo Africa in Cape Town. | Rodger Bosch/AFP/Getty Images

The ACLU is suing the FBI to find out what the government is doing with facial recognition technology. Dive in with this Reset podcast episode.

The ACLU is suing the FBI, the Department of Justice, and the DEA to get documents that explain how the US government is using facial recognition technology.

The lawsuit came after the government denied the ACLU’s request for information not only about how it is using this technology right now but also about how it plans to use that technology in the future.

“At the end of the day, when the people are in control, the government doesn’t have a right to make decisions about us without our input. But it’s hard to have input when you don’t know exactly what the government is planning to do,” said Jennifer Lynch, the surveillance litigation director at the Electronic Frontier Foundation (a nonprofit that focuses on civil liberties in the digital world).

On this episode of the Reset podcast, host Arielle Duhaime-Ross explores what we do know about how law enforcement and the government use facial recognition, as well as what’s at stake given what we don’t know.

Today, nearly half of American adults are in facial recognition databases.

Russell Brandom, policy editor at The Verge, explains that the government first started with DMVs running facial recognition on all the photos in their system to see if any of them were the same person, “usually because it was Social Security fraud”:

But it’s not quite so simple.

As Duhaime-Ross points out, big tech companies like Amazon and Microsoft have been selling facial recognition tech to various companies for business purposes while Amazon is also selling its facial recognition capabilities directly to law enforcement agencies, despite the fact that most citizens have never consented to their faces being used for these purposes.

That’s where the ACLU’s lawsuit comes in. Lynch says there’s currently a lot of secrecy surrounding how law enforcement is using facial recognition tech in the US and any additional information will help those who are trying to pass laws that’ll stop it from taking root in their communities:

A few years back, we got access to a PowerPoint presentation that the FBI gave. And in that PowerPoint presentation, they talked about sometime in the future wanting to be able to track people as they move from event to event. But we don’t know anything more about how far along they are in developing that kind of technology. So I think the ACLU’s lawsuit will get at information like that. Where is the FBI now or the Department of Justice or the DEA on implementing that kind of technology?

Listen to their entire discussion here. We’ve also shared a lightly edited transcript of ​Lynch’s conversation with Duhaime-Ross below.

You can subscribe to Reset on Apple Podcasts, Stitcher, or Spotify.

We haven’t seen face recognition come up too much in the court system yet. And I think that’s because it’s still somewhat novel technology in the United States.

[But] we have talked to Congress about different kinds of bills that could be put forward to protect Americans from face recognition. We’ve been involved at the state and local level to pass laws that would ban face recognition or put a moratorium on the use of face recognition for a few years.

We also filed a couple lawsuits in the past to learn more about how the FBI was using face recognition. And those were Freedom of Information Act lawsuits, which are similar to what the ACLU has filed.

What we learned at the time was that the FBI had been doing these sort of backroom deals with the states to get access to their mugshot databases and build up the FBI’s own face recognition database. And all of that was without explaining what they were doing to the American public.

A few years back, we got access to a PowerPoint presentation that the FBI gave [in which] they talked about sometime in the future wanting to be able to track people as they move from event to event. But we don’t know anything more about how far along they are in developing that kind of technology.

So I think the ACLU’s lawsuit will get at information like that: Where is the FBI now or the Department of Justice or the DEA on implementing that kind of technology?

The other interesting thing about this ACLU lawsuit is that they aren’t limiting their request to face recognition. They are also interested in other forms of remote biometric identification technologies.

If I’m a law-abiding citizen, why should I be at all curious about how the US government is using this technology?

I don’t know that we can say that what the federal government is doing with face recognition is not going to affect us, even if we are law-abiding citizens.

Right now, the FBI has access to DMV photos in something like 20 to 30 states. I would argue that most of the people in those DMV files have not done anything wrong and yet they are being subjected to criminal searches without their knowledge [or] consent. And that could identify them as criminals or as suspects in a crime, because face recognition technology is not 100 percent accurate. So somebody could be identified for a crime they didn’t commit.

I hear this argument all the time that “I have nothing to hide so why should I care what the government is doing?” I think there are a couple other responses to that.

First, we need to all stand up for people who are constantly surveilled by law enforcement. I think we all know that communities face different kinds of surveillance depending on people, the color of people’s skin, depending on how people pray. And we all need to stand up for people like that, because people who are in those communities, they haven’t done anything wrong either but they are being subjected to excessive surveillance.

I think the other argument I hear that somebody has nothing to hide. We all have something to hide. That’s the reason that we don’t let the government have cameras in our house. We need to have the ability to have privacy in our lives, to develop our thoughts and our beliefs. And it’s fundamental to living in a democratic society. We can’t really form our ideas about the government. We can’t think about how we feel in a society if the government is constantly watching us.

One thing that really struck me in what you just said was that you referred to the use of facial recognition technology as a form of search, law enforcement searching you, your body yourself. And I honestly don’t think that I personally have ever really thought about it in that specific way — that this is a search. Is that truly how we should think about this?

I think it is, depending on how it’s being used. So, for example, if law enforcement is trying to identify somebody from a photograph where they don’t know that person’s identity, who that person is, and they believe that that person has been involved in some sort of criminal activity, then they’re going to search a database to identify who that person is. And that is definitely a search. And it’s something that the Supreme Court has determined to be a search in other contexts.

What exactly is the FBI’s reasoning for not sharing information about how they use facial recognition technology?

We haven’t seen that yet. So as part of this lawsuit, the FBI will have to file what’s called an answer, and they will do that 60 days after the ACLU has filed their complaint. And in that answer, the FBI might explain why they haven’t responded. But really what we’ll probably see over the next year or so is that the ACLU and the FBI will talk more about how the FBI is going to produce records in response to the ACLU lawsuit.

We’ve also heard that this technology isn’t the most accurate. What happens when law enforcement uses it to implicate someone of a crime that they’re not actually guilty of? How should we think about that?

In the United States, we have a rule that people are innocent until proven guilty. And if you are identified through a technology, that means that the state has decided that you are a suspect for a crime and it shifts the burden onto the person who is under suspicion to prove that they aren’t that person who committed the crime. That’s very different from how our criminal justice system is set up. The government should have to prove you’re guilty, not the other way around.

So it kind of sounds like if this is how things go down, this technology has the power to undermine the fundamental tenets of our justice system.

So what the ACLU is doing by asking these questions of the FBI, by trying to get more information on how the US government as a whole is using this technology, is that one way to prevent that future?

Listen to the full episode and subscribe to Reset on Apple Podcasts, Stitcher, Spotify, or wherever you listen to podcasts.

Sanders tops another poll just before the Iowa caucus
Sacha Baron Cohen’s political provocations are exhausting and dangerous
Russia’s Vladimir Putin just got one step closer to being president for life
Democratic primary polls are showing a 3-way race going into the third debate
How abortion in Virginia went from a Trump talking point to a winning issue for Democrats
Kamala Harris’s mysterious Kasowitz question during the Kavanaugh hearings, explained