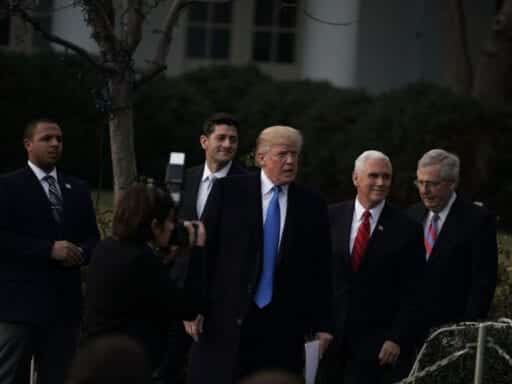 Six months after the Republican tax bill passed, the people who wrote it are cashing out — but not with new, higher tax savings. They’re leaving their government jobs and becoming lobbyists.

Alan Rappeport at the New York Times reported on the high number of Trump administration officials and congressional lawmakers taking consulting and advisory jobs now that the tax bill has been passed. They’re not technically registered as lobbyists because they’re barred from doing so by an executive order meant to discourage the political revolving door, but it’s what they’re doing. And they’re making a lot of money in the process.

More than a dozen people heavily involved in the drafting of the GOP tax bill — which slashed the corporate tax rate to 21 percent from 35 percent and delivered across-the-board tax cuts that broadly favored the wealthy — have gotten into the lobbying business, the Times reports.

Shahira Knight, deputy director of the White House’s National Economic Council, was hired by the Clearing House Association, an advocacy group that focuses on financial regulation. Drew Maloney, assistant secretary for legislative affairs at the Treasury Department, will become the president and CEO of a private equity lobbying group. Mark Prater, tax counsel to the Senate Finance Committee, joined advisory firm PricewaterhouseCoopers in June. And the list goes on.

The revolving door isn’t a new concept, but Trump famously promised to “drain the swamp” on the campaign trail.

The tax bill was passed hastily, meaning there are still a lot of details to hammer out and glitches to be fixed, and that makes a space for interested parties to have an input. Per the Times:

The Internal Revenue Service is in the process of determining guidance on several provisions of the tax law that remain murky. Perhaps the most important one is who qualifies for the lower tax rate for “pass through” businesses — entities whose tax liability is borne by the owners on their personal tax returns.

The people who wrote the tax bill can also provide corporations and lobbying groups insights on how to get the most out of the law’s new provisions. Plus, Trump has talked about a potential second tax bill that would lower the corporate tax rate even further and make individual cuts set to expire permanent, leaving space for lobbying, too.

Soon after taking office, Trump signed an executive order that barred executive branch employees from registering as lobbyists for five years after leaving government. It doesn’t stop them from taking private sector jobs, or from informally lobbying the administration. Essentially, they just can’t fill out the “I’m a lobbyist” paperwork.

That has exacerbated the “shadow lobbying” industry for former administration officials. They’re engaging in lobbying activities, they’re just calling themselves consultants instead. Under federal law, a lobbyist has to register only if he or she spends 20 percent or more of his or her time on lobbying activities in a three-month period.

As the Times points out, that government players turn to lobbying after major legislation is passed isn’t a new phenomenon — it happened after the Affordable Care Act was passed under Obama, but perhaps to a lesser degree. Republican’s aren’t expected to do well in the 2018 midterms, and right now is a prime time for staffers to get out before things go south.

It is also worth noting that Trump doesn’t appear to be particularly married to his “drain the swamp” promise or anti-lobbying push. In the first four months of his administration alone, he granted more waivers than Obama did in eight years for former lobbyists joining his administration. Now, lobbyists are moving in the opposite direction, and they’re not facing consequences there, either.

Trump just issued an ultimatum to the Venezuelan military: abandon Maduro or else
The US is plagued by long voting lines. Here’s how other countries do it better.
Silicon Valley’s top investing firm has a stark message on coronavirus: Prepare for the worst
The economy is growing. Democrats want to know who’s benefiting.
NATO Summit 2018: Trump meets with world leaders in Brussels
The Democratic primary has a legitimacy problem