The government’s top student loan watchdog is quitting in protest 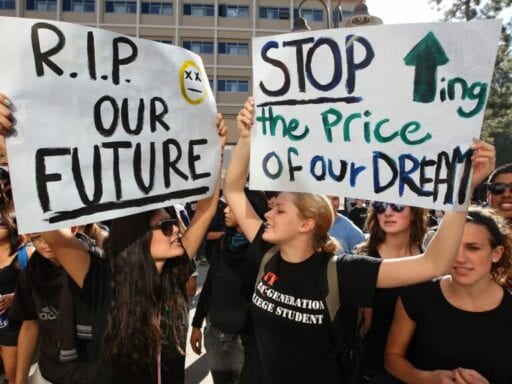 The federal government’s top official charged with protecting student loan borrowers announced his resignation on Monday, saying the Trump administration is making it impossible for him and other career staffers to do their job.

Seth Frotman, the student loan ombudsman at the Consumer Financial Protection Bureau (CFPB), wrote in a scathing letter on Monday that bureau leadership “has turned its back on young people and their financial futures.”

The letter, to acting CFPB Director Mick Mulvaney and other leadership, accuses the agency of siding with business interests over the consumers it is supposed to protect — including suppressing a report on how banks were ripping off students.

“Under your leadership, the Bureau has abandoned the very consumers it is tasked by Congress with protecting,” Frotman wrote. “Instead, you have used the Bureau to serve the wishes of the most powerful financial companies in America.”

The Associated Press was first to report Frotman’s resignation. NPR published the letter in full.

The student loan ombudsman is supposed to make sure that students who have taken on debt to pay for their education aren’t being scammed or abused by banks or loan servicers.

Frotman has served as the CFPB’s student loan ombudsman and assistant director for the Office of Students and Young Consumers since 2016. He’s been at the CFPB, the consumer protection agency established under the Dodd-Frank financial reform, since 2011. His resignation, which takes effect Friday, is the latest fallout as the Trump administration has reshaped the CFPB, trying to rein in the agency that is supposed to protect consumers against big financial institutions.

“At every turn, your political appointees have silenced warnings”

Frontman says the bureau under Mulvaney has undermined its protection for student loan recipients — so much so that he can’t do his job.

The vast majority of student loans in the US are made by the federal government itself, through the Education Department, which lends directly to students. The department then contracts with private companies, called loan servicers, who manage the relationship with loan borrowers. The bureau accepted and publicized complaints about these servicers, essentially shining a spotlight on a problem the Education Department could address.

But in September 2017, the Education Department said it would stop sharing student loan information with the CFPB, calling the regulator “overreaching and unaccountable.”

By doing so, the Education Department “unilaterally shut the door to routine CFPB oversight of the largest student loan companies,” Frotman wrote.

In his letter, Frotman outlined a number of areas where he said the administration had abandoned its law enforcement duties and folded to political pressures. The bureau has not been able to act independently under Mulvaney, Frotman said. When the Trump administration’s actions have opened student borrowers up to risks, he said, Mulvaney and other new leadership blocked efforts of career staffers to communicate to consumers and other departments about it,

“At every turn, your political appointees have silenced warnings by those of us tasked with standing up for servicemembers and students,” he said.

“American families need an independent Consumer Bureau to look out for them when lenders push products they know cannot be repaid, when banks and debt collectors conspire to abuse the courts and force American families out of their homes, and when student loan companies are allowed to drive millions of Americans to financial ruin with impunity,” he wrote.

Under Mulvaney’s predecessor, Richard Cordray, Frotman and the office he heads coordinated a government-wide effort to reform the student loan market and heavily influenced law enforcement and oversight work in the space. The CFPB’s student loan office has returned $750 million to harmed borrowers since it was created. But since Mulvaney took over, career staffers have found it difficult to do their work.

Randi Weingarten, president of the American Federation of Teachers, in a statement reacting to Frotman’s resignation said that while the union commends his decision to step down, “we mourn the attacks on the CFPB and an end to the politicization of this vital agency.” She continued, “The CFPB must return to its historic mission to protect the powerless, rather than shielding the bad actors preying on them.”

Mulvaney is on quite a tear over at the CFPB

Since becoming the bureau’s acting director in November, Mulvaney, who is also director of the Office of Management and Budget, has undertaken multiple measures to scale back the CFPB and, his detractors say, undermine its mission.

He has reportedly scaled back an investigation into the Equifax data breach, relaxed restrictions on often predatory payday lenders, and recommended Congress pursue sweeping changes to the CFPB’s powers. He disbanded all of the bureau’s advisory boards and councils and even pushed to change the agency’s acronym to the BCFP.

Mulvaney, who while in Congress in 2014 called the CFPB a “sick, sad” joke, has often argued he’s just sticking to the rules, saying he’ll do what the law says he has to, but no more. Mulvaney’s sticking-to-the-statute line has also resulted in the bureau rolling back supervision of predatory payday lenders for targeting active military members as is mandated under the Military Lending Act.

Frotman’s resignation suggests Mulvaney is siding with financial industry interests over yet another vulnerable group: students saddled with enormous amounts of debt. It also signals where the CFPB might be headed on Navient, one of the country’s largest student lenders. The bureau, headed by Frotman’s office, is currently suing the company.

As the AP reports, the Navient lawsuit has been bogged down by bureaucratic wrangling, as Education Secretary Betsy DeVos has been unwilling to help the CFPB with its case. The CFPB in January 2017 sued Navient, formerly part of Sallie Mae, saying it had illegally cheated borrowers out of repayment rights. The bureau has accused the Education Department, under DeVos, of refusing to authorize Navient to turn over documents it needs to show the company’s misbehavior and the harms it caused.

The Senate Banking Committee voted last week to advance the nomination of Kathy Kraninger, who would be Mulvaney’s permanent replacement at the CFPB. A full Senate vote on her could take place as early as this week.

Sorry, but Democrats need to talk about Hunter Biden
The one where the Friends logo won’t go away
Trump gave congressional Republicans the deniability they crave
How voice actors are fighting to change an industry that renders them invisible
What does Alexandria Ocasio-Cortez’s win mean? There’s a debate.
Trump escalates trade war rhetoric with threat of European auto tariffs