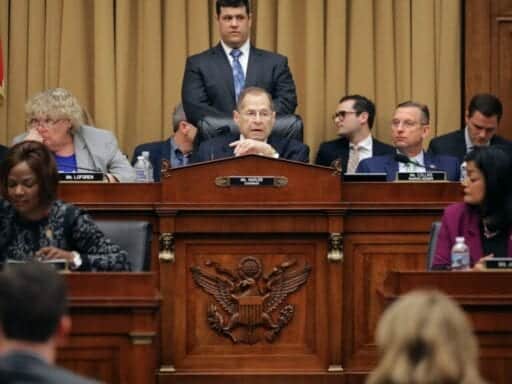 The committee will formalize its plans for its impeachment inquiry next week.

The House Judiciary Committee is planning to formalize its impeachment investigation into President Donald Trump by voting on a resolution outlining rules for the inquiry next week. The vote may end months of confusion over how — and whether — House Democrats plan to move forward with the probe in the shadow of the upcoming presidential election.

A source close to the committee said the vote is intended to increase the “officialness” of the investigation, Politico reported. The probe has been ongoing for months, but has long been muddled by semantic debates over whether a formal impeachment inquiry has already begun, and substantive debates about what the committee hoped to achieve through its investigation.

The committee has, for example, already called witnesses and sued the White House for blocking one of its subpoenas. Witnesses have been slow to comply to the committee’s requests for testimony, however, slowing the pace of the investigation. Proponents of the probe hope that by defining it, the committee might be better able to compel hesitant witnesses to testify, while also gaining access to top Trump aides currently shielded by the president’s claims of immunity.

A growing segment of the party’s base has is calling for impeachment to get underway; however, party leaders like House Speaker Nancy Pelosi have been hesitant to launch the impeachment process knowing the Republican-led Senate would never pursue an impeachment trial. Party leaders have also worried about the effect an impeachment attempt could have on Democrats in purple states. Formalizing the inquiry could help Democrats navigate this tension between the base and leaders, giving those calling for some action on impeachment what they want without forcing all members of the House — including Democrats in swing districts — to vote on the issue.

The impeachment investigation to date

The pressure for Judiciary Committee chairman Rep. Jerry Nadler (D-NY) and House Democrats to clear up the scope and weight of their investigation into the president has been building for a while.

In March, Nadler said his committee would look into “alleged obstruction of justice, public corruption, and other abuses of power by President Donald Trump, his associates, and members of his Administration.” He sent record requests and subpoenas but stopped short of “opening a formal impeachment inquiry.”

As Vox’s Andrew Prokop reported, the House’s pro-impeachment faction began arguing in July that the Judiciary Committee can conduct an investigation and both write and vote on articles of impeachment without opening a formal inquiry.

But Nadler continued to waffle, refusing to define the scope and aims of the investigation. Last month, he went on CNN and said the Judiciary Committee was in the middle of “formal impeachment proceedings,” but in the same interview said “I think it’s important not to get hung up on semantics.”

Those numbers have grown since former special counsel Robert Mueller spoke before Congress in July. But as Vox’s Ella Nilsen and Andrew Prokop point out, that doesn’t exactly mean all those members would actually vote to impeach Trump. Voting to impeach would be a more complicated decision, embodied by the continued hesitance of House Speaker Nancy Pelosi to support calls for impeachment:

Supporters of an impeachment inquiry are still being met with resistance from House Speaker Nancy Pelosi. She’s offered a variety of different reasons for her opposition to the move. But she likely believes (as most do) that there’s zero chance the Senate will remove Trump from office, and therefore fears a controversial impeachment vote would harm House Democrats representing districts that voted for Trump — something that could put her majority at risk.

Estimates on how many Americans support impeachment vary, but polls indicate a majority do not support impeaching Trump. That fact puts many Democrats in vulnerable districts on edge, especially given they have history to warn them: Republicans who impeached former President Bill Clinton in the 1990s lost seats in the House and barely gained seats in the Senate, a decline experts later attributed to their pursuit of impeachment.

Rep. Mary Gay Scanlon (D-PA), the vice chair of the House Judiciary Committee, told Vox’s Ella Nilsen that history is very much on Democrats’ minds as they consider impeachment.

“We also have lessons from the Clinton impeachment that when you do impeachment for primarily political reasons, that also causes problems for the country,” she said. “This is not something the country can enter lightly, but by the same token, the country cannot have a president that undermines the rule of law.”

On the other side of the issue are Democrats at the grassroots level who want impeachment to proceed regardless of potential consequences. And they are joined by Democrats in the the House who haven’t been shy about their feelings, as Vox’s Ella Nilsen notes:

Democrats know their best shot at getting rid of Trump is the 2020 presidential election. But at the same time, special counsel Robert Mueller laid out numerous instances of potential obstruction of justice by Trump in his report, and Democrats know they can’t just ignore it. The progressive wing of the Democratic Party has been vocally pushing for impeachment proceedings, but they need buy-in from committee chairs and House leadership.

The upcoming Judiciary Committee vote, which could happen as early as Wednesday, could help to get various factions of Democrats on the same page. While those who are hesitant to endorse impeachment will not suddenly give it their full-throated support, there will be new clarity as to what Nadler’s committee is doing, and where it sees the investigation going. And as Prokop has noted, “no Democrats are against a continued investigation by Nadler of potential crimes by Trump.”

The real question will be whether Nadler’s probe actually goes anywhere; vote or not, he will still face resistance from the White House, and will be engaged in a politically fraught potential battle that has no indication of clearing up anytime soon.

Activist groups say it’s not time to march against a Trump coup — yet
Could this be Trump’s orange makeup?
Taika Waititi’s “anti-hate satire” Jojo Rabbit is up for Best Picture. Should it win?
The whiteness of anti-lockdown protests
N.K. Jemisin recommends stories from fellow groundbreaking sci-fi authors
Trump’s resistance to the impeachment inquiry is a genuine constitutional crisis