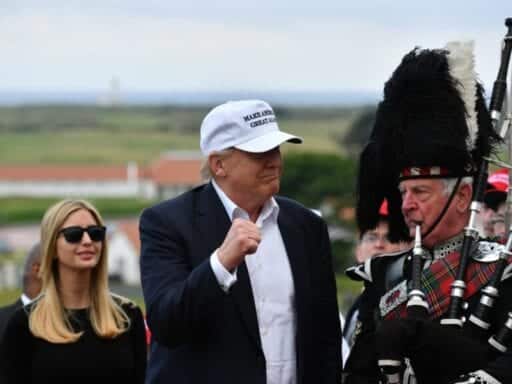 An investigation into the spending comes as Trump faces questions over his officials patronizing his properties.

The House Oversight Committee is investigating military spending at an airport near a Trump property in Ayer, Scotland, as well as visits to that property by service members, in the latest of a growing number of inquiries into government expenditures that seem to financially benefit President Donald Trump and his businesses.

The military has spent $11 million on fuel alone at the Prestwick Airport near Trump’s Turnberry resort since fall of 2017, Politico reported. And reporting by the Guardian found the airport has provided discounted rooms and complimentary rounds of golf at the Trump resort for some US military members. The expenditures are unusual given buying fuel from Prestwick Airport costs the government (and, ultimately, taxpayers) more than refueling at military bases, such as the nearby Lakenheath Air Base in England.

And the stays at Trump resorts are equally as unusual and costly, as Politico’s Natasha Bertrand and Bryan Bender note in their account of the experiences of five Air National Guard troops who stayed the Turnberry resort this year while on a mission to Kuwait:

One crew member was so struck by the choice of hotel — markedly different than the Marriotts and Hiltons the 176th maintenance squadron is used to — that he texted someone close to him and told him about the stay, sending a photo and noting that the crew’s per diem allowance wasn’t enough to cover food and drinks at the ritzy resort.

The spending captured the attention of the House Oversight Committee, and in June, it sent the Pentagon a letter demanding an explanation. The Department of Defense, however, has refused to turn over any documents to investigators.

Trump has been under scrutiny since the beginning of his presidency for refusing to divest his interests in his businesses. And as recently as last week, when it was reported Trump suggested Vice President Mike Pence stay at one of his hotels during a visit to Ireland, the president has been accused of using his office to enrich himself.

In the case of the military spending in Scotland, lawmakers are concerned the stops at Prestwick are a means of propping up the president’s failing business venture at the expense of US taxpayers, given both the airport and the nearby Trump resort have been struggling for years. The two are interconnected as resort’s success in part depends on the airport staying open, the committee found.

Critics have questioned spending by US officials, companies, and foreign governments at Trump properties

Accusations that Trump has been improperly benefitting from his presidency have been nearly constant since he entered office.

The president has argued the fact that he has placed his financial holdings in a trust that he can access whenever he chooses protect him from conflicts of interest, but his critics argue his continuing to benefit from his hotels and resorts opens the door to corruption. They also claim that Trump may be in violation of the US Constitution’s “emoluments” clause, which bars public officials from accepting gifts from foreign parties given foreign officials have spent money at Trump properties.

Members of the Trump administration have done little to quiet these critics. Just this week, Vice President Mike Pence faced criticism because he chose to stay at a Trump hotel in Doonbeg, Ireland — 180 miles from his meetings in Dublin — during an official visit. The week before, reports surfaced that Attorney General William Barr plans to spend $30,000 on a Christmas party at Trump’s Washington, DC property, where he’s been spotted dining.

Corporations and foreign governments have also jumped on the Trump spending train: T-Mobile spent $195,000 at the DC hotel while its merger was pending government approval, lobbyists for the Saudi government spent $270,000 on rooms at the hotel in 2016 and later paid for hotel rooms for five days in Trump’s New York hotel that were expensive enough to boost its revenue 13 percent for the quarter.

As Vox’s Sean Collins reported, the spending by foreign nationals has spurred legal action that in turn has its own financial impact on the public:

In fact, concerns over foreign actors spending at Trump properties has spawned two lawsuits that argue the Trump administration has violated the Constitution’s emoluments clause, which prohibits payments and gifts from foreign governments. Those lawsuits are being paid for by taxpayers, as the Department of Justice is defending Trump, arguing that he has not violated that clause.

Trump has also clearly been spending plenty of time at his own properties as well. NBC found that the president spent 296 of his first 965 days in office at his own hotels, and Trump has shown he isn’t deterred by the criticism from ethics officials and lawmakers. For example, he’s pushed to host the next G7 summit at his resort in Florida. But as Vox’s Matthew Yglesias has noted, few investigations have been launched into these seeming conflicts of interest, in part because lawmakers have limited options for meting out punishment under the current make up of Congress:

Republicans won’t convict Trump of anything, Democratic leaders don’t want to push an impeachment process that polls poorly, and those who do favor an “impeachment inquiry” have something more complicated in mind than standing up for the obvious principle that the president can’t line their pockets.

This makes the Oversight Committee’s inquiry a rare probe into possible corruption by Congressional officials; however, without the Department of Defense’s cooperation, it’s difficult to see how the inquiry could proceed.

“The committee will be forced to consider alternative steps if the Pentagon does not begin complying voluntarily in the coming days,” an aide told NBC. In the meantime, Trump’s businesses will continue to rake it in.

Rudy Giuliani remembers 9/11 by tweeting a violent, creepy clothing ad
How a basic income experiment helped these Kenyans weather the Covid-19 crisis
Biden’s “all of government” plan for climate, explained
The need to read black literature that’s not just about black struggle
The silent “sixth” sense
Is it ethical to hire babysitters, delivery services, and cleaners right now?